Optimist Worlds Ends with No Wind & No Racing 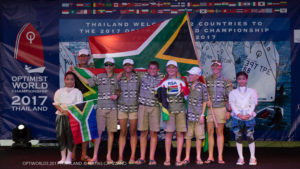 The Optimist World Championship 2017 ended successfully with all 281 young sailors from 62 countries contributing to make the event a resounding international success.

Marco Gradoni of Italy was crowned the World Champion for 2017.

Team USA were crowned as the Best Nation and Best Team Racing champions.

On the morning of the final day’s racing, sailors prepared to launch in listless conditions, hopeful of sailing three more races. For the select few at the top of the fleet leaderboards, there was a sense of anticipation, a determination to hold on to (or improve) their result, and hope that the last day of racing would be a great one. The wind failed to show up though, and the final day’s racing was cut short at 14h00.