On This Day – 5 November. A Peek Into Our Sailing History 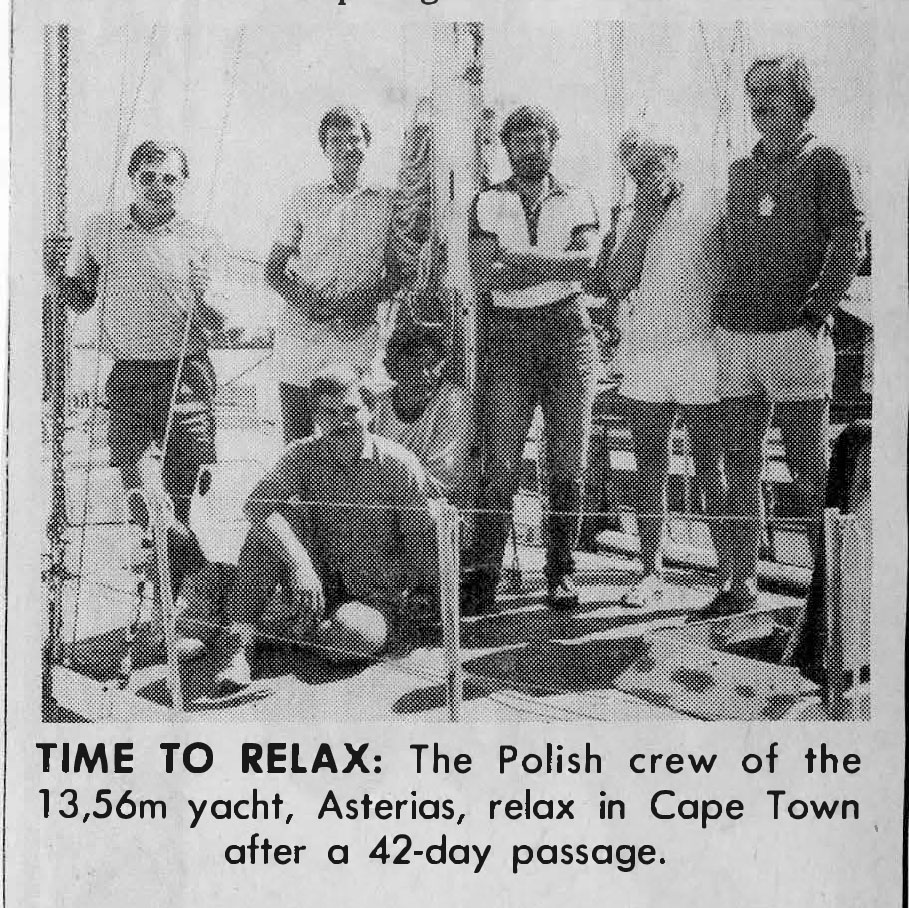 One aspect of our sport few give any thought to is that sailing is a sport one can participate in from a very young kid until old age. There is no better example of this, which is highlighted today, by the fact that 62-year-old Harry Mitchell, the oldest skipper in the BOC Solo race was due into Cape Town.

“Cudmore’s Cunning Saves Crusader” said the headline, as she beat the Canadian yacht by less than a second in the America’s Cup.

Two Polish yachts arrived at Royal Cape Yacht Club, one from Salvador and the other from Madeira.

Mossel Bay Yacht & Boat Club, which was sadly evicted from its premises in recent years, had its opening cruise which was attended by the Mayor of Mossel Bay.

1986. “Oldest Skipper is Due in Today”. The oldest skipper in the BOC solo round-the-world race, Harry Mitchell, is expected in Table Bay early this morning.
To read the full report, Click on the following LINK:  1986 11 05 173

1968. “Cudmore’s Cunning Saves Crusader”. British yacht ‘White Crusader’ beat ‘Canada II’ by less than a second in the America’s Cup yesterday to record the narrowest victory in the history of 12m match racing.
To read the full report, Click on the following LINK:  1986 11 05 542

1987. “UCT Law Student Latest Entrant in Dias 500 Race”. The latest entrant in the Bartholomeu Dias 500 anniversary race, which retraces the original route from Lisbon to Cape Town, is UCT law student Patrick Holloway who will skipper the 41ft cruiser racer’s ‘French Connection’.
To read the full report, Click on the following LINK:  1987 11 05 1

1987. “Asterias Off in Wake of Tall Ships”. It is seldom that I take a turn around the colourful surroundings of the Royal cape Yacht Club (RCYC), but a few days ago I was moved to just that and the results were rewarding wrote Captain C J Harris.
To read the full report, Click on the following LINK:  1987 11 05 15_Redacted

1993. “Opening Cruise”. The opening cruise of the Mossel Bay Yacht and Boat Club took place last Sunday and was attended by the Mayor of Mossel Bay, Mr Johan Oosthuizen.
To read the full report, Click on the following LINK:  1993 11 05 198