On this Day 15 October. A Peek Into Our Sailing History 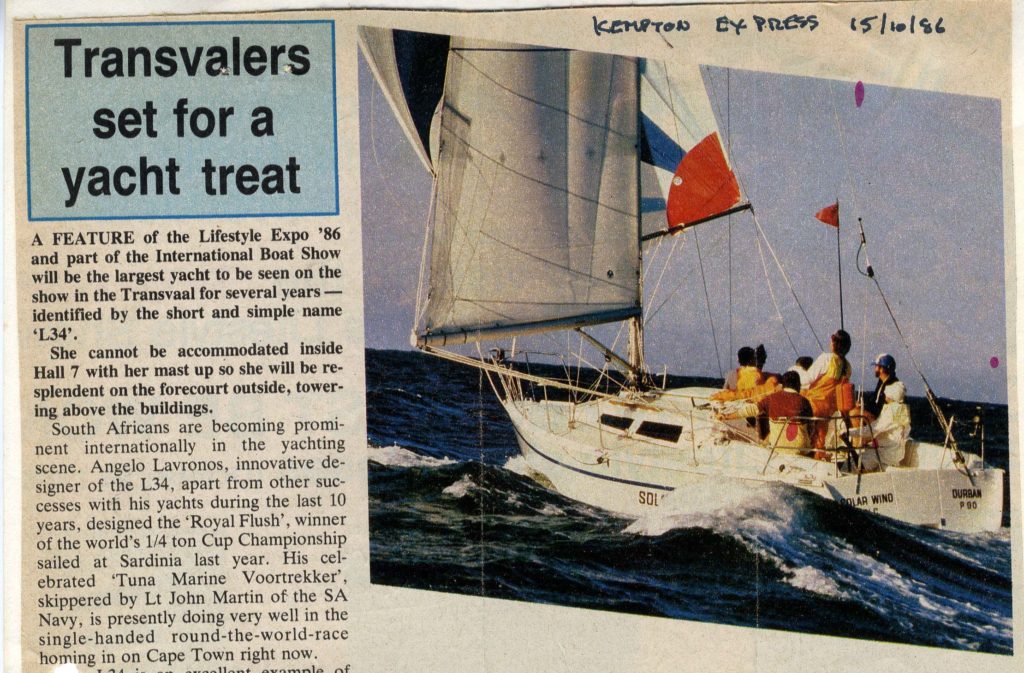 Yesterday I ran the cutting from 1989 entitled “Norwegian Freighter Saves Irish Yachtsman”. Well blow me down when Jeremy Bagshaw of Cape Point Rigging in Simonstown contacted me to say that he had passed the cutting on to Pat Lawless who intends doing the next Golden Globe Race to see if there was any connection. Well there is, as the Pat Lawless mentioned in the article is his father. Pat (junior) was thrilled to receiving the cutting and add it to the family archives.

So back to today where ‘Transvalers were set for a treat’, while Durban yachtsmen had their eyes set on the Rothmans trophy. There was no kiss and make up between Yves and Marc Pajot in the America’s Cup, and another yachtsman was in difficulty off our west coast. Zwartkops opened its season, while Hans Schroder was the star of the show at Midmar, and there was a ‘Happy start for America’s Cup Challengers’!

There lot’s to read today, so sit back, grab that mug of coffee and enjoy what’s on offer today.

1986. Durban Yachtsmen Have Eyes on Rothmans Trophy. Three Durban yachtsmen were determined to snatch the Rothmans Trophy – the biggest prize in South African yacht racing – from Cape Town in December. CLICK on this link to read all about it:  1986 10 15 120

1986. ‘Brothers in Yachting Duel’. Yve Pajot of ‘Challenge France’ protested Marc Pajot’s ‘French Kiss’ – which was sensationally disqualified in the America’s Cup Challenger eliminations! CLICK on this link to read all about it: 1986 10 15 516

1988. ‘Yachtsman Tells of 20-day Ordeal Off SA Coast’. For the first time since his heroic arrival at Luderitz in his 8-metre yacht, Mr Alain Kraft (33) yesterday described in broken English his ordeal at sea. CLICK on this link to read all about it:  1988 10 15

1992. ZYC Season Opens in Calm Conditions. Zwartkops Yacht Club opened its season last weekend in unusually moderate conditions. What caught my eye was some of the names mentioned in this report who are still active and prominent. CLICK on this link to read all about it:  1992 10 15 427 22

1995. ‘Happy Start for America’s Cup Challengers’. The challengers and defenders have started the 1995 America’s Cup campaign on good terms by agreeing to the format of the always bitterly contested international regatta. CLICK on this link to read all about it:  1995 10 15 427 24