On This Day – 11 November. A Newspaper History of Sailing 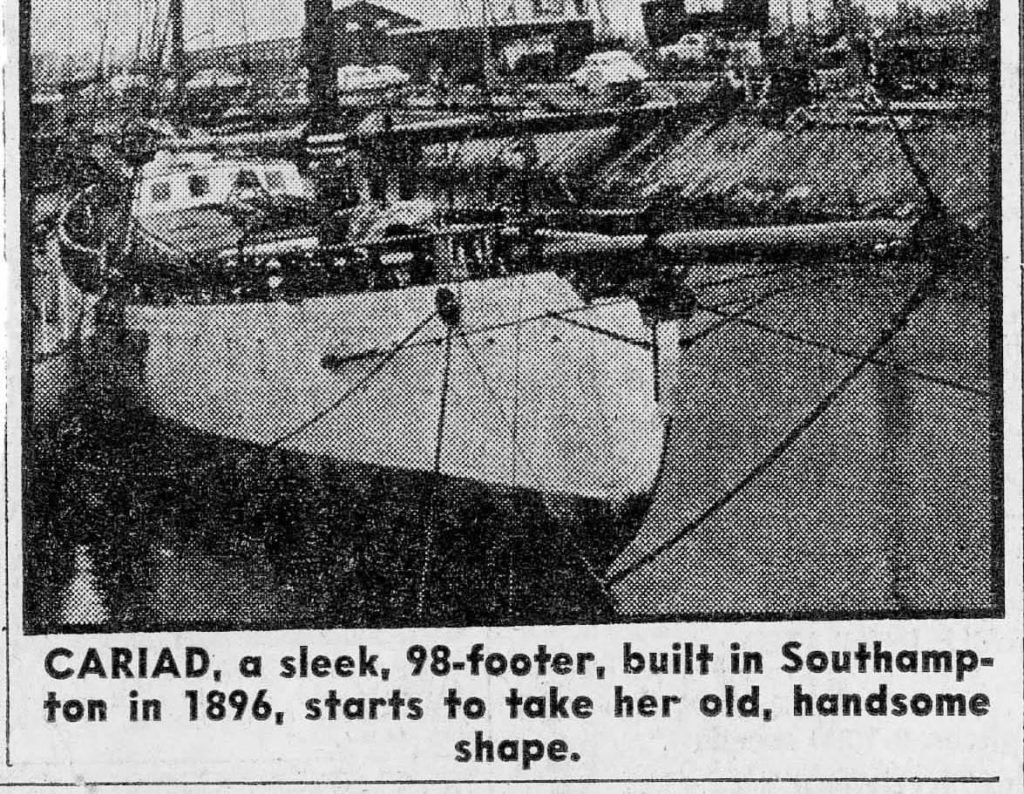 Remember ‘Cariad’? Well on this day in 1969 it was reported that her two year restoration was almost complete, and that she would head to the West Indies to do charter work.

And work of a different kind as this report tells how a world cruise for kids is just the thing to brighten up school.

I would have thought that nearly two months prior to the 1971 Cape to Rio race was too early to discuss “her route”, especially as ‘Mercury’ was newly launched?

But it was not too early to discuss the stiff competition looming for the 1989 Rothman’s Week.

And in 1992 an owner wishing to remain anonymous was preparing ‘Blue’ for the Rio Race.

Bertie Reed announced that he would be racing around the world for a fourth time, while Cape yacht clubs vied to stage the BOC Race finish.

Despite history showing that Durban offshore during the October to December period is NOT the time to host world championships due to the strong winds, the 505 and Flying Dutchman classes chose this time, and crews had to be rescued!

1969. “Two Years Hard Labour for A Dream”. After enduring bleak social lives on tiny incomes of R10 a week, five Durban yachting enthusiasts will soon be rewarded for two years of hard and unremitting labour. Next year they will take their world famous vessel, ‘Cariad’, to the West Indies to do charter work for an indefinite period.
To read the full report, Click on the following LINK:  1969 11 11 588 2

1969. “A World-Cruise – Just the Thing to Brighten Up ‘School’”. Getting tired of spending your week days at school, preparing for final examinations? Well, why don’t you end your school career cruising around the world in a luxury deep-sea yacht – writing exams through correspondence?
To read the full report, Click on the following LINK:  1969 11 11 607 4

1970. “Northerly Route to Rio for ‘Mercury””. Natal’s ocean racing yacht, ‘Mercury’, will probably choose the longer, northerly route from Cape Town to Rio de Janeiro in the international race in January, according to her skipper Bob Nuttall.
To read the full report, Click on the following LINK:  1970 11 11 310_Redacted

1989. “Stiff Competition Likely As Rothman’s Week Looms”. Exciting racing is on the cards with the Rothman’s Week Regatta in Table Bay around the corner to wake up local yachties.
To read the full report, Click on the following LINK:  1989 11 11 380 4

1992. “Luxury Yachts Get Ready for Race to Rio”. The luxurious R2,2m yacht ‘Blue’ is the largest of five Port Elizabeth yachts that will be racing from Cape Town to Rio de Janeiro in Brazil next year.
To read the full report, Click on the following LINK:  1992 11 11 430 7_Redacted

1993. “Biltong Bertie to Sail in His 4th Boc Yacht Race”. Legendary single-handed yachtsman Bertie Reed intends sailing in his fourth BOC Round-the-World Challenge next year – but Cape Town is under threat of losing the race as a stop-over to Durban and South Africa could lose the race altogether.
To read the full report, Click on the following LINK:  1993 11 11 221

1993. “Cape Yacht Clubs Vie to Stage Race Finish”. The first leg of the BOC Challenge round-the-world yacht race will definitely end in Cape Town next year, but whether Royal Cape or Hout Bay will be the host club will not be decided until the end of the month.
To read the full report, Click on the following LINK:  1993 11 11 226

2000. “Yachts Rescued in Heavy Seas As Winds Break Up Regatta Training?” The crew of several yachts training for the 505 and Flying Dutchman Championships had to be rescued when their boats capsized in heavy seas off Durban yesterday.
To read the full report, Click on the following LINK:  2000 11 11 515