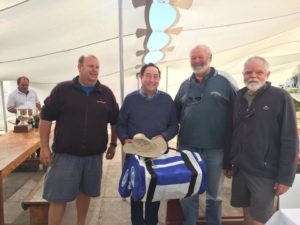 John Levin (holding the bag) with his crew.

Having a passion for offshore racing I always do my best to follow these races as best as one can. Regrettably for me, the tracker system was not up to scratch and kept losing the entire fleet or groups of boats at regular intervals, and which simply does not supply sufficient info. I suppose though that it was better than nothing!

I was impressed by one boat in particular – that being Indaba, the Stadt 34 sailed by John Levin.

Although only in Class C, he sailed fast up the West Coast, and showed his class a clean transom, and was not far off the elapsed time of some ‘racey’ boats. But more importantly, he sails with a crew all advanced in years, as is Levin himself. I have tons of respect for John who is simply passionate about his sailing.

Oh, and I forgot to mention that he won his class with both line and handicap honours.

The race was sailed using the ORC handicapping system, and the results showed some pretty close duels on handicap – showing that this system works.

Overall winner was Mike Hayton’s Nitro, which I am told averaged 16.7 knots for the first 4 hours of the race. They took both line and handicap honours overall, and won their class too.

Second overall was Hollard Jacana (Patrick Holloway) who was just shy of 15 minutes off the pace overall on handicap.

These three took the overall honours in Class A.

Class B was won by Yolo (Dale Kushner) from Nurth Witch and DARG Shadowfax.

Of the three multihulls, just two finished with Banjo taking the honours from SmartTri 40.

This race was sailed in honour of Rob Meek, a passionate offshore sailor.