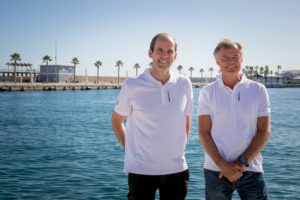 When the Volvo Ocean Race appointed Mark Turner to take the helm of this tough ocean race, those who knew his reputation were excited as they knew BIG changes were on the cards.

Sadly Turner pulled the plug on his tenure heading this race, but the announcement of Richard Brisius and Johan Salén, appointed as President and co-President of the Volvo Ocean Race, is likely to be a good one.

Former ‘Japie sailor’ Ant Spillebeen, has worked closely with Brisius and Salen, and has always made it very clear that these two are ‘top guys’ – and highly competent too.

The duo founded Atlant Ocean Racing together and have worked with seven Volvo Ocean Race campaigns over the past 28 years, starting as sailors in the 1989-90 race, before finding success with team management, including winning efforts EF Language (1997-98) and Ericsson 4 (2008-09), as well as second place finishers, Assa Abloy (2001-02), and Intrum Justitia (1993-94).

Most recently, the pair managed Team SCA, the all-female entry, in the last edition of the race.

“It’s an honour to be involved with my friends in the Volvo Ocean Race again. The race is at the very heart of the sport of sailing and it has formed the backbone of so much of my life,” Brisius said.

“At the core of the Volvo Ocean Race are some of the very best athletes in the world, racing in what I think must be the most relentless competition. Their efforts and determination inspire people across the world, and creates outstanding value for partners and host cities.”

Brisius is currently the CEO of the company owned by the National Olympic Committee, running Sweden’s bid to host the Winter Olympics and Paralympics in 2026 and he will remain in that role.

Johan Salén has worked alongside Brisius on all of their previous Volvo Ocean Race projects. He will take a leading role in both operations and in devising a strategy for the future of the event alongside the current leadership team.

“When we see what is happening on the water during Leg 2 from Lisbon to Cape Town, it is impossible not to be impressed by how the teams are performing and the way the race is being presented to fans and stakeholders,” Salén said. “And I have no doubt the next few months of this race will continue to be fantastic for our teams, sailors, and fans.

“Looking forward, it is clear we need to work closely with Volvo and all stakeholders, including future teams, sailors and commercial partners, to create something even greater for the future.

“I know that process is already underway with the existing leadership team. We all know the importance of setting a clear roadmap for the future in terms of event timing and class of boat as well as the commercial offering.”

Henry Sténson Chairman of the Volvo Ocean Race board, said he feels the experience Richard and Johan bring will benefit all stakeholders of the race.

“Both Richard and Johan have this race in their blood having competed as sailors and then working together to create and lead commercially successful and winning teams such as Ericsson 4 and EF Language,” he said.

“We believe this expertise on the team side is critical in terms of understanding what is required to make the race successful for teams and partners. We are confident we can now build on what has been put in place by Mark and his team to create a strong foundation for the future.”

The current Volvo Ocean Race leadership team will remain in their roles, working closely with Richard and Johan to deliver exciting racing for fans, and exceptional value for stakeholders.