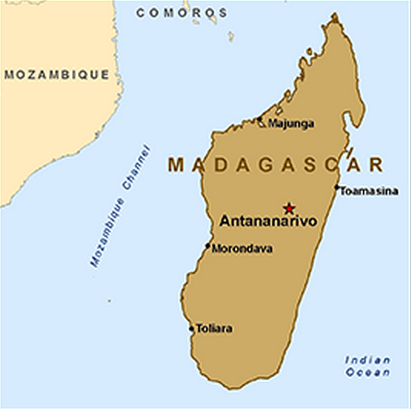 South African, Malagasy and French researchers have discovered the existence of a coastal current off Madagascar. The newly-described current, the South-west Madagascar Coastal Current, flows poleward off the south-west coast of Madagascar. Knowledge about and a thorough understanding of it will help scientists understand ocean circulation in the region and have direct implications for the management of local fisheries south of Madagascar.

“Revealing the existence of the new coastal current is an important discovery for South Africa as it adds to our understanding of the global ocean circulation and brings new insights about biological connectivity between the Madagascar and South African marine regions,” says Dr Marjolaine Krug, CSIR senior researcher.

The study forms part of the PhD of Heriniaina Juliano Dani Ramanantsoa of the Nansen-Tutu Centre for Marine Environmental Research, hosted at the Department of Oceanography at the University of Cape Town, titled, “Variability of coastal upwelling south of Madagascar”, which Krug supervised.

The research drew on the contributions of oceanographic experts from numerous institutions, including the CSIR, the University of Cape Town, the University of Western Brittany, in France, and the French Institute for Research and Development. The researchers combined in-situ and satellite observations with numerical model outputs to highlight the existence of a coastal poleward current located along the south-western coast of Madagascar. They found that the current is a relatively shallow (< 300 m) and narrow (< 100 km wide), warm and salty surface current with a transport volume comparable to that of the Leeuwin current, near Australia.

Ramanantsoa says he developed a strong interest in ocean dynamics and investigated the variability of upwelling south of Madagascar as part of his PhD studies. Upwelling is an upward motion of deep water bringing rich nutrients to the surface layer, promoting fertilisation.

Krug says the Southern Madagascar region is a transition zone between the tropical waters of the Indian Ocean and temperate waters off South Africa, with a high degree of endemism. She says the southern waters off Madagascar are very productive and support a wide range of migratory species, including seabird and cetacean and that therefore there is a direct biological link between the oceanic regions of Madagascar and South Africa.

Ramanantsoa says the new knowledge about the current has very specific value for players and decision-makers in the fishing industry. The fishing industry in South Africa and in a country like Madagascar is significant, with a huge impact on food security, employment and the ability to earn foreign exchange income.

The research was recently published in the journal “Geophysical Research Letters” and selected as a Research Highlight by the editorial team to be featured on https://Eos.org, as well as on the journal’s website.

Krug says that it is not easy to prove that one has found a new current and that they had to provide strong evidence for it to be accepted in a peer reviewed journal. “It is a rare opportunity to discover a new current in the 21st century. It is a significant finding for the global ocean community and a really amazing achievement for Juliano,” she says.

“As a Malagasy who grew up along this coastline, I have an intimate relationship with the current. I grew up with this current; it was such a big part of my life. Publishing the research was a truly emotional moment in my life,” says Ramanantsoa.