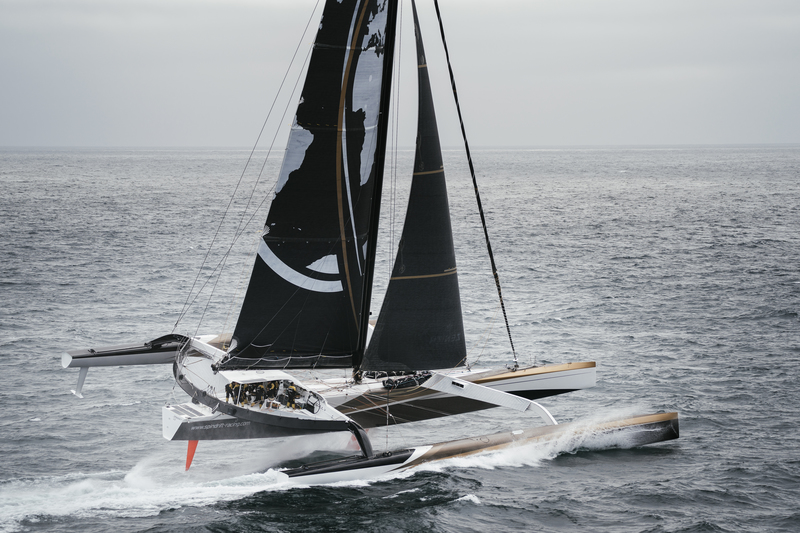 After two and a half months of stand-by, ‘Spindrift 2′ is preparing to leave for a new attempt on the Jules Verne Trophy. The crewed round the world sailing record has been held since 2017 by Francis Joyon, who completed the non-stop course in 40 days 23 hours 30 minutes.

‘Spindrift 2′, the giant black and gold 40 metre trimaran, is planning to leave the port of Brest for the start line off Ushant today.

The time of just over 40 days achieved by ‘IDEC Sport’ in 2017 could be broken by ‘Spindrift 2′, if the weather conditions remain favourable.

“We have been on stand-by since November 5 and there has been no real opportunity to get around the world quickly: I have never experienced a winter like this! We need to cross the equator in about five days – but we risk getting ahead of a front and having to sail to port, which is not very typical. But if we wait for this front to pass, we would then suffer at the hands of the Azores anticyclone. We are anticipating leaving the dock in Brest on Tuesday afternoon to reach the line off Ushant, and look to start in the early hours of the Wednesday morning, between midnight and three o’clock, but this is to be confirmed” said Yann Guichard.

By starting on Tuesday/Wednesday, the crew projects crossing the equator after five days and then hooking into a system in the South Atlantic, which could allow the team to cross the longitude at the Cape of Good Hope in less than twelve days. This is the system preferred by the land-based weather router, Jean-Yves Bernot, for the team to reach the Indian Ocean in good time.

“The Doldrums remain unknown, but at this time [of year] they are often not too bad and we can see that the trade winds are running parallel between North and South. Also the Southern Atlantic is not blocked, but after ten days, the forecasts are less reliable. We aim to be in time to catch a depression off Brazil. It would be nice to have a day in the bag at the entrance to the Indian Ocean. Francis completed this part of the course very quickly, and it will be difficult to do better,” stated the skipper of ‘Spindrift 2′.

“We are twelve aboard on this attempt compared to fourteen in 2015, but we also have a smaller mast. Below twenty knots of wind, we are less efficient in VMG, so we therefore need to have sustained conditions, which might make the transition phases a little more difficult. On paper, the trimaran has the potential of Joyon’s multihull and perhaps, under certain conditions with a weather similar to his, we will be able to break the record. However, all the stars must be aligned… ”

The team has already gathered in Brest and is making final preparations for the giant trimaran’s round the world attempt.