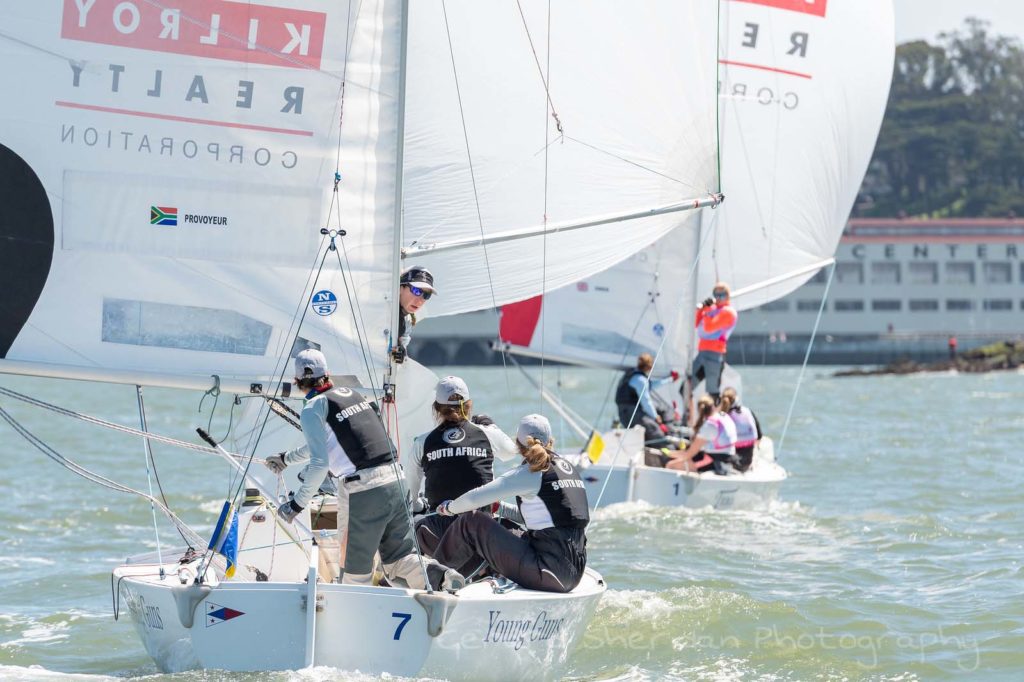 This event is no doubt teaching the two South African teams that Match Racing is a very tough part of the sport, especially if not participating in this format of racing on a regular basis.

Our two teams did not acquit themselves particularly well on day two, with Dominique Provoyeur coming away with a total of 3 wins after two days, and Dave Rae just two wins in two days.

Maxime Mesnil (FRA) dominated the Open Division during the second day of racing. In the Women’s Division Nicole Breault (USA) and Pauline Courtois (FRA) continued to rack up wins through the afternoon, sailing into a late afternoon face-off with seven wins each; the eighth was Breault’s. 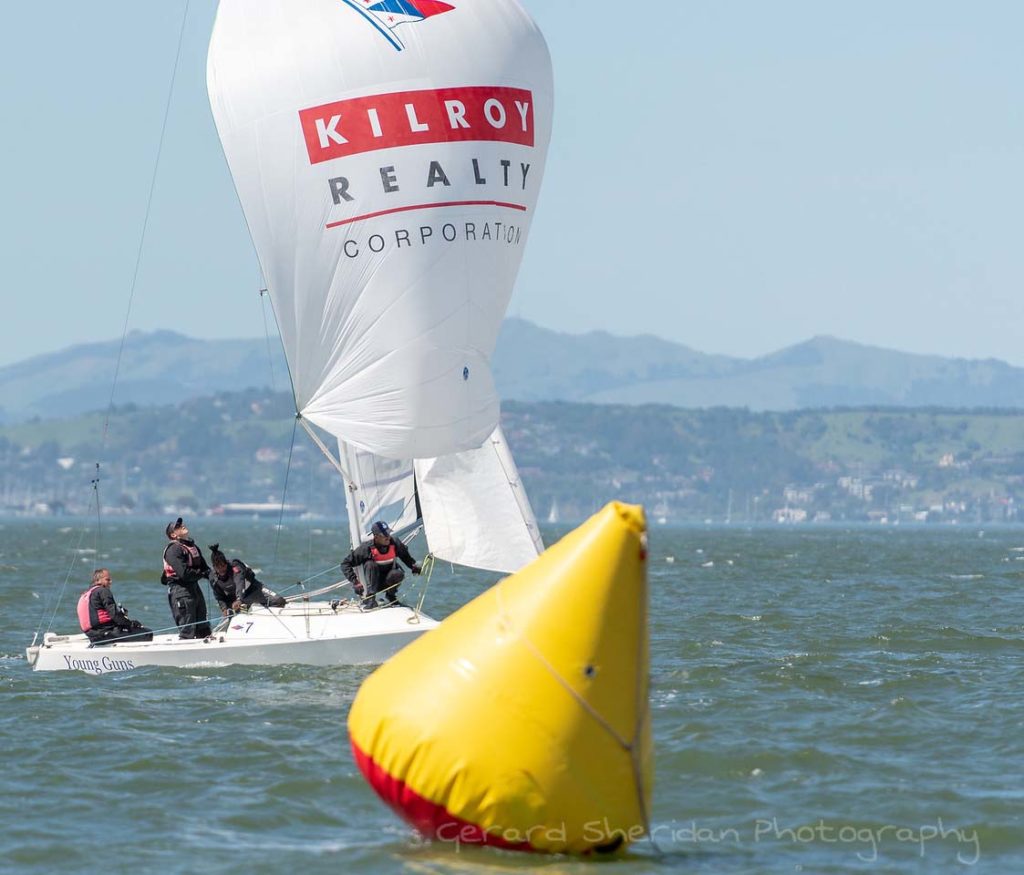 David Rae and his team.
pic by Gerard Sheridan 2019

Mesnil opened the day winning a tight race against Henrique Haddad (BRA), who’s standing at second place after completing Stage 1 of the round robin. In a morning plagued by a delayed start, fluky wind and unpredictable current on the Cityfront course at St. Francis Yacht Club, Mesnil went on to display smooth, economic boat handling skills as he battled with Nick Egnot-Johnson (NZ) and Ettore Botticini (ITA). Mesnil won against the Kiwis, but stalled out in a twist of luck against Botticini, who managed to hang onto the edge of a wind line and finish first, keeping him in the running as they head into day three of racing.

“We had a very good day and we sailed fast,” said Mesnil. “We lost that match, but we won the stage.”

Haddad, who hasn’t match raced since the 2013 Nations Cup and is sailing with a tactician, Leonardo Lombardi, who’s never match raced in his life, said the opportunity to sail on San Francisco Bay outweighed the uncertainty of how they might do. “We’re very pleased with our performance,” he said, adding, “It’s not done yet.” 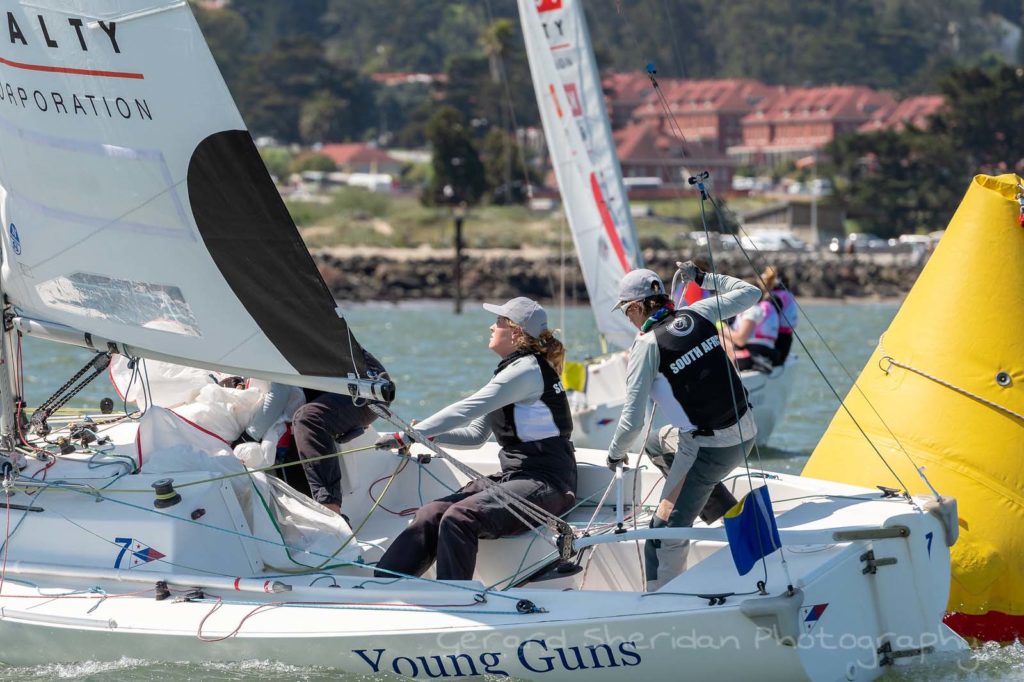 James Hodgson (AUS), now sitting at third place, opened the day with a loss to David Rae (RSA) followed by two wins, one against his Kiwi neighbours. “They beat us at our last event, the Hardy Cup in Sydney, so it was definitely good to get one up on them,” said Hodgson, who noted that the racing has been consistently close, “which you expect at an event like this. No race is easy. Usually we have a couple where we can keep it simple and win on speed. No one here is taking it easy.”

Breault went into the day knowing she’d be up against the top-ranked skippers at the competition and was hoping to lock in at least two wins. “We raced Anna Östling in the second match and I knew it was going to be huge. It was getting windy. We were able to luff her in the pre-start and timed it perfectly, holding it just long enough so she had to peel off to port and we were able to start ahead. On that upwind, we felt ready for the breeze. We were hiking really hard, trimming in sync and we felt really fast,” recounted Breault, who’s defending her Nations Cup title against women she emphasizes are just plain good. “The boat handling and pre-start action has been phenomenal.”Up against Courtois, Breault said, “Pauline had control of us in the beginning,” but, “we had an awesome set, shot downwind, no engagement and it turned into a drag race.”

Courtois went on to win her remaining matches and sits at second place. Östling, poised at third place and one win up on Allie Blecher (USA) and Juliana Senfft (BRA), said, “We need to stay on our toes.”