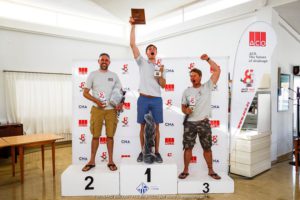 South African sailor Andrew Tarboton maintained his 3rd place to finish on the podium – a great result for a passionate yachtie.

And former RSA sailor Bruce keen was runner-up – so a great day for the Japies and South African sailing.

Two race were scheduled for the final day. There was a short delay prior to the first start. The first race was abandoned, and later race 13 started. By this time the waves had built to a steep chop. Keen was leading, but he hit a bad set of waves and capsized opening the door to the chasers, yet he recovered well to be 3rd.

In the final race Keen was doing all he could by leading the race, and the main he needed to beat for overall glory was in 12th – which at that moment gave Keen the overall lead.

As the race unfolded Keen held his lead, but the overall leader (Schwerdt) was pulling through the fleet and at the finish it was Keen who took the win with Schwerdt 3rd.

Whilst the Keen/Schwerdt battle had been raging competition for the 3rd podium slot was equally tough, but Tarboton (RSA) prevailed.

Sean Thijsse, sailing under the RSA flag, ended 43rd in this 63-boat fleet.