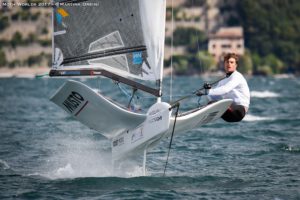 pic by by Martina Orsini 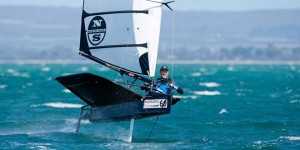 Garda’s breezes provide contrasting fortunes in qualification on day 3 due to the early morning ‘Peler’ from the North. After a lunchtime break to repair boats and refuel with more pasta, all fleets were sent back out for a much more sedate afternoon of racing, but again the Garda wind gods had other ideas. By 16h00 the weak afternoon breeze shut down for the day determining the all important Gold, Silver and Bronze fleets for the Final series.

Jof Heathcote, well known former RSA sailor, lies in 40th place out of 220 boats after 4 races, has made the Gold Fleet for the finals. This puts him a really rarified atmosphere amongst the very best sailors in the world who have Olympic titles, world championship titles, America’s Cup victories and much more to their names.

Paul Goodison took up from where he left off yesterday adding another two wins to keep a perfect scoreline. He was pushed hard but never really threatened by Olympic medallist, Simon Hiscocks, who finished with two excellent seconds. There were good performances for some of the master category sailors, Americas Cup team coach, Philippe Presti finished the tough first race and took 5th in the second. Another Americas Cup sailor, Francesco Bruni (ITA) got round the course finishing 5th in the first race.

“It was pretty fresh out there this morning, we were getting mid 20’s and bigger gusts. At the top of our course, it was quite flat but lumpy at the bottom” said Outteridge.

“I managed to win the first race but then in the second race I had a pitch pole in the middle of the bottom gate when I was in 2nd or 3rd, and snapped my mast, so that is two DNF’s in two days from two different things, so I am just running over the boat pretty closely now.”

Even the unflappable current king of sailing, Pete Burling suffered a number of stacks as he appeared to be suffering from control issues downwind.

With 4 qualification races completed per group, sailors can discard their worst score. So the points table at the end of qualifying shows Paul Goodison (GBR) with a string of bullets followed closely by Tom Slingsby (AUS), with three wins and a discarded 7. Rob Greenhalgh (GBR) sits in 3rd, Iain Jensen (AUS) 4th and Josh Mcknight (AUS) 5th. Pete Burling (NZL) sits in 15th and due to damage Nathan Outteridge (AUS) is down in 35th.