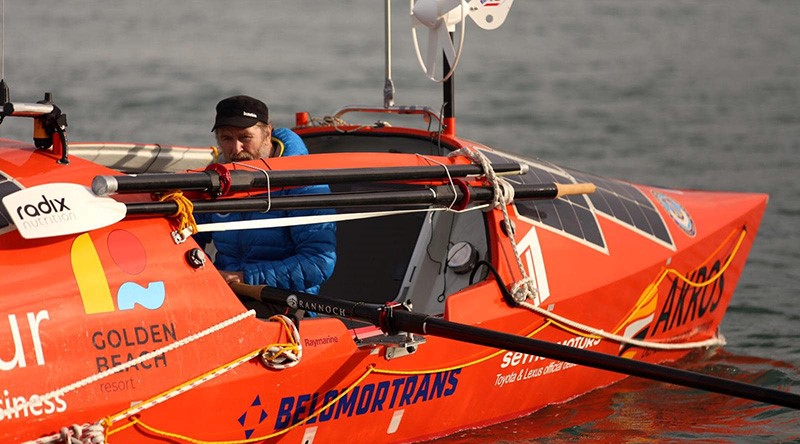 In this world there are people who like adventure and then there are adventurers; professional adventurers. Russian born Fedor Konyukhov is the latter. This man has more courage than just about anyone on the planet. Either that or he is downright stupid. Here is a short list of his accomplishments.

He is the first and only person in the world, so far, to have reached the five extreme Poles on earth. Those poles being the North Pole, the South Pole, the Pole of Inaccessibility in the Arctic Ocean. The latter pole marks a location ‘that is the most challenging to reach owing to its remoteness from geographical features which could provide access.’ The term is a geographic construct, not an actual physical place. He has climbed to the top of Mount Everest, a pole described as the Alpinists pole, and he has sailed around the world four times via Cape Horn, referred to as the yachtsman’s pole. Yesterday he added one more amazing accomplishment to his already packed resume. He completed a rowing trip from Port Chalmers on the south island of New Zealand across the Southern Ocean to Cape Horn at the tip of South America.

It took Konyukhov 154 days, 13 hours and 13 minutes to row from New Zealand to the island of Diego Ramirez which is technically not Cape Horn, but the place designated by his team that would mark a successful transit of the South Pacific. Later this year in December he will set off again from Diego Ramirez (presumably) heading for Cape Leeuwin on Australia’s west coast and then in 2020 he will row from Australia back to New Zealand to become the first person ever to have rowed all the way around the world. Not to take anything away from him this is technically a circumnavigation of the Southern Hemisphere, not the world. For a sailors voyage to be counted as a proper circumnavigation he/she has to cross the equator and enter the Northern Hemisphere, if only for a short amount of time.

His sailing accomplishments are also quite remarkable. In 1998/99 he sailed in the Around Alone, a solo circumnavigation that started from Charleston, South Carolina with stops in South Africa, New Zealand and Uruguay. That was apparently his third solo circumnavigation, but I can’t find details of the first two. In 2000/01 he participated in the Vendée Globe, but retired in New Zealand with damage to his yacht. In 2004/05 he sailed single-handed around the world on an 85 foot maxi-yacht named ‘Alye Parusa’. That voyage started from Falmouth in England and he stopped in Cape Town as well as Hobart in Tasmania.

In addition to his sailing adventures Fedor has written 17 books and has also done the Iditarod dog sled race from Anchorage to Nome in Alaska, plus he is one of a small number of people that have climbed the highest peaks on all seven continents. In addition to climbing Mount Everest in Nepal, he climbed Mount McKinley in Alaska; Kilimanjaro in Tanzania, Africa; Vinson Massif in Antarctica; Carstensz Pyramid in Indonesia; Mount Kosciuszko in Australia and Aconcagua in Argentina.

What’s discussed in this blog is just a tiny piece of his overall accomplishments but what I think might be one of his biggest accomplishments is that he has a family. When did he have time for that? His son Oscar manages his expeditions.

You can find a list of all of his amazing adventures HERE.

Hat’s off Fedor. You make me feel like a couch potato.