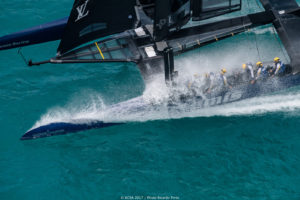 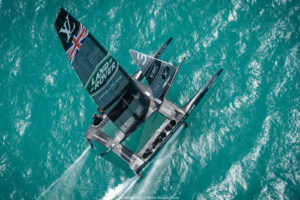 The racing last night (Thursday) was tense as it was crunch time for Land Rover Bar and Artemis Racing as unless they bounced back, they were on their way home and out of the competition.

That’s actually where Ben Ainslie and his team are headed as despite putting in their best race of the series so far, and beating the Kiwis convincingly, they were unable to sustain that late charge and succumbed in the final race, which saw Emirates Team New Zealand qualify for the Challenger Finals.

In the other pairing between Artemis and Softbank Team Japan, things were different as Dean Barker (Softbank) simply could not match the superiority of the Artemis boat and crew on the day as Artemis won all 3 races.

These were titanic duels, fought hard and relentlessly, and I must say intelligently by Ian Percy, Artemis’ tactician. These guys were on top of their game and not in the mood to be eliminated. As things stand Artemis has 4 wins against Softbanks 3 – with the first to 5 winning the spot to challenge Emirates Team New Zealand to see who faces off against Oracle Team USA.

Tonight’s racing (Friday) is going to be fascinating as Artemis has the reputation of being the fastest boat on the water, while Softbank has Dean Barker as their skipper with many years experience in this event and multihulls in general.

It’s a must watch – so following it live on the APP.

Here’s how the racing went:
Sweden vs Japan
“It would’ve been good to get another point on the day, but we take a lot of heart, the boat was going well and we kept coming back at them”, said Skipper and CEO Dean Barker of Softbank. 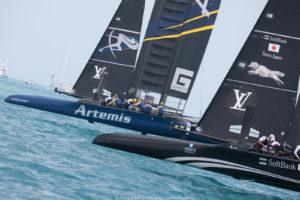 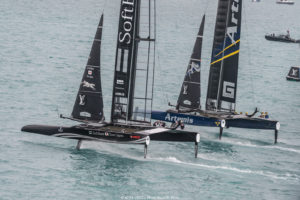 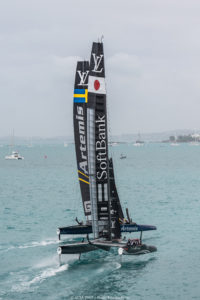 “They were sailing really strong races so it was hard to find space to pass. The third one we had a good race and the top mark ended up costing us the win.”

The racing was never closer than it was today with Artemis Racing and SoftBank Team Japan in virtual lockstep around the course in all three contests.

However, even with the first two races ultimately going the way of the Swedes, it was the third and final race of the day that raised many eyebrows.

SoftBank Team Japan’s speed kept them in the game right from the start as the Japanese team defended the leeward position on the first reach to lead at Mark 1 and extend through the bottom gate.

Looking to break free from the strong Japanese position Artemis Racing was able to force a split then on the first upwind leg from where both teams remained at odds through the whole race.

Despite being quicker upwind and ultimately crossing in front of the Swedes several times on the final beat, Artemis hooked into a shift on the lefthand side of the course to set up a port starboard at the top mark.

With the Japanese on starboard tack speeding in towards the left mark, Artemis gained right of way by entering protection zone first and threw in an aggressive tack around the gate.

Although SoftBank Team Japan gave room to the Swedes, the umpires ultimately decided it was not enough space and penalized the Japanese boat leading to a costly time deficit that handed the race to Artemis Racing.

“There’s a lot of situations around the course which come down to instinctive decisions”, said Skipper and CEO Dean Barker.

“We felt like there was enough room there and were surprised we got the penalty, but obviously the umpires felt strongly that was the way it should go. If that’s the case then you get on with it.”

“It was an awesome day for us and I’m incredibly proud of everybody involved in our team,” said Artemis Racing helmsman Nathan Outteridge.

“We had an incredibly tough day on Tuesday and so as a team we looked back at what we had to do better. I think everyone saw not only an improved boat, but a much needed improved performance from us as sailors.

“We were not particularly nervous heading into today. We know it could have been our potential exit today but we were all quietly confident.

“We could have lost confidence in the boat after Tuesday but everyone dug in deep and I’m just proud of what we achieved today.

“We went back to basics and it just showed how easy it can be to win races again. The aim is to do the same tomorrow and take another step towards winning the America’s Cup.”