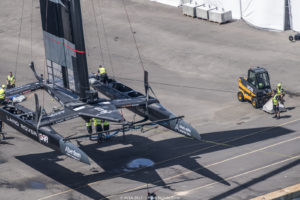 Racing was something of a let down as the semis finals began in earnest as for me racing was not as close as it could have been – except of course for the final race of the day, but by then only the diehards would have been left watching.

Poor old Ben! Gear damage very early in the race put paid to his chances of surviving this series and challenging for the cup. The Kiwis must have been very chuffed in choosing the Brits to sail against as they considered them to be the weakest of the four teams.

However, one has to feel for Ben Ainslie and his team as gear failure is not the way anyone want to go out of an event – and certainly not one as important as this.

The Sweden vs Japan duel ended the day drawn on 1 win each, although the Softbank guys gave Artemis a good ‘klap’ in the first race. It was looking like Softbank may well end with two wins, but a late charge from Artemis coupled with some good boat handling and tactics saw them come from behind in the closing stages – which keeps their hopes alive.

In this series, it’s the first boat to 5 wins which goes through.

Here are the race reports.

Emirates Team NZ vs Land Rover BAR
Emirates Team New Zealand have gone two up in their semi-final against Ben Ainslie Racing, but not in the way they hoped. 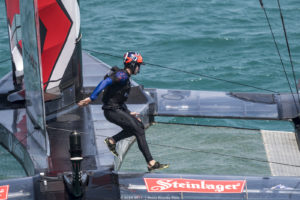 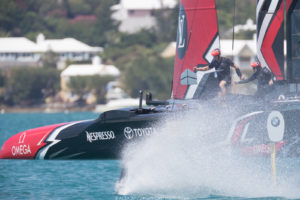 Gear damage that led to the retirement of the British boat in the first race could not be repaired in time for the second encounter, handing the Kiwis both points.

The battle between Sir Ben Ainslie and Peter Burling had been billed as a potential classic with the British boat expected to drive the action in the start box. Ainslie had warned he’d be the aggressor and he hounded Burling in the duel looking for the hook.

But the young Kiwi skipper bobbed and weaved his way to the line to fend off the British attack, keeping his distance to windward.

Ainslie started slightly ahead of Emirates Team New Zealand, but Burling simply picked up the pace to overhaul BAR at more than 40 knots and lead by four seconds at mark one.

“We were really pleased with the way we got away in that first race,” said Emirates Team New Zealand skipper Glenn Ashby. “ We had a really good pre-start tussle with those guys and we were pushing the boats to the limit of what you can potentially do and we got the best of them I think.”
Picking up two more seconds at the second mark the Kiwis were in control. But it proved to be academic as gear failure hit the British boat and forced them to retire.

Damage to controls within the wing were unable to be repaired in time for race two forcing BAR to withdraw from the second race handing the Kiwis both points for the day.

The Kiwis had only to start the second race to pocket the point and they’re happy to resume racing against the British tomorrow two up in the first-to-five series.

Tonights race should be a corker as Ben Anslie and his team aboard Land Rover BAR will need to win to stay alive in the competition. It’s going to be one to watch closely – of that there is no doubt.

Ben Ainslie on Their Damage
“It’s a really tough situation for the team. Rounding the first leeward gate, we had a breakage in our wing control system, which meant we had to retire from the race. It is an extremely bitter pill for the whole team to swallow given that this is the first two races of the playoffs against ETNZ, but it’s something we can deal with and we have the team to turn it around and come back fighting tomorrow.”

“It went from our normal setting to having max power on the wing camber with no way of controlling it. We are absolutely gutted.”

“We will see the damage when we take the wing apart. It’s just one of those things in sport and tomorrow is another day, fantastic forecast and we are going to absolutely sock it to them.”

Artemis vs Softbank Team Japan
The first race between these two proved less dramatic than the Brits vs ETNZ, but no less enthralling as the Japanese team sealed their important first point against the Swedes. 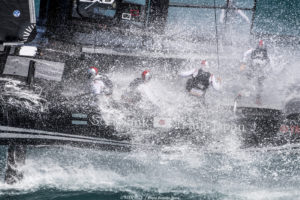 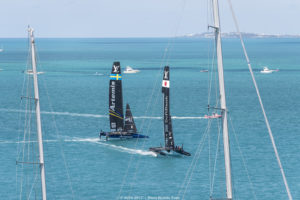 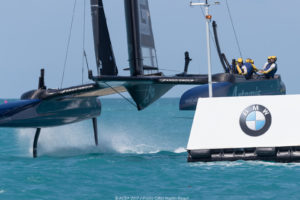 After an even start, it was Nathan Outteridge’s Artemis Racing who stole the early lead, reaching the first mark narrowly ahead of the Japanese team.

However, the tides turned on leg three of seven, as a perfectly executed manoeuvre from Dean Barker saw him pass Nathan Outteridge as SoftBank Team Japan snatched the lead heading into gate three.

It was an advantage they would not relinquish for the remainder of the race, maintaining a steady lead over Artemis Racing with Dean Barker holding his nerve to bring his SoftBank Team Japan over the finish line 23 seconds ahead of their rivals.

Having lost the first encounter, Nathan Outteridge came back fighting to clinch a crucial win and level the scores at 1-1.

In contrast to the first encounter, it was Dean Barker who won the pre-start duel to claim the early advantage, with Nathan Outteridge trying and failing with a penalty call.

However, Barker was not to have it his own way as the race progressed into a topsy-turvy encounter with multiple lead changes, particularly during leg five when Artemis Racing came out of the gate five turn with a slender lead.

Under pressure, Dean Barker made a costly and ultimately crucial mistake, tacking poorly to all but end SoftBank Team Japan’s challenge and hand the advantage to Artemis Racing.

It was a gift that Outteridge seized upon, opening up a clear gap on leg six, rounding the final mark before crossing the finish line safely ahead of his rival to level the scores and leave the tie finely poised heading into tomorrow’s scheduled races.

“We had a really good first race and we were delighted with our sailing to take that first victory,” said SoftBank Team Japan helmsman Dean Barker.

“In the second race, we had a good start and were leading comfortably but a bad gybe from ourselves allowed them (Artemis Racing) to take control.

“It is never ideal to have a poor manoeuvre like that but we go away and refocus on what we need to do going forward.”

In reply, Artemis Racing’s helmsman Nathan Outteridge was satisfied with his team’s performance overall in what proved a close battle against Dean Barker.

“I’m very happy overall to get a point on the board,” said Outteridge.

“We had two tough battles but we sailed really well and I thought the pace of the boat was great throughout the day.

“I think we were unfortunate to lose the first race because we let them through, but in the second race we kept the hammer down and took a nice win.

“We backed ourselves and got an important win and that is really pleasing to take away.”