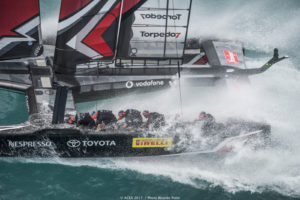 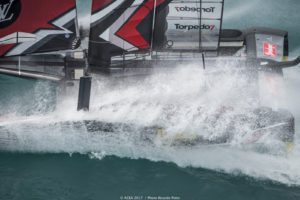 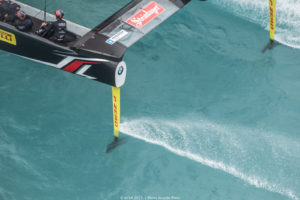 Is it sailing or is it flying. That’s a debate with long legs and which will be debated long into the night for many years to come.

To me it’s not important right now as the it’s not the sheer speed of these foiling cats that impresses me, but rather the ability of the crew to manipulate them to greater heights. It’s the technical ability of the crew on how to handle the boats in every situation that make these duels so fascinating.

The fact that Oracle Team New Zealand was able ‘to fly’ without her hulls touching the water for 100% of their race against Groupama, is testament to the absolute skill of her crew – and no small measure to her designers, engineers and many more.

This is the first perfect score of the series so far, something she also nearly achieved in her race against Japan earlier in the day when the judges scored her 99.6% – much to the annoyance of Kiwi fans.

The day was not just about flying as it also saw Groupama exit the series as just the top 4 challengers go through to the playoffs.

For Emirates Team New Zealand their two wins yesterday saw them leapfrog the USA and head the standings – with todays race between them being the absolute decider in this series. That’s going to be a corker – and a race not to be missed. It’s the first race on the schedule tonight.

The Swedes on Artemis also won 2 races, something which has been overdue as they are fast, very fast. But crew work has let them down. 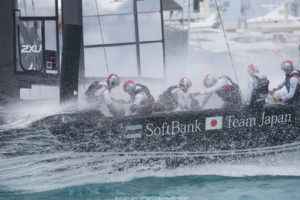 The Kiwis, who came into the day sitting second in the standings, just a point behind Oracle Team USA, started the race in the best possible fashion, timing their pre-start perfectly to out-manoeuvre the Japanese team and race clear of their rivals from the start line.

SoftBank Team Japan’s pursuit of the Kiwis was a dealt a blow on leg 3/7 as they suffered a big nosedive while attempting a tack, allowing Emirates Team New Zealand to extend their lead to 23 seconds by the third gate.

It was a lead Peter Burling and his team would not relinquish, sailing magnificently and staying up on their foils for an incredible 99.6% of the whole race, finally easing over the finish line 51 seconds ahead of their Japanese rivals.

USA vs Sweden
The Defenders of the ‘Auld Mug’, Oracle Team USA, saw their opponents, Artemis Racing, claim the spoils with a pivotal victory.

A perfect pre-start enhanced their chances of victory as they raced clear of Oracle Team USA heading towards the first mark. 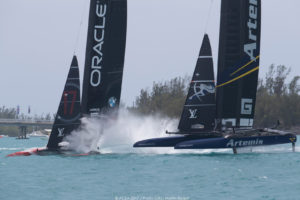 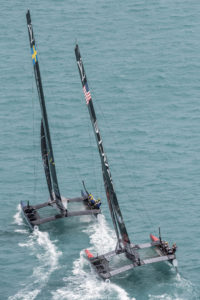 One of Artemis Racing’s two victories in the Louis Vuitton America’s Cup Qualifiers prior to the race had come against Oracle Team USA and building on their early lead from the start line, they ultimately repeated that feat, never giving up the lead as Oracle Team USA had no response in their pursuit.

“Before today, we had some serious talks amongst ourselves about everything because we had gone from performing really well in practice races to having to question being able to qualify (for the Louis Vuitton America’s Cup Challenger Playoffs).

“We took a step back to see what needed improving and I felt we saw those improvements today.”

France vs NZ
Groupama Team France was under pressure from the outset in their battle against the high-flying Emirates Team New Zealand as they needed to beat the Kiwis to have a chance of not being eliminated. 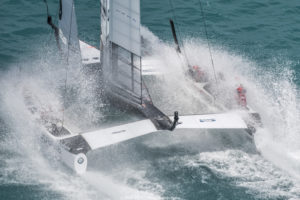 Ultimately, they failed to muster a strong challenge against the ever-impressive Emirates Team New Zealand, who led from start to finish in what proved a faultless display, finally crossing the line four minutes and six seconds ahead of the French team.

“The boys all floated the idea of being able to foil for an entire race, It is always the goal and I’m delighted we managed to achieve that,” said Emirates Team New Zealand helmsman Peter Burling.

“We are all really happy to be top of the standings. Everyone in the team has worked really hard and we have executed our races really well.

Sweden vs Japan
From the outset, victory never seemed in doubt as the Swedish Team got off the start line ahead of SoftBank Team Japan and led from there on.

SoftBank Team Japan refused to give up the battle, remaining under 20 seconds behind Artemis Racing throughout the entirety of the race. However, there was to be no late drama as the Swedish team maintained their advantage to cross the line 18 seconds ahead of their opposition.

“We were close in both races today but we just could not get a victory.”

The BIG Showdown – TONIGHT
That’s the race between Emirates Team New Zealand and Oracle Team USA which is tonight. 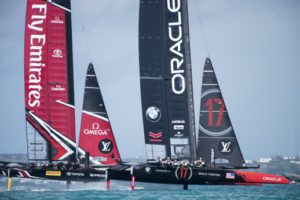 “I’m really excited for the race against Oracle Team USA tomorrow. It is a big race for us and it will be great to test ourselves under the pressure” said Peter Burling, helmsman of the Kiwi boat.

Meanwhile, Oracle Team USA’s Jimmy Spithill is relishing the monumental battle that lies ahead against their Kiwi rivals.

“It is a big one tomorrow and I’m looking forward to it,” said Spithill.

“Being in a position where if we beat the Kiwis we get the bonus point is nice.

“We are all really pumped up for that one, it will be one hell of a race.”