It’s amazing how just a few knots of wind can turn these giant America’s Cup cats from hot raging speed machines into something more like a yawn! 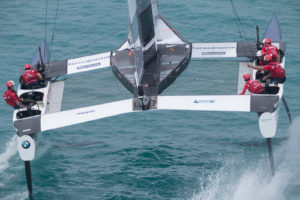 Last nights racing had little going for it and really lacked any action. But there were some ‘moments’ that one could keep for posterity – one of those bing Sir Ban asking ‘what happened’ after a particularly poor tack in which the boat buried itself and stuck to the water like glue. The other was him retiring from the race as he was so far behind.

Land Rover BAR looks anything like a race winning boat. It looks a few knots slower than the others, and is obviously a handful in the manoeuvres as she has a habit of dipping the hulls in the water and then battling to get up to speed quickly.

That said, after a torrid race against the Kiwis, Ainslie and his crew brought their ‘A Game’ to the party and beat the French through superior tactics rather than pure boatspeed. Tat was a crucial result for the Brits as they desperately needed a win. Not that the French do not either as they have only won two races so far and the Brits 3.

Here’s a summary of the racing from last night. 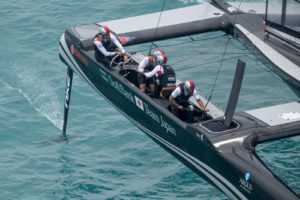 In light winds, the Japanese team made the better start, increasing their lead when their French opponents suffered a slight nosedive early on in the run up to mark 1.

Helmed by Dean Barker, SoftBank Team Japan managed to stay up on their foils in the light winds for longer periods than the French and maintained a healthy lead throughout the first race of the afternoon.

With the light winds in mind, America’s Cup Race Management (ACRM) took the decision to shorten the racecourse which meant that a victory for the Japanese team, rarely looking in doubt, was confirmed sooner than perhaps expected, as they crossed the revised finish line over five minutes ahead of Groupama Team France.

UK vs New Zealand
Land Rover BAR’s first outing in race 5 proved a forgettable one for Sir Ben Ainslie’s team, as they were soundly beaten by the impressive Emirates Team New Zealand. 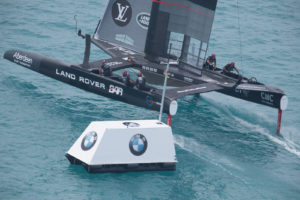 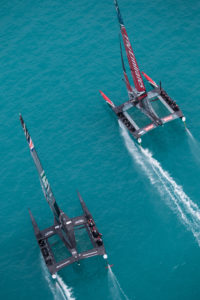 Having taken a welcome win over Artemis Racing on Tuesday, the British team were unable to build on the momentum of what had been only their second victory in the Louis Vuitton America’s Cup Qualifiers. They were overtaken by their rivals in the lead to mark 1 and, from that point, were unable to close the gap to the Kiwis.

Things went from bad to worse for the Brits and, while jibing on leg two, they came off of their foils, touching down into the water and from that point there was to be no comeback.

In contrast, Emirates Team New Zealand were problem-free, sailing off into the distance with their lead reaching a massive six minutes and 25 seconds on the fourth leg, a full lap ahead of their British opponents.

With Land Rover BAR still out on the racecourse, Emirates Team New Zealand crossed the finish line, leaving Sir Ben Ainslie to concede defeat over the radio to the umpires, confirming that his team were retiring from the race. In the post-race press conference, Sir Ben said that, to the best of his knowledge, that was the very first time he had retired from a race of his own volition.

USA vs Japan
ORACLE TEAM USA once again showed their pedigree in race 6, as they denied SoftBank Team Japan a second win on the day, beating the Japanese team by 32 seconds. 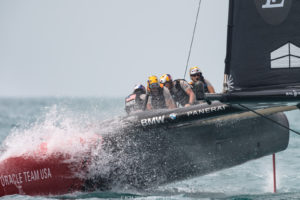 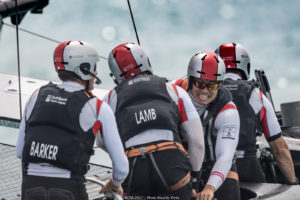 The Defenders of the ‘Auld Mug’ had to do it the hard way however, after being handed a penalty in the pre-start sequence for not entering the entry box in time, allowing their opponents to take a healthy lead which they maintained for the first four gates.

However, despite the initial setback, ORACLE TEAM USA remained in pursuit of SoftBank Team Japan, cutting the deficit on every passing leg.

The pressure finally told at gate 5 as the American team not only cut the lead completely but also passed their rivals, building to a 35 second lead in the closing stages.

It was an advantage they did not relinquish, crossing the finish line 32 seconds ahead of SoftBank Team Japan as they maintained their position at the top of the standings, moving on to seven points.

Despite already having their passage through to the Louis Vuitton America’s Cup Challenger Playoffs Semi-Finals assured as the Defenders of the ‘Auld Mug’, ORACLE TEAM USA helmsman Jimmy Spithill reiterated his desire to win these qualifying stages with a possible valuable point on offer to take into the 35th America’s Cup Match presented by Louis Vuitton. 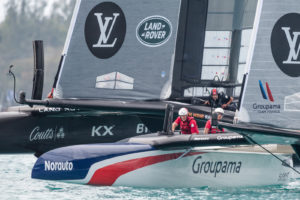 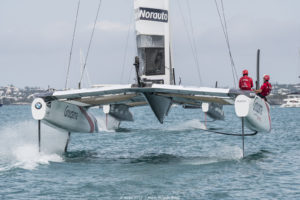 However, with light winds remaining over the racecourse, victory never looked assured for Land Rover BAR and the lead changed hands multiple times throughout the race.

However, there was real drama as the teams headed for the finish line neck and neck. In the end it was the Brits who ultimately prevailed, crossing the finish-line narrowly ahead of their rivals to claim a victory which takes them on to five points, ensuring their progression into the Louis Vuitton America’s Cup Challenger Playoffs Semi-Finals.

“It has been a tough day all round and we struggled in the light-wind setup,” said Land Rover BAR helmsman Sir Ben Ainslie.

“We suffered a technical issue with the systems controlling our daggerboard against New Zealand, but the guys did brilliantly to fix the issue ahead of the second race with Groupama Team France.

“We managed to hang in against Franck (Cammas) in that race and won by the smallest of margins.

“It is a relief to have got through to the next stage because that is the first goal for all the teams competing here.

“I’m very happy to be through but I’m also very mindful that there is a lot for us to improve on.

“There is still a long way for us to go and so unfortunately there will be no party for us tonight.”