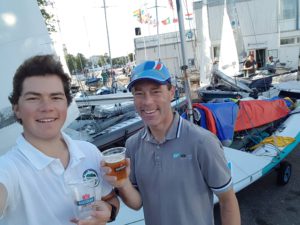 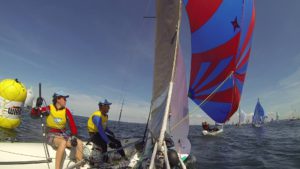 Warwick and Jonathan Ham are a lone South African team competing in the 505 European Championships against competitors from 11 different countries.

Warwick Ham has reported as follows on Thursday’s race:
Great sailing today at the 505 European Championships in Warnemuende. The opening ceremony was a colourful affair, with representatives from 11 sailing countries. The weather was sunny and warm, and we sailed 2 races with over 90 boats on the start line.

The wind was quite light, about 6-9 knots from the North West. The gate start line was about 6 minutes long and we started after about 2 minutes. Big fleet sailing is a challenge, especially in light winds where keeping in clear wind is the main objective. We were just not trapezing upwind so chose to go low on the first downwind, but on the second decided that reaching was more favourable to make use of the slight waves.

The race was won by the GBR team of Nathan Batchelor and Sam Pascoe, with the Danes and current Kiel Week champions Jorgen and Jacob Bojsen Moller in second.

We finished the first race a credible 38th out of 93. The second race started after a short break and we proved that even after a messed up start due to a difficulty getting onto the trapeze, we were able to pull our way back up the fleet and finish in 37th position.

The second race was won by the Bojsen Moller brothers with Benedikt Northoff and Holger Jess in 2nd and our friends Nicola Birkner and Angela Stenger in 4th putting them in third place overall after two races.

After the racing we downed our “Rostock” before getting changed for the opening Grill Party in the railway shed behind the club. The meal was fantastic with 4 different meat types and many salads and of course a selection of puddings, and of course plenty chatting to new and old friends.

We wandered home through the beautiful old town of Warnemuende, and watched the sunset before turning in for the night.