Race 4 winners, Hout Bay Yacht Club, with runners up of the day, Royal Cape Yacht Club, trying their best to overtake them – but to no avail.
From back to front: Andrea Giovannini, Raaid Pentolfe, Sieraj Jacobs, Marco Tobin, Theo Yon.
pic by Ashleigh de Villiers 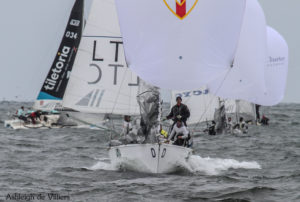 Hout Bay Yacht Club on LTC Phoenix led the way on every leg of the race.
pic by Ashleigh de Villiers

Hout Bay Yacht Club showed some excellent sailing skills today, and a desire to win at least one race in this Lipton Cup series after retiring from race 3 and destroying any chance of an overall victory. They were rewarded with a win having led from the start.

Day 4 was sailed on a windward/leeward course as the compulsory 3 ‘Lipton Courses’ have all been completed.

At the start of the race, a collision between defending champions Royal Cape Yacht Club (RCYC) and Hout Bay Yacht Club (HBYC) resulted in two turn penalty (720 degree circle) for RCYC who were last across the start line.

Being forced to the side they did not really want to go the RCYC team worked hard at their boat speed and tactics and were soon back into the thick of things, although it was going to be hard for them to catch HBYC who led from start to finish.

During the last two legs of the race, Royal Cape caught up well to secure second place, with Southern Charter UCT in third.