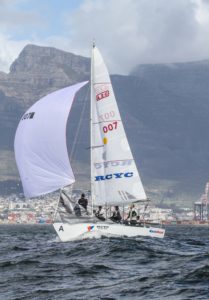 The defending champions and winners of all 3 races so far.
pic by Ashleigh de Villiers 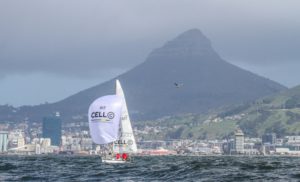 Day 3 was a day of contrasting fortunes as the Hout Bay Yacht Club (HBYC) team led for 7 of 8 legs, then were becalmed and ultimately retired from the race.

This gave the chasing Royal Cape Yacht Club (RCYC) team their third win in a row,.

The Cape winter showed no mercy as high seas, moderate winds and rain showers tested their endurance and skill shortly after the start. The Hout Bay Yacht Club team, skippered by Theo Yon, took an early lead and continued to extend that lead into what seemed like a certain victory. However, after 7 of the 8 legs had been sailed, tragedy struck not long after they rounded the very last mark of the windward/leeward course as the wind suddenly died down. HBYC had chosen to go right, as did Langebaan YC (LYC), and both were stuck without a breath of wind, and hoping for a breeze to carry them to the finish line in first and second places. The team from LYC gamely persevered and were rewarded with 5th place, but the HBYC team called it a day and retired from the race.

RCYC, the overall leaders after two races chose the left side of the course where they had enough breeze to take them to the finish line and a third successive ‘bullet’.