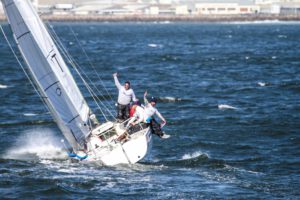 Exhiliration after winning two days in a row.
pic by Ashleigh de Villiers 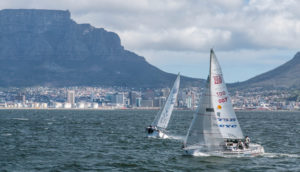 HBYC managed to win the day’s race by overtaking their RCYC rivals in the last 100m of the race.
pic by Ashleigh de Villiers

Sailing a triangular course, the RCYC team led from the start and seemed certain of a fourth ‘bullet’, but the determined HBYC team pulled one out of the bag and with superior boat speed overhauled their opponents less than 100 metres from the finish – and taking an unexpected win.

After day 5 of 6 race days, defending champions Royal Cape Yacht Club are still the overall leaders of the regatta. They are co-sponsored by RaceAhead and skippered by Roger Hudson.

Tomorrow’s race will be the last of this year’s Lipton Challenge Cup – and all eyes will be on these three teams to see who will take the final victory. While it may seem like the event is wrapped up and won by the RCYC team, with no discard of their worst position available in terms of Lipton Cup Rules, the RCYC team will need to keep their noses clean and be on the lookout for anything untoward that could prevent them from winning.

Regrettably the race tracker blows hot and cold preventing one from following the racing in real time. A pity as this modern technology really brings the racing into the lives of many, yet is spoilt with boats disappearing from the screen at crucial times.