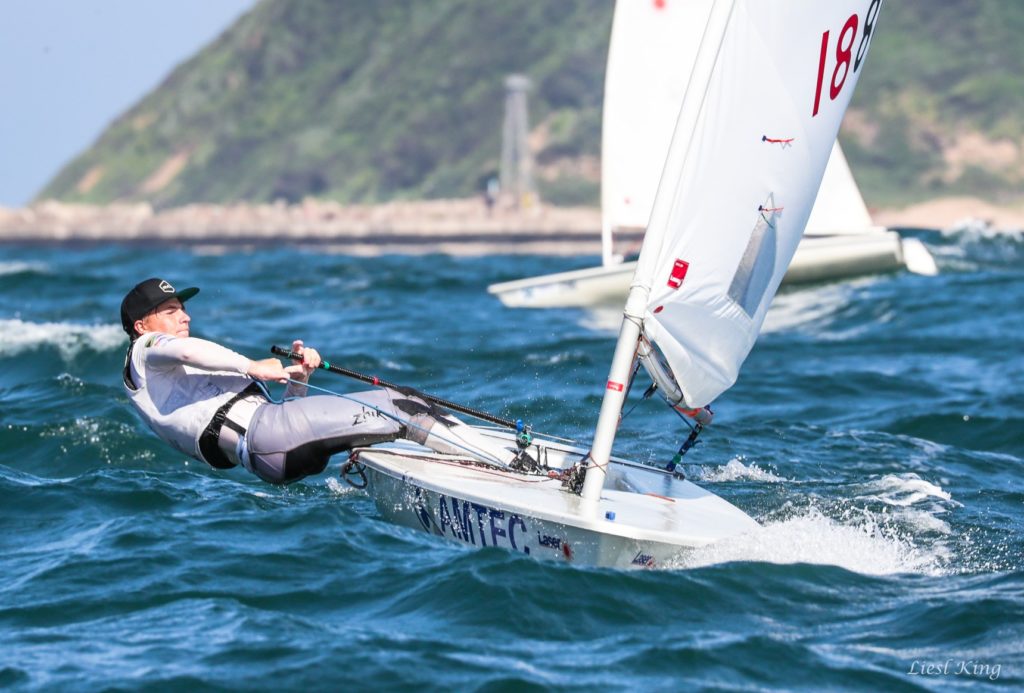 I always enjoy receiving mail from my old mate Roy Dunster as it is always thought-provoking and often controversial. For the dyed-in-the-wool types his out-of-the-box thinking is sometimes simply too much for those with a narrow view.

His latest is about the Laser dinghy under the title “Laser Realities”.

It’s important to know up front that Roy is a pretty competitive Laser sailor, despite his advancing years, and recently bought one of the handful of brand new boats imported into RSA. So he’s a committed Laser sailor with an investment in the Class. Plus he chose the class due to their fleet numbers and close racing locally.

There is a lot of passion amongst Laser sailors, as there is amongst sailors worldwide when it comes to Olympic classes – and their choice. Currently the Laser looks to be under threat as an Olympic boat with many delighted with this possibility, and others fighting every inch of the way to keep the boat in the Olympics.

There is a petition doing the rounds at the moment aimed directly at World Sailing asking it to save our sport! The petition appears to have been initiated by some heavy hitters at the top of the sport in their respective Olympic classes opposed to the changes World Sailing is considering.

Not a bad thing I suppose, as open debate is likely to brings out all the good and the bad which permits a more informed decision.

Once again Dunster puts this in perspective with specific reference to the Laser singlehanded dinghy. Here’s his view:

It might be useful if I start by saying that I bought a brand new Laser 12 months ago – presumably that means I have a vested interest that it remains in the Olympics.

Surprisingly enough, my enthusiasm for new boats actually stems from a conversation I had with the late Bob Fraser (a previous Commodore and stalwart of PYC) about 30 years ago. I had been adamant that the best approach was to nurture existing classes – he convinced me that growth actually happens when you introduce new, modern boats which stimulate excitement. Looking around, you can see how right he was – in Durban, lots of new fleets were launched in the 1960s and 1970s (and there was a boom in local sailing) but, since then, no new types of boats have been introduced (I tried with the Rebel) and the old classes have simply died.

On the other hand, the UK probably has the most active market in new classes and sailing there is in great shape – not just with the new boats, but in fact, also with the more traditional ones. Obviously there are other factors at play, but the strength of sailing in the UK also outshines the USA (a much larger potential market), where they seem to have a general predisposition to relics.

Paul Elvstrom referred to the Laser as “antique”, and that was in 1992! See just above “Fun boards” in the 2nd column:  Paul-Elvstrom-on-future-olympic-sailing_IYRU-news-may-1992

From the sound of things, the Olympics 2024 selection group have made the right recommendation, even though it was initially a surprise to me (I thought the Melges 14 would walk it):
• The Devoti seems to be unnecessarily complex and quite a flawed design (ie it nosedives and the controls are in the wrong place)
• The Melges 14 has a great cockpit….for hiking. However, it doesn’t lend itself too well to dead downwind sailing when you need to crouch inside the cockpit without sufficient support
• The Aero appears to be a “modern Laser”, but with all the benefits of a 45 year younger design (ie much lighter hull, better ergonomics, easier to transport, fast) but still with sensible cockpit for the realities of sailing dead downwind
• The Laser has well-publicised failures, both with the international class administration and it not being as much of a one design as they would have you believe. If it does go ahead with a new rig, one would expect that the cost will effectively split the class in any case. Would you spend whatever the new rig costs (I’d guess R30K – R40k+ in RSA: i.e., 40% of the cost of each new boat we brought in last year)) or would you simply buy an Aero?

There is no reason why losing Olympic status should be the death knell of any class. I’d expect the Laser (like the Finn) to have a thriving club, national and Masters scene which, with proper class management, could enable it to grow stronger as non-professional sailors are no longer cannon fodder for full-time Olympians. Old designs also seem like old cars which are raced at historic events (eg Goodwood, historic Le Mans, etc). They are well maintained, updated with new kit, raced by competitive people but they’re no longer really suited for pinnacle competition.

It’s quite rational for the Laser class to try and protect its Olympic status. However, from a South African perspective:
• Despite the fact that the Laser has been sailed here since the 1970s, we have only had 2 Olympians in the last +-20 years (Gareth and Stefano) and 3 in total since 1992 (Dave Hibberd)
At the recent Laser Nationals:
o The 28 boat Standard rig had only 3 Open sailors and 1 Junior – the rest were various categories of Masters
1 of those Open sailors was from Uganda
o The 19 boat Radial class had 6 female sailors, only 1 of which was Open, and 12 Youth sailors
Of the Youth sailors
• 4 were from Mozambique
• Of the South Africans, only 2 were female
• Obviously dinghy sailing, as a whole, is struggling in RSA, but the Laser isn’t exactly attracting large numbers of Olympic-age sailors
• We need to acknowledge the difference between what makes us feel good, as Laser sailors (i.e. it’s “cool” to be an “Olympic” class), versus what is in the interest of future South Africans sailing at the Olympics.

As pointed out in my previous articles re-Olympic class selection, the cost of the boat is a relatively small component of overall campaign costs. If you do a quick comparison:
o A new Laser is about UKP6,000
o A good coach will cost +Euro500 per day – you need a full-time coach if you’re going to get anywhere
o When there are variations in the manufacturing process (eg Laser / 470 / etc), you need to buy lots of masts (and probably hulls) before you get the right one
o Lasers which are subjected to the rigours of Olympic-level sailors have a track record of going soft and the sails not lasting too long (I’ve heard you will need about 20 / season)
o Note that many of these points are less of an issue with a new, modern boat designed around up-to-date materials and manufacturing processes. For example:
o sail design is likely to be more robust
o You can control the process for making carbon spars far more tightly than aluminium
o In the case of the Aero, the boat is very light and actually designed to be easy to move around – that could help to manage some of the campaign costs

As for the petition which is (still) going on about “saving sailing”, one needs to distinguish between what is good for the sport versus (a lack of) action that will enable people who are resistant to change to keep feeling comfortable and which is in the commercial interests of incumbent manufacturers.