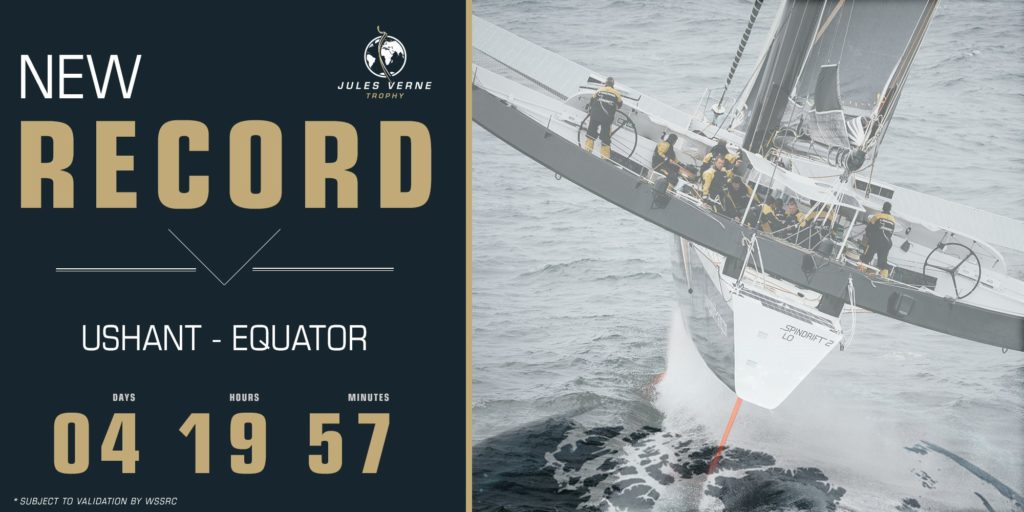 At 07h45 UTC this morning, ‘Spindrift 2′ broke her own record by just over an hour, by crossing the Equator in 4 days 19 hours 57 minutes. This also gave the black and gold team an advantage of more than 23 hours (180 miles) over the current holders of the Trophy Jules Verne, ‘IDEC Sport’. This is the first challenge in the team’s quest to beat the round the world record. The time for the passage from Ushant to the Equator still has to be officially ratified by the WSSRC (the international organisation that oversees records), but Yann Guichard and his crew can be pleased with this first section of the course, and bettering their own record time, set in 2015 (4d 21h 45′), by 1 hour and 48 minutes.

‘Spindrift 2′ crossed the line in front of the Créac’h lighthouse on Wednesday 16 January and quickly took advantage of the favourable conditions. The crew had to gybe the 40m trimaran about a dozen times to ensure that they stayed in the trade winds as they passed through the Canary Islands and the island of Hierro. 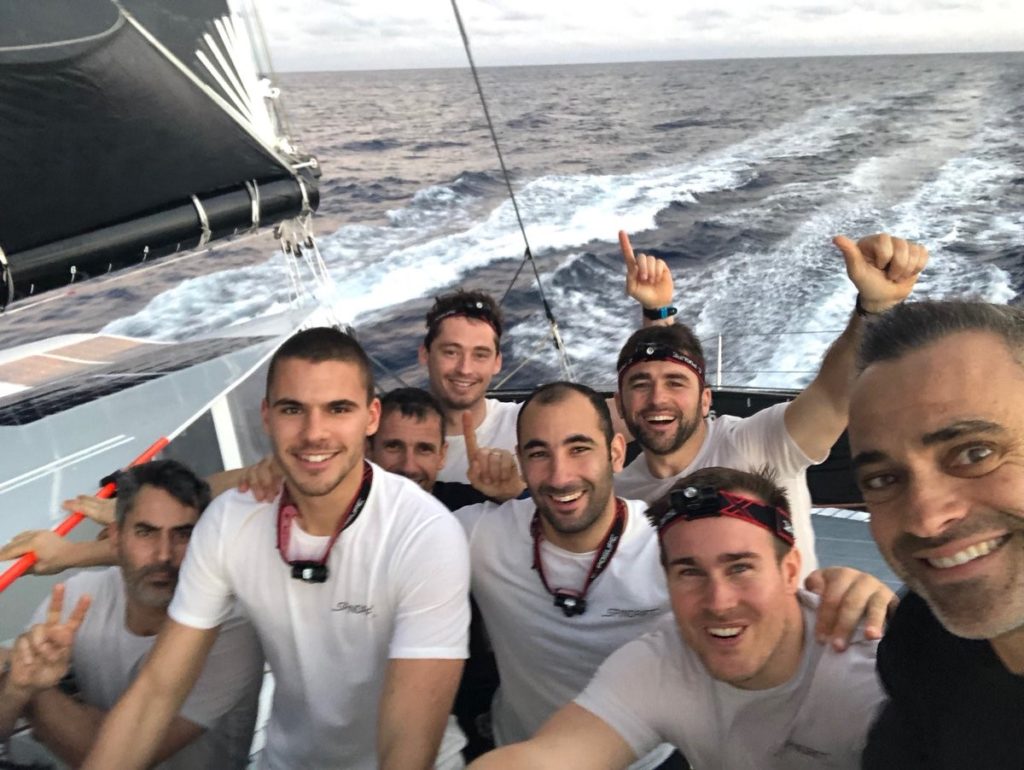 Full moon!
“We entered the Doldrums at 2° North: they were not very active, so we had to get through in relatively little breeze, but it was especially nice to have the full moon when we crossed the equator: we even saw the eclipse! It was beautiful for a good hour. Everyone has really been on the pace and the modifications that we made to the coach roof have been a real bonus – we are definitely less exposed. The route to the equator was not easy: we had quite lumpy seas in the lead up to the islands, then we had to gybe a lot and passed right through the Canaries and Cape Verde archipelagos” said Yann Guichard, a few moments after crossing the equator.

However, the team is not out of the Doldrums yet, as they are currently stretching some 120 miles to the south of the Equator. The team will have a challenging six hours or so before they can hook into the south easterly trade winds blowing off Brazil. But the good news is that a strong front is due to leave Cape Frio (off Rio de Janeiro) on Tuesday.

“We will leave the Doldrums at about 2° South, and then we will have to get around St. Helena anticyclone that is forming to the East, so we will have to go to about 37° South before turning left towards the Indian Ocean. It makes the route longer, especially as we will have to cross a light weather area in three days, but we should then reach favourable NW winds. It will be a relatively slow descent – but we should be a little ahead of Francis Joyon and his crew by the time we reach Cape Agulhas”said the skipper of ‘Spindrift 2′.

The next goal is the tip of South Africa. Francis Joyon and his crew crossed the longitude of the Cape Agulhas after 12d 21h 22′ at sea. So, with a 23 hour advantage on this first stretch, Yann Guichard and his crew can hope to stay half a day ahead before entering the Indian Ocean. This same trimaran, when it was ‘Banque Populaire’ in 2012, took less than twelve days from Ushant (11d 23h 50′).

‘Spindrift 2′ still has some 3,200 miles to reach this longitude, but the black and gold trimaran has been averaging 26 knots since leaving Ushant, and covering more than 620 miles a day – including the passage through the Doldrums!