Interview Brian Thompson: “I Have Always Had the Ambition to Do the Solo Jules Verne”. 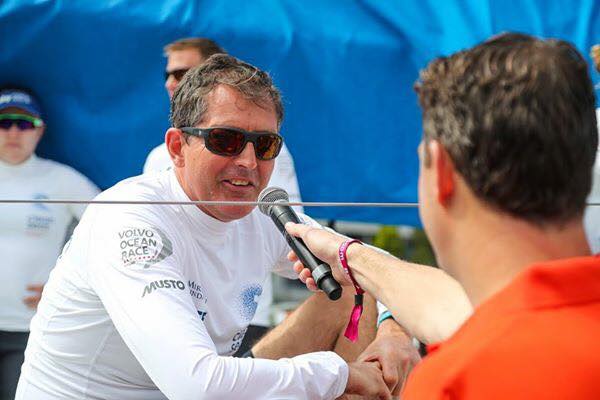 Brian Thompson holds more ocean sailing records than any other British sailor. He became the first Brit to twice break the round the world record, starting out with Steve Fosset in 2004 and in 2012 with Loick Peyron on ‘Banque Populaire V’. He was on Mike Sanderson’s winning ‘ABN AMRO’ crew in the Volvo Ocean Race 2005-6 and raced to sixth place on the 2008-9 Vendée Globe. Right now he enjoys a niche as the ‘go to’ super reliable man in what is proving to be an active group of Multi 70s. Thompson has sailed just about every major ocean and offshore race worth doing, most recently adding a Cape2Rio victory on the former ‘Prince de Bretagne’ and will tick off one other contest missing from his CV when he sails the Multi 70 ‘Beau Geste’ in the China Sea Race. Tip & Shaft caught up with Thompson as he contemplates the Caribbean 600 Race where three Multi 70s are expected…..

Your first Cape2Rio Brian and a win, how was the race, it seems like an event gaining in popularity?
Cape to Rio was fabulous. The course is just incredible. The two cities that you start and finish with are both beautiful and then the course is amazing. It’s normally downward VMG the whole way, but this time the High was a bit more messy so we went half way and then cut down across the High and then down through a cold front. It was still mainly VMG, but not the classic downwind all the way. We were very close with ‘Maserati’ the whole way as you could see. They had some issues with their foil rate control, but it wasn’t a major hindrance to them.

So, on the former ‘Prince de Bretagne’, you and ‘Maserati’ were pretty closely matched weren’t you?
Yes the boats were pretty matched. Our boat is the old ‘Prince of Bretagne’ which is built on the beams of the ‘Sodebo’ ORMA 60, but it is really a whole new boat there are three completely new hulls. The layout is quite different to a MOD70 (multi one-design). It is it is much more solo orientated.

The Cape2Rio is a race you think will become more interesting to international teams and big multihulls?
I really think so. I am a big advocate for this race. Nowadays people area able to ship boats around a whole lot more. I think if people ship their boats to Cape Town race to Rio then it’s actually a relatively easy sail to get to the Caribbean 600.

A future IMOCA course perhaps?
Wow. I think it would be great. I do think it would be better if it were more sponsored and more funded. I think it might be good for the TP52s. It’s kind of like the Transpac but better. There is no cold reaching and both cities are amazing places to visit, I think they’re both places that should be on everyone’s bucket list.

You have become very much the ‘go to’ man for the Multi 70s, it seems there is quite a bit of activity?
Right now two boats are coming in through Panama from the West coast and ‘Maserati’ are coming up from Rio. We are all going to meet up in the Caribbean. All three of us will get together for the Caribbean 600 and hopefully the ‘Love Water’ boat that we did the Cape2Rio on will come up for the 600 as well. They are looking for paying guests to come on board.

Where are the other Multi 70s?
Karl Kwok has got one that’s in New Zealand just now that is going up to do the China Sea race in April/May and I will do that with them which is great. Right now on land in France are ‘Spindrift’ and ‘Race for Water’. They are available. You might see one of them going back in the water soon. In America there is ‘Orion’ which is for sale in San Fransisco. There were seven built. And they are slowly being developed which is quite interesting.

Who is doing what then?
People talk about keeping them One Design, whatever……. they are still very similar in speed – ‘Maserati’ is obviously the one that’s changed the most. It was ‘Gitana’ and they used it as a test bed with Verdier for testing foils so they made it asymmetrical. They sold the boat to Giovanni Soldini and he made it symmetrical with foils on both sides. It’s very like an Ultime team in that it has lifting T-foil rudders and then also a foil at the bottom of the dagger board which is something the Ultimes have too- so it is very much a mini Ultime That makes it probably the fastest boat in certain conditions, so reaching, flat water, it will fully fly and obviously be quicker. But I think that they need 16-17 knots of wind to fly properly and overcome the drag. In less than that, increasingly so as it gets lighter the standard MOD is a lower drag and slightly quicker- not massively. ‘Maserati’ are slightly slower in the light, slightly faster in the windier weather. Overall you can see that the results are fairly similar and they are obviously slightly more vulnerable to damage from floating objects.

‘Argo’ and ‘Powerplay’ are close in their set up?
They are both slightly developing their foils for the 600. ‘Argo’ has some new foils and T-foil rudders that are developed from Martin Fischer that are by VPLP and Brett Ellis. That will all be new this year so we (‘Argo’) are going to be testing it next week in Antigua when the boat goes out. ‘Powerplay’ have new tips on their regular MOD foils. The ‘Argo’ foils aren’t massive- they aren’t like ‘Maserati’, more a refined version of the MOD foils (but all new), whilst ‘Powerplay’ have modified the existing foils to put the up tick on and apparently that’s made quite a bit of difference. They are talking about putting the foil rudders on, but I’m not sure they will do for the 600.

The boats are amazing and have really stood the test of time?
They are amazing, between all seven of them they have done so many miles. Giovanni Soldini is about to do his second around the world in two years on the boat. They are just so incredibly well engineered and well designed that there has been pretty much no problems with the boats. They were perfectly built, designed, conceived and engineered for that round the world race which was planned. Remember it was to go through Panama, up to Asia and round to Cape Town. We have done bits of the course several times. We’ve been through Panama to Hawaii several times. Giovanni has carried on and done pretty much that planned race twice. He’s done the Hong Kong – London record. These boats are quite capable of taking 5/6 crew around the world so the whole project has created a perfect boat for that – it’s just a real shame that the race didn’t happen. They could easily be put back into a one design format- everyone has got the same rig, everyone could easily get the same foil cases back in and it could go back to one design. Even though a few of them are slightly different and they all have different sail designers, they are basically the same, some have got slightly bigger heads on the main and slightly bigger jibs, but there is really not much difference. If you lined up any of the MODs from ‘Maserati’ to a completely standard one you really wouldn’t know which one would win a race, it’s still down to the sailors and the routing, preparation and the luck.

What do you see as the Multi 70s medium term future?
I think all of the owners of the boats are very open and are trying to align their programmes to race together. Giovanni is very open, wanting us all to come down to do the Cape2Rio next time. I think ‘Powerplay’ and ‘Argo’ are doing the Bermuda race, but ‘Maserati’ had commitments in Europe so can’t do that.

What is the cost of purchasing and running a boat?
It is way less than say a TP52 or an IMOCA campaign because the boats are quite reliable. I would say the boat itself you can get for €1.5m that’s pretty damn inexpensive for that much speed and reliability. If you spent a million a year you would do a very good programme, with a very good crew, buying a set of sails. Insurance is not easy though.

What is the key to winning over and above the usual needs?
Having drivers that know that boat or know multihulls. Obviously we have some great monohull sailors with us like Rob Greenhalgh can drive the boat fast. Good drivers know just where the limits are.

What is on the horizon for you? Do you have ambitions beyond the Multi 70s?
I’m very fortunately to be able to do a lot of MOD sailing this year – on ‘Argo’, then on ‘Beau Geste’. And I am working with Doyle Sails as a director (in the UK) with Adrian Stead and Pete Greenhalgh and focussing particularly on the multihull sails. In terms of future ambitions well I have always had the ambition to do the solo Jules Verne even before De Kersauson did it 20 years ago. I always felt that is where people would eventually be racing solo around the world and we are pretty much there, it is slowly happening. Will it be bigger than the Vendée Globe? I used to think it would, but now I am not sure, the boats are so expensive and fragile. I have always dreamed of doing that, but realistically I am not sure it could happen because it is so expensive to do. I did the IMOCA solo and have done so much fully crewed around the world, three times around the world, but never solo. That is the big dream. One Day. I sailed on ‘Macif’ for a 24 hour sail in the autumn, trialing for something with a party that was interested in buying the boat so I went along. In the end nothing happened. And obviously I sailed with Francois on the Caribbean 600 last year and now I am looking forwards to seeing the new ‘Banque Populaire’ on the water. It would be great to be with a team breaking the 40 day barrier round the world.

You keep a close eye on the IMOCAs?
I really like the new Sam Manuard design, I raced with him on the Mini and so I am happy to see him with a design. It will be exciting to see the scow bow and how it works. Maybe the bow profile won’t make all that much difference foiling. I follow Alex Thomson’s programme closely. I have my fingers crossed for him. He has a great programme with great people around him. It is shame to miss the testing miles on the Transat Jacques Vabre. I think he will get the miles in though and I’m sure he will be ready.

Who would your Vendée Globe podium be?
Definitely Alex, ‘Charal’ and Charlie Dalin. ‘Charal’ have the training, the speed of the boat and the ability of the skipper, I would like to see Charlie do well. Those three stand out. I think Charlie is another Francois Gabart and could win first time round. My head, looking at the odds, says ‘Charal’, my heart says Alex.