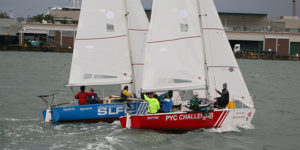 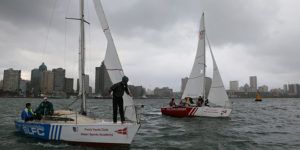 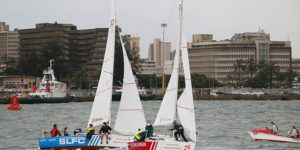 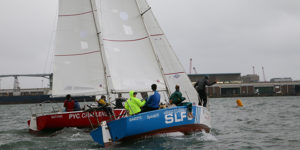 Yesterday afternoon, after a rain squall we continued the sailing for the semi-finals. Spectators were reluctant at first to join, but after the skies cleared a bit more the boats started to fill the area surrounding the course.

UP won the coin toss against UCT and decided to start on Challenger, and on the committee boat side.

DUT won their toss against Stellenbosch and chose the same setup.

Stellenbosch won the first race in a little bit of rain, but they floundered their start and was OCS in the second race, which made it easy for UP. Stellies came back with avegence to win their place in the final round to be held tomorrow (Friday).

The UCT and DUT race was a much tighter race. UCT took the first race after they luffed the DUT boat to force them to gybe around on the start line. The second race had to be abandoned after we had to clear the course due to shipping movements. The third race was taken by DUT. The fourth had the boats neck-and-neck the whole time, but UCT took the line by just a metre.

Today (Friday morning), the face-off between DUT and UP will be held first, followed by the Finals of Stellenbosch and UCT.

To wrap up there will be a fun race between the Race Committee and the Commodores of the competing clubs to end off the regatta.