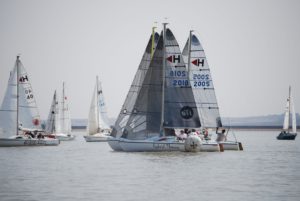 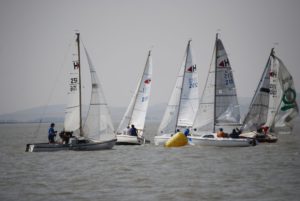 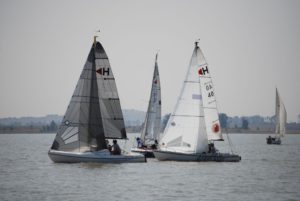 The 2017 Hunter Nationals are now a thing of the past, but what a fantastic regatta. This year the Nationals were incorporated with Keelboat Week 2017 which once again was an exceptionally well run affair. Kudos to the team at Deneysville Aquatic Club.

I always like to take a look at the representation of clubs on the entry list. The greater the variety the healthier the class. Not many keelboat classes can boast a representation of nine clubs at their nationals. There is no doubt that the Hunter Class is on its way back to full recovery.

This year we managed an entry of 28 boats, but 30 plus will become the norm again. We’ve also started to see some new faces in the lineup. Out of the blue we had an entry from Free State Yacht Club. Noel Harrison, it was great to meet you and kudos for making the effort.

Wasn’t it just awesome to see young Keala Giles (12 years old) helming for her grandfather Rob Sander. The two junior teams from WYAC of Michael Fogarty & Corbin Clack, and PYC of Brendan Humphreys and Tegan Herron, sailed well and it was good to see them on the start line. Certainly Michael and Corbin managed to get to every finish line. Well done lads.

Can you believe that Charles Girard (yes, he of Hobie Cat fame) has finally restored his Hunter. I think Charles’ Hunter has been in the Girard family since they built the dam wall.

Who would have thought that the Funke family would have taken a breather from the action of a 505 and entered the milieu of the Hunter fraternity. Welcome. The same could be said for Richard Weiderhold and Greg Plunkett who bought Simon Farrington’s old boat.

Although Paul Changuion and Tim Duguid won their third nationals in a row, one suspects that the old order is about to be shaken up with these new arrivals. The time has arrived for folks like Herbert, John, Dave and Tony to change their oil.

There was another new face in the pack at the front of the fleet. Our erstwhile chairman seemed to have found some afterburners and was always there or there about.

If there is one truism for the Hunter Nationals then that is don’t make a mistake. Hit a mark for example and you’ll say good bye to 10 places plus. Even if you are in the front of the fleet you don’t get them back easily.

The 2017 Nationals were a great success. I think the general consensus is that the class is back on track after having slowed down in the last few years.

CJ Milln remains chairman for another year and the Nationals will be held at Henley Midmar Yacht Club in March 2018. Before then the KZN championships will be held in November this year and then at the beginning of March next year the ever popular Mpumalanga Championships.

Finally, it would be remiss of me not to mention the most notable result of the regatta. Kingship 9th and Bounty 11th.