Hobie Worlds. Another Podium for Dodds 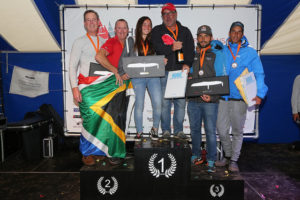 Blaine Dodds & Charles Girard on the podium.
pic by by Marcel Verheggen Fotografie

As the final two days of the event were cancelled due to wind issues competitors had to be content with their overall placings after just 6 or 8 races. So for those who were hoping for a late charge at a podium position, it was a case of too little too late!

In the Hobie Wildcat Class Blaine Dodds and Charles Girard ended up 2nd overall and must have rued their OCS in race 3, especially as they won the final race.

In the Hobie 16 fleet there was not a lot to cheer about for the RSA teams as the best overall placing went to Ewald Erasmus and Stephanie Goodyer in 16th spot. They were followed by Dylan Albert & James Butler in 44th; John & Andrea Ryall in 49th and Nicholas Ryall & Justin Butler in 54th overall.