Hobie Multiworlds. RSA Teams through to the Gold Fleet 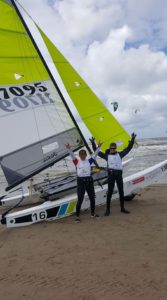 The Hobie 16 European qualifying for the Gold and Silver fleets concluded yesterday with RSA teams ‘getting gold’. The top 22 teams go through to the gold fleet event, which means that all 4 RSA teams competing made the cut.

A large swell greeted the Hobie 16 sailors in Noordwijk wishing to qualifying for the Hobie 16 Gold Fleet and the chance to win the Hobie 16 European Championships.

Many of the sailors decided it best not to leave the beach with the swell and shore break. Those that did venture out had four races in 15-20 knots of breeze and excellent surfing conditions.

Many of the sailors did only 3 races as they had done enough to qualify for the Gold Fleet. Those close to the ‘cut off’ and one or two others enjoyed the conditions they sailed the 4th race of the day.

Joining the Hobie 16 fleet today are the Hobie Tiger and Hobie Wild Cat fleets. The Wild Cat will be a world Championships where current world champion Mitch Booth will be sailing with his daughter Rita.