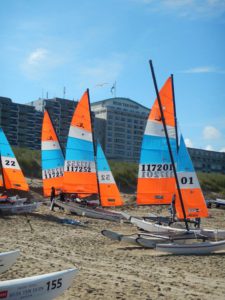 Yesterday had competitors on two courses, the Wild Cat, Tiger and Hobie 16 Silver on one course and Hobie 16 Gold Fleet on their own course.

The Hobie Wild Cat World Championships had only two races due to the wind dropping down to conditions that didn’t allow the boats to sail against the strong tide. Reigning World Champion Mitch Booth, sailing with his daughter Rita, won both races. Booth said “it was quite challenging conditions and easy to make a mistake and easy to slip back in the races”.

After two races it’s not surprising as the top three place setters are all Hobie World Champions, with Blaine Dodds & Charles Girard in 3rd place.

The 57 teams in Hobie 16 Gold fleet, all sailing with new sails and battens supplied by Hobie Cat Europe, managed 4 races.

Regrettably our RSA teams did not perform as well as one may have hoped, with Ewald Erasmus & Stephanie Goodyer being 25th overall, but ending the 4th race with a 3rd – having not fared well with double-figure results in the first 3 races.

Nicholas Ryall & Justin Butler, in 56th overall had a treacherous day with a Black Flag in race 1 and a DNF in race 4.

There is no indication as to why the majority of the H16 Gold Fleet ended with DNFs in race 4?

Here’s a link to a video interview with Ewald Erasmus after the first 4 Gold fleet races. See it HERE