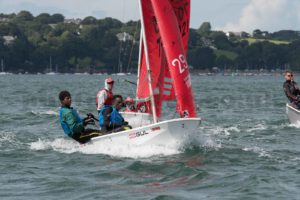 The harsh realities of international and world-class competition came home to roost on day 2 after the euphoria of day 1 when two RSA teams were in the top 10.

Regrettably all RSA teams dropped in the overall rankings on day two. Despite dropping 2 places overall on day two, Howard Leoto & Shane White remain in the top 10 in 8th overall, and still with results all in the top 10 with the exception of their DNF in race 4 which does not help them unless another discard comes into play later in the series.

Something our local sailors are not used to is the tide, and this may be the reason for them dropping places as the wind started off a bit lighter, and the tide played a role.

Race 5 got away cleanly under a ‘P’ flag. The wind had picked up a bit, and with the tide starting to ebb it was a bit choppy in places.

Race 3, using a windward-leeward course got away at the second attempt under a ‘U’ flag. By this time the wind had increased further.