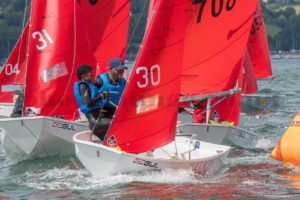 Day 1 of the Mirror Worlds ended well for the 6 RSA teams as Howard Leoto & Shane White were 5th overall after 3 races, while Paul & Polly Changuion were 10th.

Once the wind had settled into the south west a windward – leeward course was set although the first start ended in a general recall. The fleet got away on the second attempt under a ‘P’ flag. Leoto was 6th and Changuion was 10th.

Race 2 was set as a triangle – sausage course, with some overzealous teams being adjudged OCS. Leoto was 7th and Changuion was again 10th.

Race 3 used the same course and got underway under a ‘P’ flag, but with individual recalls. Leoto was 10th and Changuion was 19th.