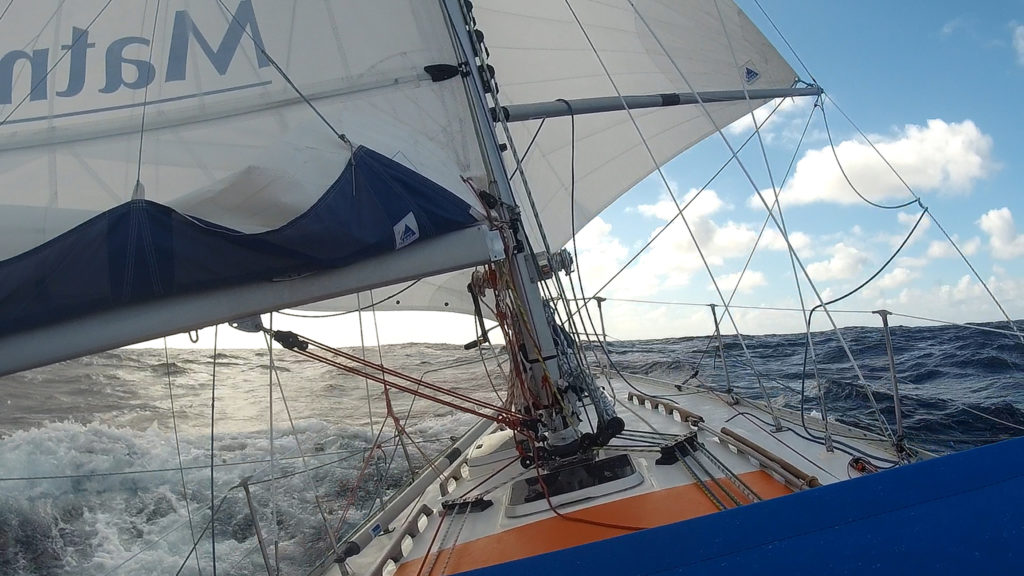 The embattled French leader nursing a damaged mast on his Rustler 36 ‘Matmut’ after the yacht was pitchpoled in a storm a week ago, has the prospect of having another Southern Ocean buster roll over him this weekend followed by two more when rounding the infamous Cape.

The 73-year old veteran is now within 1,300 miles of the Horn, speeding along at 5.3 knots, having ‘fixed’ the damage to his mast by climbing up and lashing the lower shroud fixing to the spreader bracket above.

In a radio broadcast last Friday, made over the Ham net, Van Den Heede spoke about his knockdown, which now transpires to have been a far more serious end-over-end pitchpole. Explaining his decision to continue in the race rather than head for Valparíso, Chile to make repairs, Jean-Luc said:

“I had plenty of time to think about my situation during these four days of escaping the storm (220 miles lost to the North).” My mast is now extremely precarious due to my capsize. If I stop to make a repair, it will be only temporary. For Matmut to continue sailing, it will need more or less to change to a new mast. So I decided, to save my soul (dixit Moitessier), to continue my route non-stop and head for Les Sables d’Olonne.

As soon as the sea will allow it I will climb the mast to secure it as best as possible with what I can use onboard. If I get dismasted, I have, like all competitors, a jury rig that will allow me to reach a port. I am no longer in racing mode, but in safe mode. This is not the first time I will attempt to bring home a damaged boat. And if by miracle I get to Les Sables d’Olonne, I do not care about the ranking, at least I will have tried. I cross my fingers and thank all those who help me in this adventure.”

In a subsequent safety call to Race HQ in Les Sables d’Olonne yesterday, Jean-Luc explained what happened in even greater detail to Don McIntyre. “He was not knocked down as we first perceived, but pitchpoled. He had already prepared for the worst, having screwed down floor boards, stowed loose items securely and closed the companionway hatch. He was in his bunk, and his storm tactic was to allow the boat to run freely downwind with 6 sq metres of headsail set and no warps trailing astern, steered by his Hydrovane wind vane self steering. Suddenly, the boat was picked up by a huge wave and surfed down the forward face, the bows dug in and the boat went end-for-end before rolling out on her side. Jean-Luc says that he was thrown out of his bunk and finished up on the ceiling surrounded by all manner of gear. Some water got into the cabin and everything got thrown around. It was a complete mess, and a week on, he is still searching for some things.” 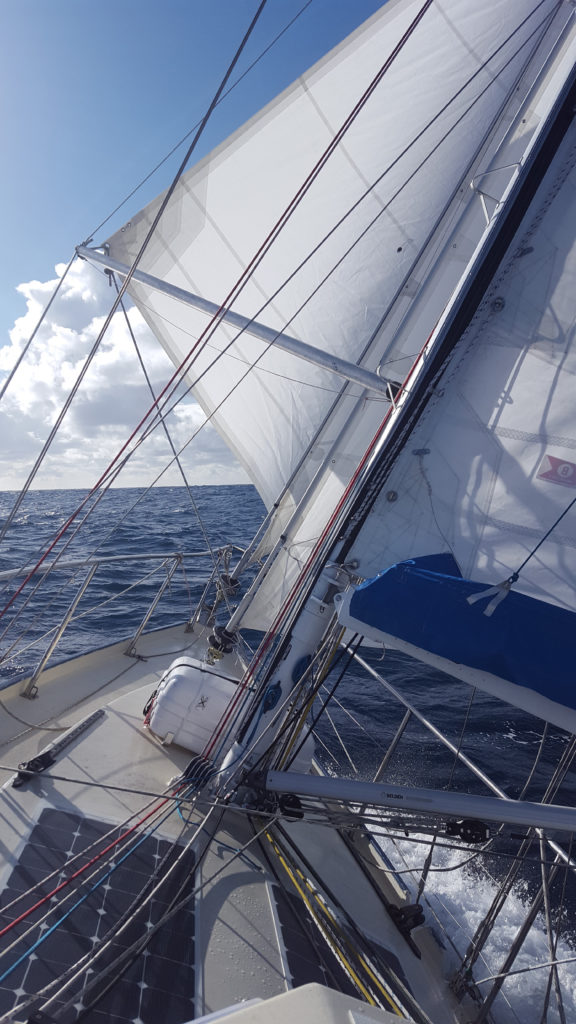 ‘Capt Coconut’ – Mark Sinclair – has been enjoying an easy ride so far, but staying north in the Southern Ocean, has not had the same amount of rain as others, and is now worried that he may run out of drinking water.
pic by Mark Sinclair/GGR/PPL

“The question of how to run before big storms is being debated by sailors all around the world and GGR sailors are being watched closely on what they are doing” observed Don Mcintyre. “Some believe towing warps is best, others say drogues are better, and a few think lying hove-to is the answer. Many believe running fast before the storm with nothing risks a knockdown or worse a pitchpole. JL VDH’s experience will certainly re-ignite the debate. Robin Knox-Johnston found that his double-ender ‘Suhaili’ behaved best when warps were towed. Bernard Moitessier on the other hand simply allowed his larger Joshua to run freely before the storms.”

JL VDH has climbed the mast four times since to inspect the damage and effect repairs. The damage is centred around the bolts securing the hounds of the lower shrouds to the mast just below the lower spreader bracket. He climbed up to the second spreaders to check for any damage there and fortunately found none. He has managed to tighten the lower rigging and is now confident that it is safe with the wind abaft of the beam. His concern is when the wind forward of the beam. He says that he cannot allow the boat to slam in the waves and will have to bear off to save the mast from further damage.

The approaching storm is expected to bring north westerly winds which will allow Jean-Luc to run with the wind and waves.

Meanwhile, second placed Mark Slats sailing the Rustler 36 ‘Ohpen Maverick’ has taken more than 500 miles out of Van Den Heede’s lead over the past week and is now within 1,500 miles of the leader. Slats has to average 1 knot more than ‘Matmut’ over the remaining distance to take the lead at the finish.

Further back in mid-fleet, both 3rd placed Estonian Uku Randmaa sailing another Rustler 36, ‘One and All’, and Finland’s Tapio Lehtinen aboard the Gaia 36 ‘Asteria’ back in 6th have both used the unusually calm conditions to dive over the side and clean the infestation of barnacles that have been slowing their yachts. For Randmaa, the pressure to dive into the near freezing conditions came because 4th placed Susie Goodall sailing the British entry ‘DHL Starlight’ has been closing the gap. For Lehtinen, the incentive is to catch 6th placed American/Hungarian Istvan Kopar who, after sailing half way around the world, is still struggling to get his wind vane self steering working effectively.

At the back of the fleet, Australian Mark Sinclair sailing the Lello 34 ‘Coconut’, passed where Frenchman Loic Lepage scuttled his yacht Laaland three weeks ago. He has only 45 litres of water left onboard and thinks he may have to stop in Hobart which would relegate him to Chichester Class. Russian Igor Zaretskiy is fighting to break clear of yet another calm, making only 0.5 knot early today. In a message to his team, Igor, whose Endurance 35 Esmeralda is also beset with barnacles, says optimistically:

“I am on my way to Tasmania. I had a plan to drop anchor near St Paul Island to try to clean off the barnacles, but have been forbidden to do it. (the area is a protected nature reserve) It will take a week to clean all these encrustations. Right now I have 2m swells with almost no wind at all, drifting north-east waiting fro the high pressure system to pass over me.

“There has been no sun, so I haven’t got a sextant fix for a few days. I also have a pile of garbage in the galley corner which I must bring back to Les Sables d’Olonne. I have no idea where to store it. For now, I am just sorting and packing the garbage where it is.

“Got the sad news yesterday that Jean-Luc has his mast damaged. It can happen to any of us at any time. I ran north from that storm. Had I stayed south I might well be further ahead on the course than I am now. I’ve not had any wind since then.

“Now experimenting with advice to fight the barnacles. I’ve tensioned a rope from stem to stern under the boat and waiting to see the effect. None so far. The rope is simply gliding over these barnacles. May be I should be using steel cable, I don’t know.

“The situation is a bit depressing at the moment. But I will get busy with the domestic chores, sewing and so on. There is lots of rope work to do all the time with the running rigging, scuffs and wear and tear.