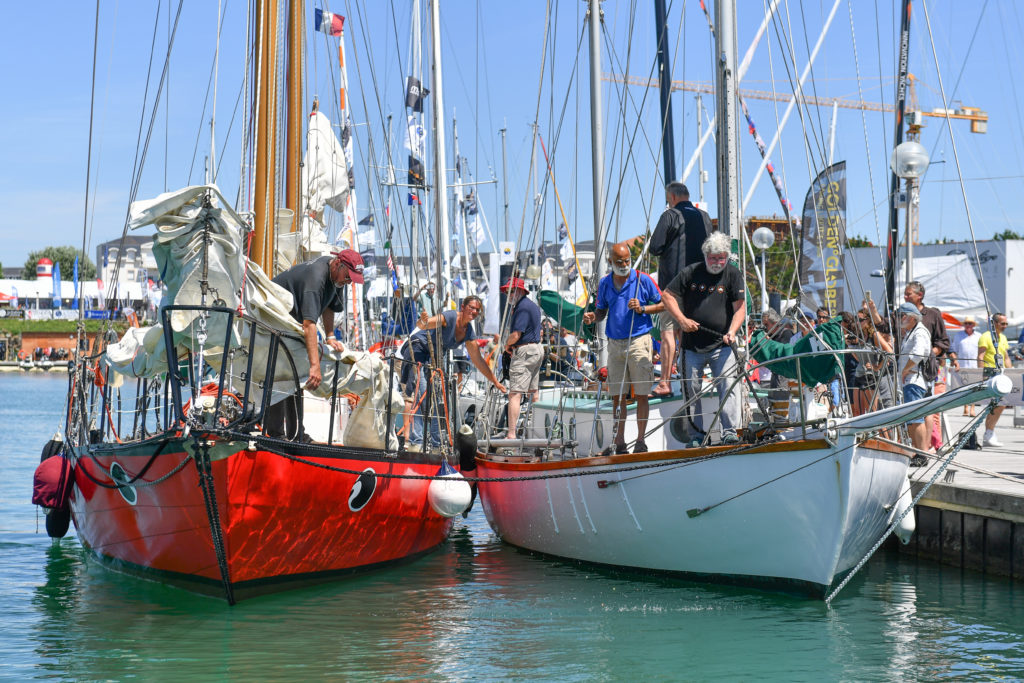 Two great men of the sea, Britain’s Sir Robin Knox-Johnston and French hero Bernard Moitessier never met or communicated with each other during the first Golden Globe solo round the world Race 50 years go, but their equally famous yachts, Suhaili and Joshua finally came together for the only the second time in history yesterday.

In an historic moment, the two classic yachts will mark opposite ends of the start line when Sir Robin fires a canon from the deck of Suhaili at Noon on Sunday 1 July to start the 2018 Golden Globe Race.

18 sailors representing 13 Countries will then set out from Les Sables d’Olonne on a great adventure to recreate the golden age of sailing, navigating their way around the globe just as Knox-Johnston and Moitessier did in 1968/9 using sextants, paper charts wind-up chronometers and a weather eye on their barometers.

Recalling that pioneering race back in 1968/9 which led to Sir Robin Knox-Johnston becoming the first man to sail solo non-stop around the world and Bernard Moitessier to famously turn east after rounding Cape Horn to ‘save his soul’ and make a second loop of the Southern Ocean, Sir Robin said: We never met because we started from different ports 6 weeks apart. I set out from Falmouth on June 14 1968 and Bernard started from Plymouth UK on August 22.” 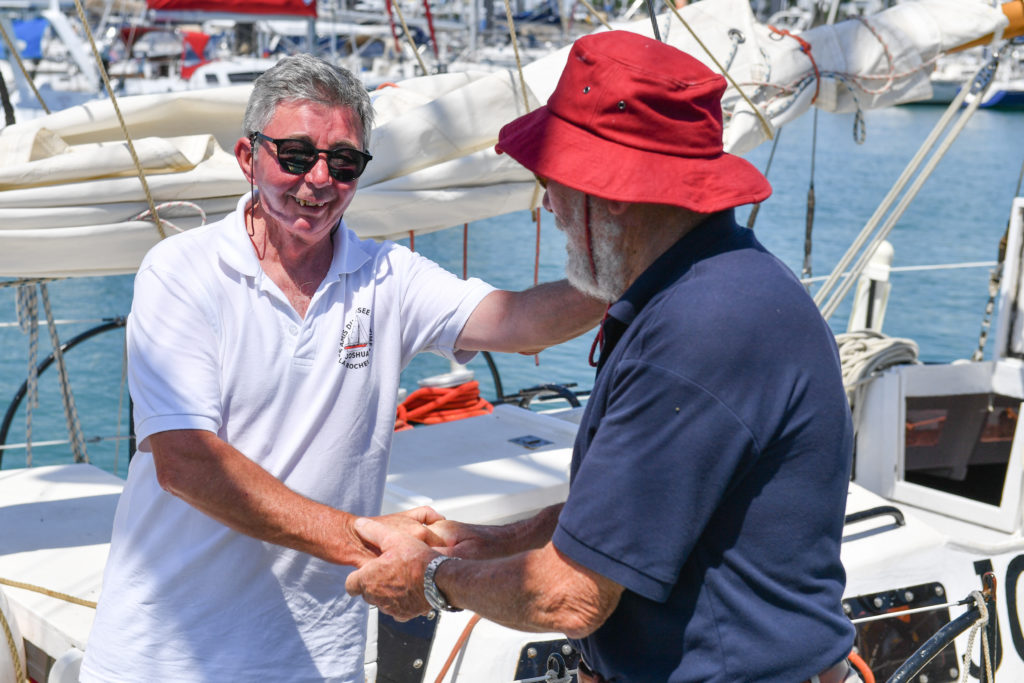 Nor could they communicate by radio because Moitessier refused to carry one, saying that any intrusion from the outside world would taint his voyage. In fact, he was against the whole idea of the Race, seeing sponsorship from the Sunday Times newspaper as a violation of the spiritual ideal to be first to complete a solo non-stop 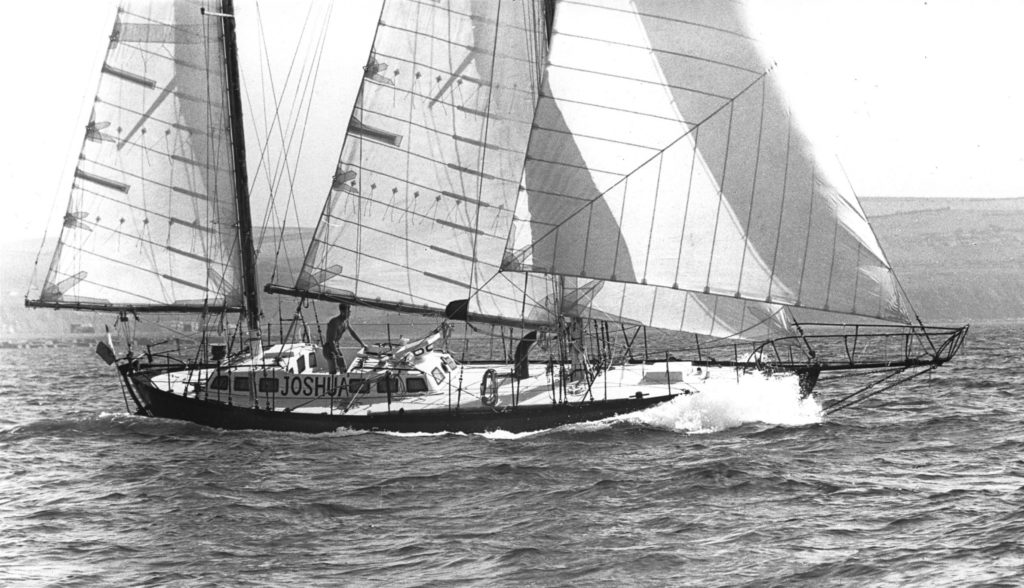 “Moitessier rounded Cape Horn on February 5, 19 days behind Suhaili and had he continued Bernard would undoubtedly have set a faster time around the world, but would not have beaten me back to the UK.” Sir Robin added.

“We finally met many years later at a press conference in Paris. Bernard was very generous, but suggested to me that he thought the race was lost as far back as Australia – his last contact with the outside world. I believe he continued on for a second lap of the globe after rounding Cape Horn because by then, he was at one with the sea and had no wish to return to an increasingly commercial world.”

One person who got to know Moitessier well is catamaran designer James Wharram who, many years later, built a boat with the Frenchman. “Bernard told me that he decided to continue on for a second circuit of the Southern Ocean because he said “I couldn’t bear the thought of President de Gaulle kissing me”!

Moitessier and Joshua finally pitched up in Papeete, Tahiti on 21 June, 1969 after 300 days at sea. He then stayed away from France and his wife Françoise for another 17 years and fathered a child, Stephan, with new partner Ileana in 1971. He continued cruising on Joshua until the yacht was wrecked in 1982 during a hurricane while at anchor in Cabo San Lucas, Mexico. She was one of 26 vessels to be blown ashore that night.

Dismasted, stanchions and pulpit flattened, hatches shattered, rudder gone, she finished up full of sand and seawater, dug deep into the beach.

That might have been the end of the story, but a team that included local lad Reto Filli, saw that the hull was still intact and spent the week digging a trench to pull Joshua up the beach. Once this was achieved, Moitessier gave his yacht to Filli, telling him to use what money he had to put Joshua back in shape. By all accounts, Filli rebuilt the yacht beautifully and sailed her to Seattle where American Johanna Slee, a professional mariner, bought her.

In 1989, Virginia Connor spotted the distinctive red ketch in Seattle and sent a picture to Voiles et Voiliers magazine. Once authenticated, Patrick Schnepp, director of the French National Maritime Museum in La Rochelle, flew across to buy her and arranged for Joshua to be shipped back to France. There, a team of Moitessier disciples painstakingly restored the yacht to near-original condition. She has a new engine and the aft cabin is now fitted out with bunks to give more people the opportunity to sail on her.

Unlike Suhaili which is not listed on Britain’s Historic Ships registry because she is 18cm short of their minimum length requirements, Joshua is listed as a French treasure, and lovingly maintained as a ‘living artefact’ by the ‘Friends of Joshua’ Association to give the public the opportunity to experience sailing on her.