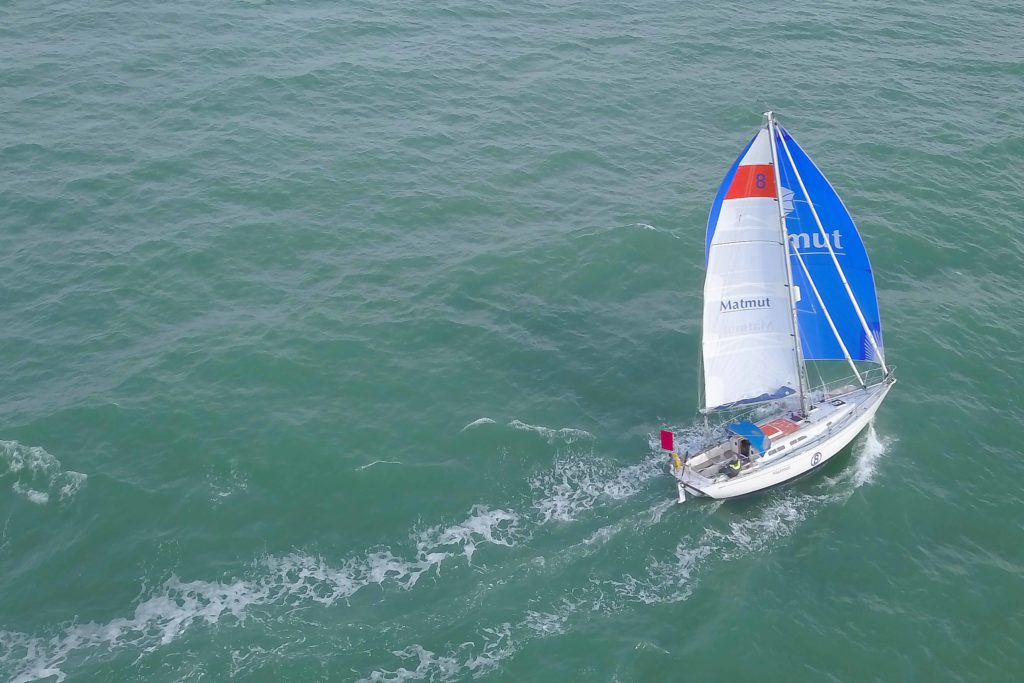 Jean-Luc Van Den Heede was forced to climb up the mast to recover his staysail halyard, but still leads by 9 days.
Pic by Christophe Favreau/GGR/PPL

73-year old Jean-Luc Van Den Heede continues to defy his age and best efforts of the chasing pack of Golden Globe Race skippers to extend his lead across the South Indian Ocean to 9+ days over the past week. The Frenchman is now a complete weather system ahead of his closest rivals and expects to pass Cape Leeuwin, the second of the three main Capes next weekend. He also remains on course for his compulsory stop in Hobart at the BoatShed.com film drop on October 3.

Before the start from Les Sables d’Olonne on 1 July, the best computer predictions suggested that the winner could complete a sub-200 day solo circumnavigation. Well, according to the YB tracker, Jean-Luc’s Rustler 36 ‘Matmut’ will return to the Vendee port in 199 days! That is based on her 5.2 knot average over the last 24 hours, which has to be optimistic, but with this septuagenarian, anything seems possible. Before today the worst thing to have happened has been a lost sailing croc, dropped overboard last week, but today Van Den Heede reported his first breakage. “The shackle connecting the halyard and top swivel on my staysail came undone. I had to climb the mast to the second spreader to reconnect them – I’m too old to be doing this! He admitted.

1,100 miles astern, 2nd placed Dutchman Mark Slats sailing the rival Rustler 36 ‘Ohpen Maverick’, has dropped a further 300 miles behind ‘Matmut’ during the past week. He has reported concerns about the state of his halyards, for without headsail roller furling systems, the constant changing of sails is causing considerable chafe. Another disadvantage is the need to drag the sails down below to repack them, which makes the inside of the boat both wet and cold.

There is much more of a fight for third place with Gregor McGuckin’s Biscay 36 ‘Hanley Energy Endurance’ just 1 miles ahead of Abhilash Tomy’s ‘Thuriya’, a modern replica of Sir Robin Knox-Johnston’s Suhaili. The Irishman texted: ‘MID INDIAN OCEAN & ABHILASH IS IN SIGHT ABOUT A MILE AWAY!’ 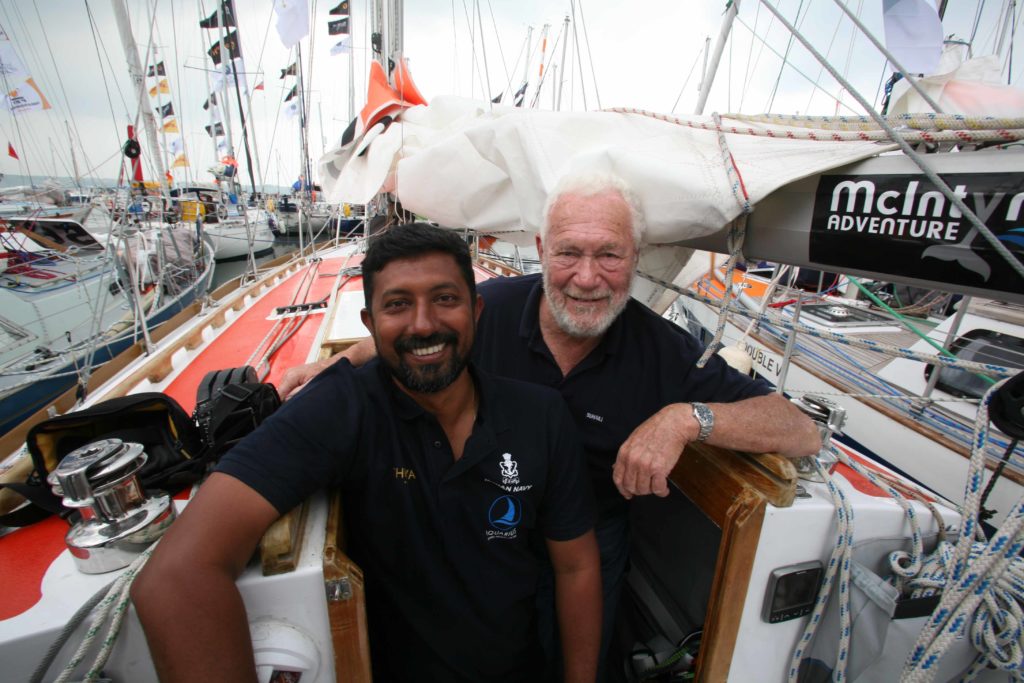 India’s Abhilash Tomy with his mentor Sir Robin Knox-Johnston aboard Thuriya – a 1923 design like Suhaili, proving itself one more in the Southern Ocean.
Pic by Bill Rowntree/PPL/GGR

‘Thuriya’ is the surprise package in this 50th anniversary of the original Sunday Times Golden Globe Race. Even Sir Robin predicted that she would be slow compared to the production yachts, but she and her skipper are proving to be exceptionally fast in the Southern Ocean, having moved up from 10th to challenge for 3rd place since rounding the Cape of Good Hope.

Tomy and McGuckin are now in VHF contact and constantly egging each other on with rivalry matched only by American/Hungarian Istvan Kopar’s Tradewind 35 ‘Puffin’ and Tapio Lehtinen’s Finnish Gaia 36 ‘Asteria’. Tracking showed them to be 37 miles apart and disputing 7th place, but that’s still close enough for Tapio to suggest that they should have fenders out at night!

Kopar is still plagued with wind vane issues and in a text report yesterday added: “50K SQUALL RIPPED JIB SHEET & MY ONLY YANKEE INTO PIECES DURING THE NIGHT.”

Estonian Uku Randmaa has also been in the wars. He reported “30-50KT LAST 24H. NOT NICE WEEKEND SAILING WEATHER” and in a follow-up call to Race HQ today added that his Rustler 36 ‘One and All’ had been hit by a big wave that had burst the spray dodger and buckled the frame.

Last Wednesday, Frenchman Loïc Lepage restarted from Cape Town in the Chichester Class following a forced stop to repair his SB radio and replenish fresh water supplies on his Nicholson 32 ‘Laaland’. In recent times, this African region has been beset by severe water shortages of its own, but the marina got special dispensation to turn on the water tap for Lepage. He made the perfect departure, crossing the Agulhas Current at its narrowest point then positioned his boat to benefit from three days of easterly current before diving down towards the Roaring Forty latitudes. 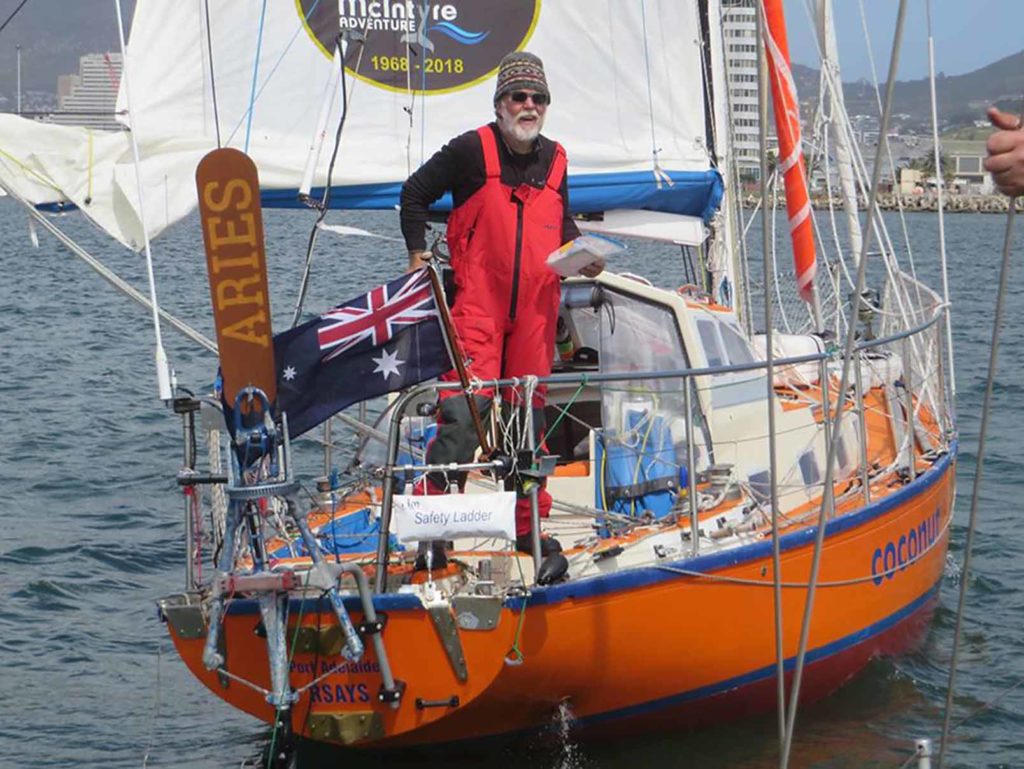 Following in Bernard Moitessier’s wake? Australian Mark Sinclair made an impromptu stop in Table Bay to hand across films, just as French sailing legend Bernard Moitessier did during the inaugural GGR 50 years before – then inexplicably continued cruising around the Cape and up the east coast towards Port Elizabeth, rather than follow the fleet down into the Southern Ocean.
Pic by Riaan Smit

Following in Bernard Moitessier’s Wake?
Australian Mark Sinclair made an impromptu stop in Table Bay to hand across films, just as French sailing legend Bernard Moitessier did during the inaugural GGR 50 years before – then inexplicably continued cruising around the Cape and up the east coast towards Port Elizabeth, rather than follow the fleet down into the Southern Ocean. Or was this a pilgrimage to the birthplace of his Lello 34 ‘Coconut’?

Sinclair was met by three other Lello owners, who took his package and listened to his stories. Riaan Smit reported “He was in great spirits and looked like – along with ‘Coconut’ – as if they had just popped out for a Sunday afternoon jaunt.”

Overcome perhaps by the welcome and mountain scenery, Sinclair then decided to cruise round the Cape and continue up the east coast despite the threat of light winds and need to cross the west running Agulhas Current at its widest point. ‘Coconut’ was 9th rounding of The Cape of Good Hope last Friday, was hugging the coastline 1.4 miles south of Cape Seal, and heading towards Port Elizabeth.

“We are left wondering whether to inaugurate a new ‘Hiscocks’ category for Mark to flag his passion for cruising round the world – and just hope he rejoins the GGR soon!” says Race Chairman Don McIntyre.