• Gregor McGuckin is Well and in Good Spirits

The Australian frigate ‘HMAS Ballarat’ will be within helicopter range of Ile de Amsterdam today and will commence operations to pick up Gregor McGuckin, one of two Golden Globe Race skippers dismasted during a fierce storm mid-way across the South Indian Ocean last Friday. 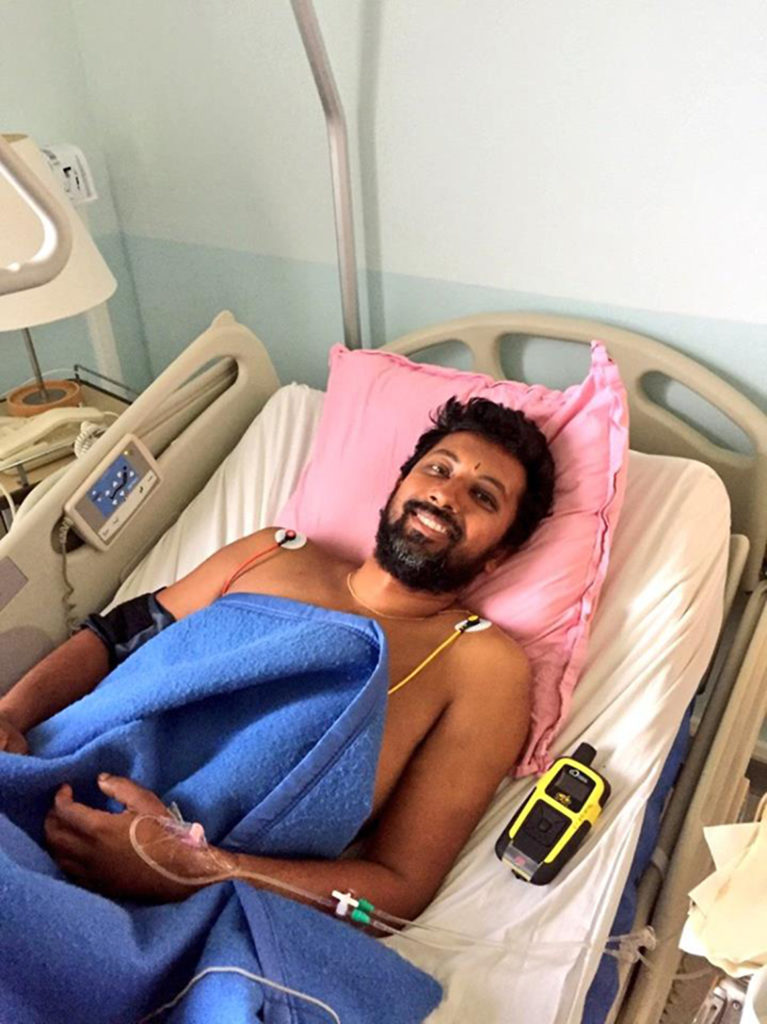 The second skipper, Indian Naval Commander Abhilash Tomy, who sustained serious back injuries when his yacht was rolled through 360° by 15m high seas, will remain in hospital until the arrival of the Indian Navy Frigate ‘INS Satpura’ on Friday, when he will be transferred by helicopter for ongoing medical treatment and return to India.

‘HMAS Ballarat’ will proceed back to Fremantle with McGuckin who remains in good health, arriving there on 2nd or 3rd of October.

From Commander Abhilash Tomy, reported by Indian Navy Tweet: “The sea was unbelievably rough. Me & my boat ‘Thuriya’ were pitched against nature’s might. I survived because of my sailing skills, the soldier bit in me and my Naval training cut-in for that fight – Very thankful to Indian Navy & all who rescued me”.

Capt. Dilip Donde, Abhilash Tomy’s manager, reported today that ‘Thuriya’s’ skipper can now stand and is eating and drinking, but requires complete rest. He will be evacuated from Ile de Amsterdam on a stretcher.

Capt. Donde also announced plans to salvage Tomy’s yacht ‘Thuriya’, left drifting in the Indian Ocean when he was recovered by the crew of the French Fisheries Patrol ship ‘Osiris’ on Monday. The plan is for the Indian Navy to tow ‘Thuriya’ to St Paul’s Island some 40 miles north, and leave a crew to make repairs and sail her to land.

McGuckin’s yacht ‘Hanley Energy Endurance’ was also left drifting when the ‘Osiris’ crew picked him off the yacht. In a statement today, Neil O’Hagen, spokesman for Team Ireland said: “During the controlled evacuation of ‘Hanley Energy Endurance’, McGuckin was instructed to leave the vessel afloat. The French fisheries patrol vessel ‘Osiris’ instructed McGuckin that scuttling the vessel would be in breach of international maritime regulations. Hence, McGuckin removed all debris from the deck that could become separated, secured all equipment on board, and ensured the AIS beacon was active. The power source to the AIS device is solar panels which should remain active without any outside assistance, reducing the risk to other vessels. Precautionary steps were also taken to ensure the relatively small amount of fuel onboard is secure.”

Golden Globe Race HQ in Les received a request from the manager of the 32′ sailing yacht ‘Selene’ for assistance from any GGR yacht in the area because her skipper Kjell Litwin is running out of water.

‘Selene’ is currently some 3000 miles west of Perth, Western Australia and unexpectedly has only 10 litres of water left onboard.

Istvan Kopar, the American/Hungarian GGR solo skipper sailing his Tradewind 36 yacht ‘Puffin’, was 20 miles to the west and was asked by Race HQ to assist.

GGR Race HQ has confirmed that Istvan Kopar is happy to share his water and has a container onboard. The plan is for Istvan to throw a rope to ‘Seline’s’ skipper with a 20 litre water container attached as ‘Puffin’ sails past. Kopar can use his motor on approach.

Istvan is sailing in 30 – 35 knot NW winds and 3 – 4m seas. The wind and sea is forecast to moderate slowly during the day.

‘Seline’ is NOT in distress. In the opinion of GGR organisers, Kjell Litwin, the skipper of ‘Selene’ knows that he is likely to catch rain water over the next month while sailing to Australia. But it is sensible seamanship to ask for water from any close vessels just in case. Istvan Kopar is more than happy to assist another sailor. Both yachts are expected to meet in the Southern ocean today.