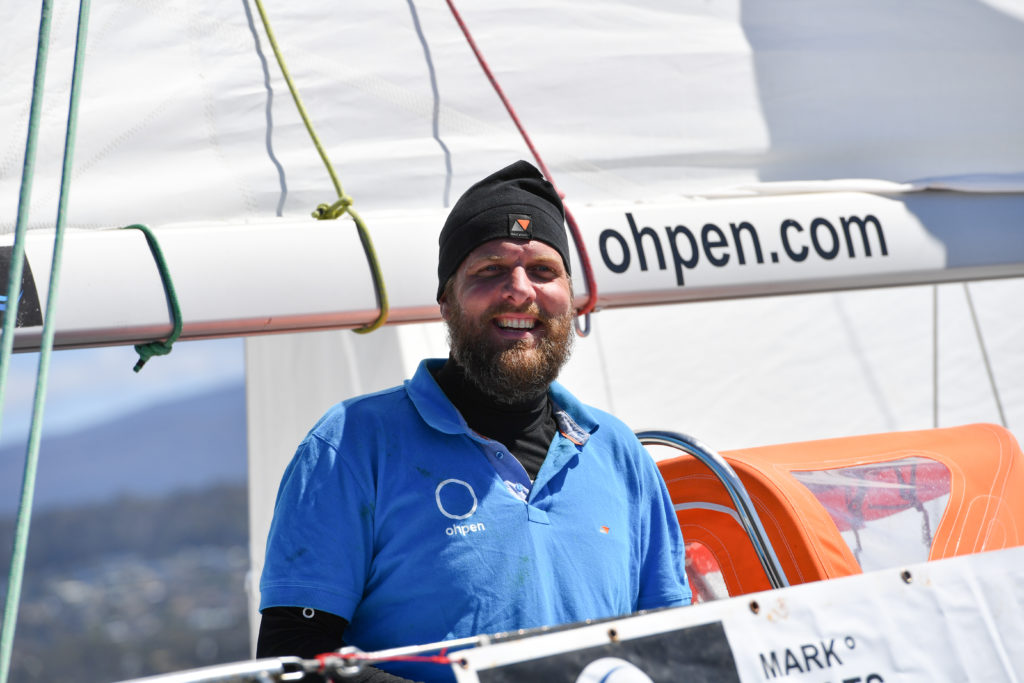 Slats is facing a dilemma: To run ahead of an approaching north-westerly storm and hope to reach the finish line off Les Sables d’Olonne on Thursday evening before it strikes the Vendee coast – a lee shore; lie hove-to outside the Bay of Biscay until the storm has passed, or seek a refuge, which is allowed under the race rules, provided he does not step ashore or communicate with the outside world other than via VHF or HF radio.

At 10:30: Race HQ received a communication from Dick Koopmans, Mark Slats’ team manager, asking for the Race finish line to be moved 50 miles offshore. This was denied.

11:59: Race HQ responded to Koopmans saying that Race Chairman Don McIntyre had sent a weather warning to Slats and that Mark and subsequently called via his safety sat phone to discuss the weather scenario. Slats advised that he was receiving weather forecasts onboard and was aware of the approaching storm. The email advised Koopmans that Slats was not slowing down and continuing towards the finish line. It added. “But if you want a message passed on the weather, we are happy to do that. Just email here.”

12:21: Koopmans replied by email saying that “I spoke to Geerit Hiemsta, one of our leading meteorologists in Holland…In his opinion it is completely unsafe to sail into the Bay of Biscay. He suggests to stay outside and finish in La Coruna or Brest, but not in Les Sables d’Olonne. This is also the (unofficial) opinion of the Dutch Coastguard and Falmouth Coastguard.
I am very unhappy with your advice and consider to call Mark on his Iridium phone, whatever the consequences may be.”

13:16: Race Chairman Don McIntyre responded: “Just a reminder, we never give directives to entrants. We give opinions and the final choice is up to entrants. Mark is receiving weather reports on his radio….
I would strongly suggest that you do NOT call Mark. I have offered to message him any advice you wish to send him in relation to safety avoiding the storm. I am awaiting for that advice. All decisions are the responsibility of the skipper. …I am now officially asking you for your advice on the safest route for him to take if you wish to be involved with efforts to send him to the safest place. I will then pass him that from you.”

13:28: message from GGR HQ to Mark. “Dick advice: head to la Corunna or Brest to miss the storm.”

13:33: Email from Koopmans to GGR: ”Ignoring authorities like Coastguard and top meteorologist. I do not trust the Race Committee on their knowledge in the situation. I think safety is now more important than rules.
I will send Mark messages to his Iridium phones from now on.
Advice from Mr Hiemstra – ‘Have a helicopter ready’

13:38: Race HQ to Koopmans: “Mark will be penalised for breech of rules. We have NOT been directed by any authority and if you look at your emails, we are awaiting your advice on where to send him. Your actions and comments DO NOT relate in the best interests of Mark’s race and we are both working towards Mark’s Safety. PLEASE place your message through GGR. If you need clarification, please ring. WE ARE STILL WAITING YOUR ADVICE.
YOU RISK PENALISING MARK FOR NO REASON AT ALL…YOUR CHOICE. WE HAVE MADE IT CLEAR WE CAN SEND ANY MESSAGE TO HIM. WE ARE STILL WAITING. YOU MUST NOT CONTACT MARK

13:46: Email from Koopmans to Race HQ: “Safety is more important than penalties. You can read all the messages later and decide on penalties.”
Koopmans ignored RACE HQ advise and messaged Slats directly – a direct breech of the Notice of Race.

16:00 (approx.): Mark phoned Race HQ to discuss the weather and asked permission to call Koopmans for advice, and asked for Koopman’s phone number. GGR agreed as Koopmans would not give GGR the safety information. At subsequent meeting of the Race Committee, it was decided not to provide the number since a call to Koopmans constituted outside assistance and a further breech of the Notice of Race.

16:12: Mark called Race HQ to say that he had altered course to La Corunna and confirmed that Koopmans had contacted him directly. Slats was advised that he now faced a time penalty.

The Race Committee will meet to access the evidence and any time penalty will have to be served at sea before the finish.

In a statement last night, Don McIntyre said: “There are two issues here. One is safety and we all work in the best interests of Mark Slats. The second is process under the Notice of Race. GGR continues to offer safety weather advice to all competitors. Unfortunately, Slats’ team manager decided not to abide by the Notice of Race.”