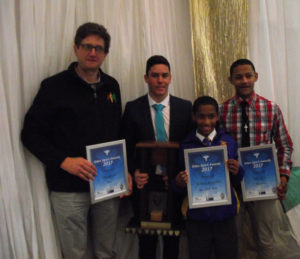 Annually, the Eden District (formerly SWD) Sport Council convenes the Eden District Sports Awards. All the 50 sporting federations in operation in this district are invited to make their nominations in the various categories, most prominent of which are Sportsman and Sportswomen of the Year.

Georgou Divaris was nominated by SA Sailing Eden District for Sportsman of the Year, in view of his achievements in the Laser and Fireball classes over the past year. Just prior to the awards, we were informed that he had been chosen as a finalist (one of three). The Award ceremony took place in the Civic Centre, Riversdale. With all three finalists on the stage, we were very proud when the announcement was made that the 2017 Eden District Sportsman of the Year is Georgou Divaris.

Eden Sailing also nominated Georgou Divaris and Ferdinand Holm in the team category – team ‘Flying Fireball’, in recognition of their performance in the recent Fireball Worlds in Mossel Bay. In this category, they were also chosen as a finalists.