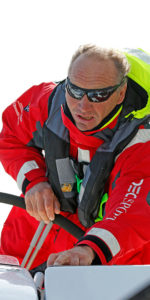 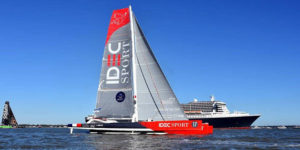 Idec Sport.
pic by B Gergaud

French sailor Francis Joyon crossed the longitude of the Lizard at 01h37 UTC this morning (Wednesday 12th July 2017). This marks the finish line for the North Atlantic crossing from Ambrose Light off New-York.

With a race time of 5 days, 2 hours and 7 minutes, at the helm of his maxi-trimaran IDEC SPORT, he has beaten his own North Atlantic record.

At the helm of his previous Idec, Francis Joyon completed the voyage in June 2013 after 5 days 2 hours 56 minutes and 10s shattering the record time set by Thomas Coville (Sodebo). He has therefore improved on his own record today by 49 minutes.

Joyon set sail from New York at 23h30 UTC last Thursday on his first solo passage aboard IDEC SPORT without any of the usual preparation, as his goal was simply to beat the cruise liner Queen Mary 2, which is now expected to arrive in Southampton on Thursday morning.