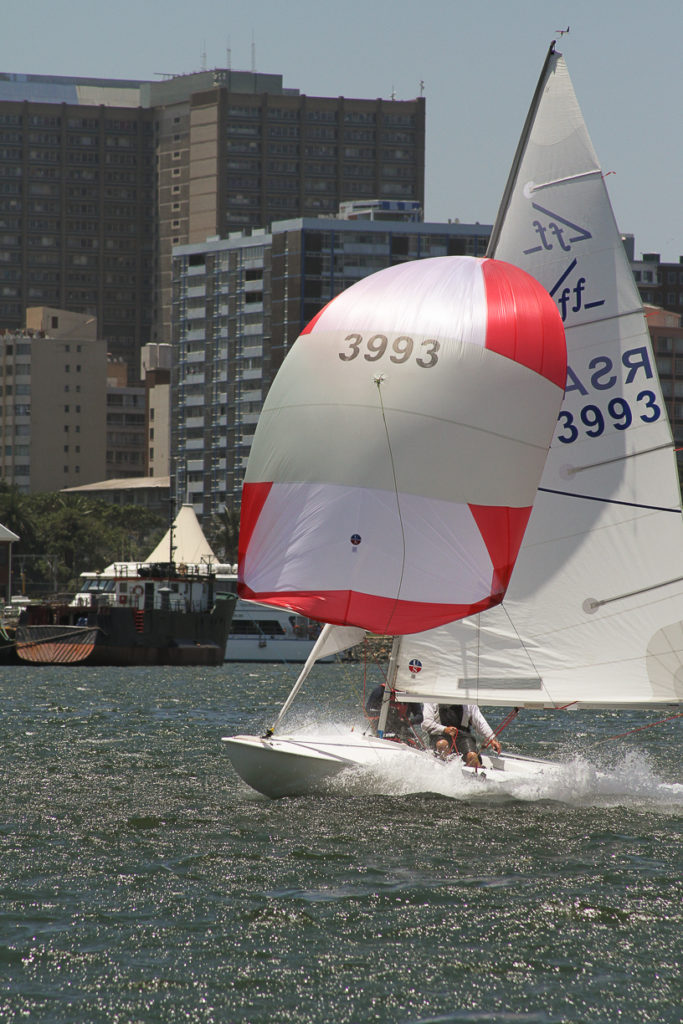 In the Flying Fifteen Nationals, no strangers to being at the front of the pack in the Flying Fifteen class, Patrick Harris and Jeremy Kriek led throughout the regatta, impressively taking top honours in eight out of the nine races, finding it heavy going in the light winds on the final day and finishing second behind Anthony McMillan and Danish sailor, Lauritz Walsøe. Pushing Harris and Kriek throughout the regatta, Campbell Alexander sailing with visiting crew, Dr Stephanie Brown from the UK, scored six seconds, a third and a fourth notching up a second behind Harris and Kriek.

In the Hobie 16 Provincials, the father and son team of Peter and Matthew Hall dominated on the water. The Hall team won all but two races in their eight race regatta. They were chased by inland sailors, brothers Kyle and Justin Lambie.

The Flying Fifteens had the biggest fleet on the water in recent memory, with 11 boats on the water. For the regatta to constitute as a South African Sailing event, they needed 10 boats to start and finish two races. The class was agonisingly close, but it wasn’t meant to be. On day one newcomers to the fleet, Father and son team of Dominic and Marco Collett thought they had enough clearance but hit the sand bank. On the second day offshore, the heavy weather took its toll with Campbell Alexander taking a bite out of Greg Hurters boat, and Hurter and his crew, Michael Surgeson had to limp home. Collett squared took to the ocean for the first time, bravely flying their spinnaker but as luck would have it, a rogue Hobie 16 pitch-poled directly in-front of them, with the mast crashing down onto them, knocking Dominic on the head and into the water, earning him five stitches and sadly destroying their chances of completing a race.

Brown, who sails for Rutland Sailing Club in the British Midlands said, “The sailing was great fun and we were lucky to have lots of wind Saturday and Sunday. Campbell was a fantastic helm to crew for and the fleet was a high level of competition, but very welcoming. It was lovely to see such strong support for the newer sailors. The warm waters and big waves were a wonderful change. Thanks to you all for a great trip!”

“Sailing was amazing, a tough race since I had close to no prior experience with FF15 and symmetrical spinnakers. Since I usually sail Lasers the whole event was one big learning curve. The fleet is strong but we had some good races!” enthused Danish sailor, Lauritz Walsøe.

The first day of racing was held in the bay, with conditions being hazardous offshore, with a short, sharp swell and high winds deterring Race Officer extraordinaire, Kevin Bingham. Four races were run in a blustery North Easter course. The second day, racing went offshore with the winds consistently around 15knots and over adding into the mix a bit of a running swell. Bingham got in another four races on Sunday. The entire fleet of Flying Fifteens however, disappeared early from the race track, leaving only the Hobies to sail in the final race on Sunday. On Monday, keeping an eye on the inclement weather enroute, the Hobies didn’t venture onto the water with a depleted fleet of Flying Fifteens gathering ahead of the spectacular midday storm.

Hobie hero, Garth Loudon only sailed the one race, with his brand-new crew member, his daughter Kristin. A delighted dad said, “Kristin finally showed interest in sailing, so we had a quick lesson on Sunday morning and entered one of the races. It was great to be back on the water again! We managed a second place in good winds. Peter and Matthew were sailing very well, was good to see!”