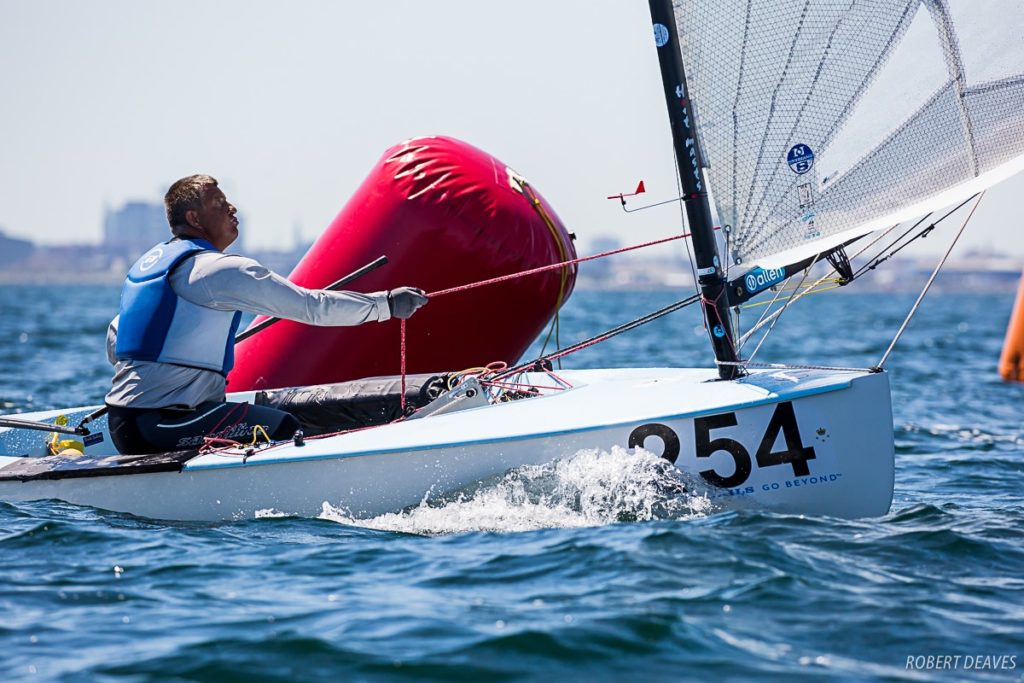 Vladimir Krutskikh on his way to winning his 3rd Finn Masters title.
pic by Robert Deaves

It seems as if our RSA contingent, or most of them anyway, left their best results for the final day as Philip Baum, Alan Serritslev and Leon Ferreira all posted their best individual races.

Not anywhere close to being on the podium, their results collectively and individually, showed that these guys are still tough, fit and determined enough to head out for 5 consecutive days of racing in what has always been a demanding singlehanded dinghy to race well.

Krutskikh began building a picket fence on Monday and carried on each day picking up first places in each and every race. His final score of seven wins from seven races is remarkable given the calibre of the fleet and the challenging conditions.

Krutskikh explained his victory. “The regatta was very beautiful for me because I had a local coach from Denmark, Christian Rasmussen, who helped me a lot because every day he told me about the forecast, the current, about changes in the wind, so that was very good for me, because he knew some tricks with the wind and clouds.”

“The regatta was very beautiful because there were lots of very strong sailors. For this regatta the start was very important, and tacking from right side as it was a very strong current. For this reason I try to play close to committee boat.”

“For me, everything was good. I won seven races so I am very happy.”

“This is my third Finn World Masters title and I’ll be back next year to defend in The Netherlands…probably.”

In 2020, Finn Masters from around the world are invited to gather in Port Zélande, in The Netherlands, for the 50th Anniversary Finn World Masters, which is already promising to be the biggest Finn event on the planet…ever.