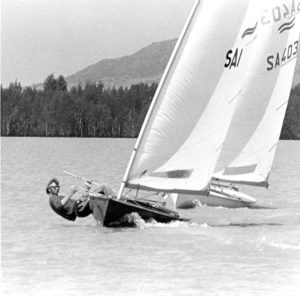 Natal skipper Dave Booth hanging well out to show good balance and trim. He is followed by W Gardiner. This was taken in October 1975. 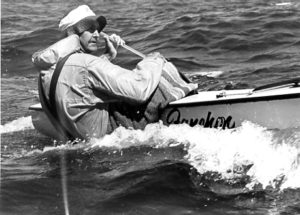 In typical pose is Ernie Shaw, another who was always able to hike forever. The pic was taken by Richard Crockett 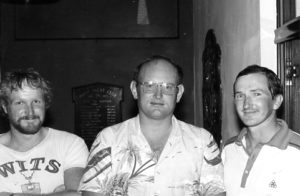 There is no caption for this pic, but most ‘elderly’ Finn sailors recognise that the long legs propelling that body as far out as possible is David Booth. Not sure who is behind him. 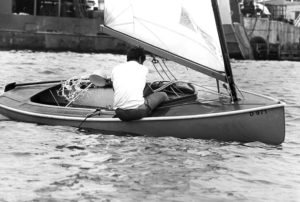 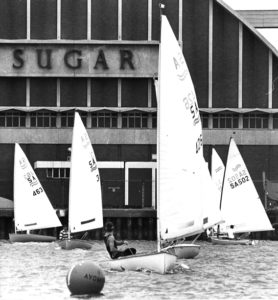 All this pic caption says is” “Domett still in the lead’! 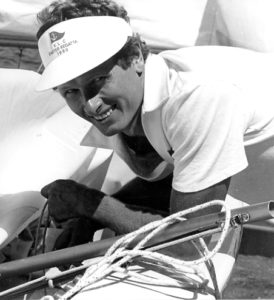 Grant Davidge-Pitts, who with his brother Keith’ designed this new Finn. (As can be seen this was in 1980)! 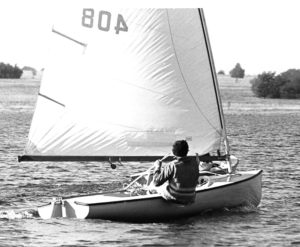 Francis Girdlestone, one of the top Highveld skippers during the Finn Inter-club held at Pretoria Sailing Club. Andrew Tough has provided the following info about Franci: Franci is now 73 and is actively involved in guiding most of the PSC Finn fleet with everything from improving their boats to helping with settings. He is also often seen on the water helping with bridge and rescue. He still has a Finn which he sails from time to time and is, as we speak, preparing to drive down to the National’s to assist and support the fleet. He is a great mentor to us all. 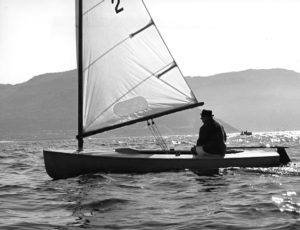 T.P. Hamilton-Russel of HYC sails ‘Fabius’ down towards Long Beach. Is ‘TP’ related to the famous vinyard? 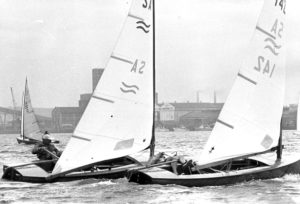 All the atmosphere of a hard-fought race is conveyed in this pic with its contrast in style. Nearest the camera is Peter Collins (without numbers), putting every ounce into his effort. In the other boat is Jimmy Whittle. Collins’ sail numbers literally came unstuck and the judge was astonished to see that 171 became 17 then 1 then nothing!

With the Finn nationals due to kick off very soon and the Class boasting an expected entry of 30 boats, I have raided my archives and found some really interesting old Finn pics.

So all you FINN-atics out there, please put your heads together and see if you can fill in the gaps, or add additional info, to what I have provided from what is on the pics. Additional info, anecdotes about those in the pics and more would be appreciated.

I urge you all to be proactive and enjoy the exercise as I have at least ten pics a day ready to roll over the next few days. No feedback – no more pics!

Keep scrolling to the end as there are 10 pics to enjoy.

Send the info to: editor@sailing.co.za – or be interactive on the SAILING Facebook page.