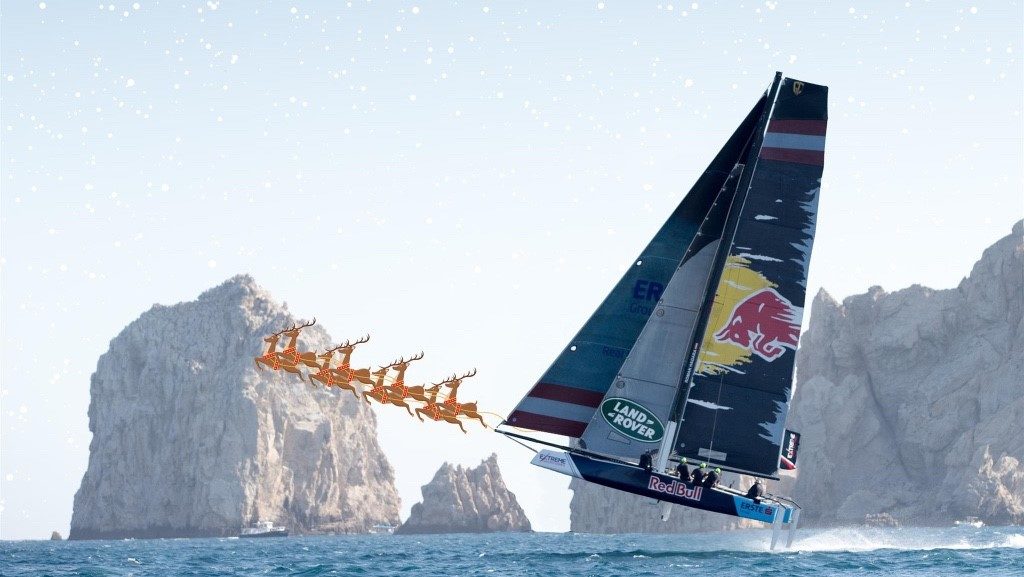 The Christmas and New Year wishes from the Extreme Sailing Series, a Christmas themed poem, is too good not to share. Enjoy.

‘Twas the night before Christmas, and those with sea legs,
Were dreaming of waves as high as mastheads;
The stockings were shackled to the transom with glee,
In hopes that St Nick would find them at sea;
The sailors were nestled all snug in their quarters,
With visions of sun, fair winds and calm waters.

The salty old captain, tiller at his hip,
Had just set the bearing, for a long passage trip;
When out on the horizon arose a bright light,
So I sprang from the bed and looked out to the night;

The ocean on deck greeted me with a splash,
As I asked in despair, “was that a crash?”
Our vision impaired by the fog growing thick,
Was it a crash, or do my eyes play a trick?

When, what to my wondering eyes should appear,
But a miniature sleigh, and eight wet reindeer;
A spluttering driver, scrambled up from the floor,
And called to his reindeer, “let’s try that once more”;

Over the mast the red sleigh did fly,
As the captain and I tipped our heads to the sky:
“On Dasher, On Dancer, On Prancer and Vixen,
“On Comet, On Cupid, On Donner and Blitzen;

The reindeer dragged the sleigh around in an arc,
Glowing so bright as to banish the dark;
Lining up from aloft, he aims for the yacht,
It seems that the driver will give it a shot;

But if he landed on water, surely he’d sink,
His sleigh and his cargo, all bound for the drink;
But onwards he pushed, like a runaway train,
The reins on the sleigh screeching under the strain;

Now inches from the water, the spray did rise,
Whilst the captain, he quivered, hands over his eyes:
With a bang and a crash and a thud and a scream,
The driver had nailed it, and stopped just abeam;

From the red sleigh the driver boarded our boat,
Wearing boots of fine leather and a shiny red coat;
The captain demanded, “tell me who you are”,
“Why I am St Nick, and I come from afar”;

“I come bearing gifts, you have nothing to fear”,
“For tonight is a very special time in the year”;
From his sack pulled St Nick, a gift wrapped in gold,
A present for me on that Christmas so cold.

What joy it did bring on that lonely dark crossing,
To have something to put in my damp Christmas stocking;
And for the old captain, whose nerves were now calm,
A gift for chapped lips, some soothing lip balm;

“Now” said St Nick, “it is a true shame”,
“But I must now be gone, as quick as I came”.
His bold, loyal reindeer could tread water no longer,
As the wind and the waves; began to grow stronger;

With a ‘Ho Ho Ho’ he hopped back in his sleigh,
With the whole world to visit, before the next day;
In the blink of an eye he was gone in a flicker,
Leaving a dusting, not snow, but of sparkling glitter;

Wiping tear from my eye, I’d never felt such delight,
Happy Christmas to all, and to all a good night.

– a poem by Martin Evans