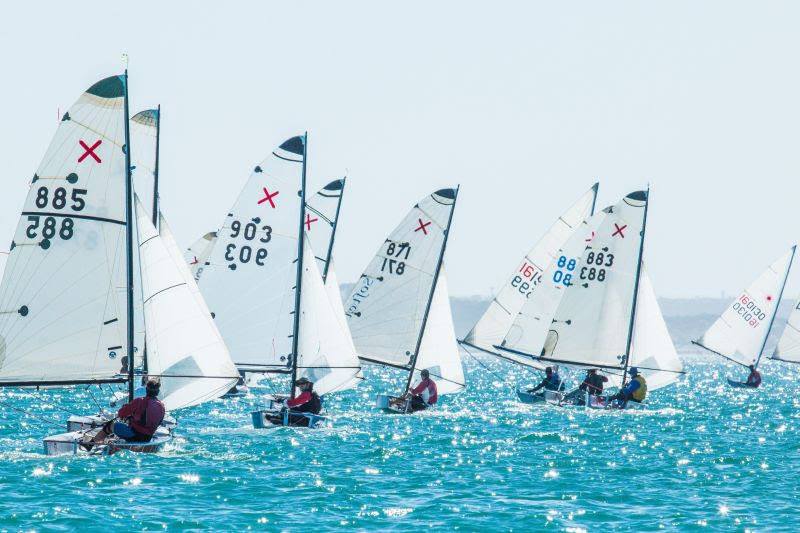 There was a large, competitive Extra fleet that consisted of 15 boats on the water. This is by far the most Extra’s that I have lined up against during any regatta, we even managed to get our very own General Recall!!!

Among the old (regulars) were three new faces, Gail Wheeler, Taariq Jacobs (managed to get a couple of race wins under his belt) and Sean Mackay . Hopefully we are going to build on these numbers and have this size fleet more regularly at more events in the future! After 3 days and 8 races of close competition, it took the final race to determine the top 6 positions.

Day 1 consisted of one light wind race that favoured the lightweights in the fleet (I’m looking at you Taariq!). It was also the day in which many Extras got their first wash in who knows how long! There were some very strange looking ‘boats’ on the trailers when everyone arrived.

Day 2 greeted us with absolutely no wind at all! Eventually, just after lunch, the wind picked up to a nice breeze that soon developed into a strong, but still manageable breeze. We were able to get four races in the bag which allowed us to get our first discard (which some needed more than others, due to one sailor sailing another loop). The results after the second day’s racing ensured that it would be a very interesting final day of racing!

The final day consisted of a light breeze that would build to similar conditions as the previous day. This was the day in which many personal fights would take place to determine who would finish where. There was a 1 point gap between 1st and 2nd place, another 1 point gap between 3rd and 4th and then yet another 1 point gap between 5th, 6th and 7th. Elsewhere in the fleet, there were many similar close fights for positions. This just goes to show how much the Extra Fleet has developed, with a resurgence in numbers and also being as competitive as ever!

We managed to get 3 races sailed on the final day. Neil Malan also gave us a master class on how to be penalised twice by hitting the same mark two times in a row whilst trying to round it!! (had to include it, sorry!).

The last race, in my opinion, was the most exciting race of the regatta with roughly nine Extra’s all rounding the Wing mark at the same time, before racing down to the bottom mark! Around every mark in this final race, it appeared as if all the extras were within a few boat lengths of one another!

In the end, huge congratulations must go to Neil Malan for finishing in 1st place, followed by Kevin Foreman in 2nd place and James Blair Stock in 3rd place.

Also a very big thank you to Langebaan Yacht Club for agreeing to host such an amazing event along with the organizers for doing a terrific job in running and organizing this event!