Etchells Worlds. Voermann to the Fore! 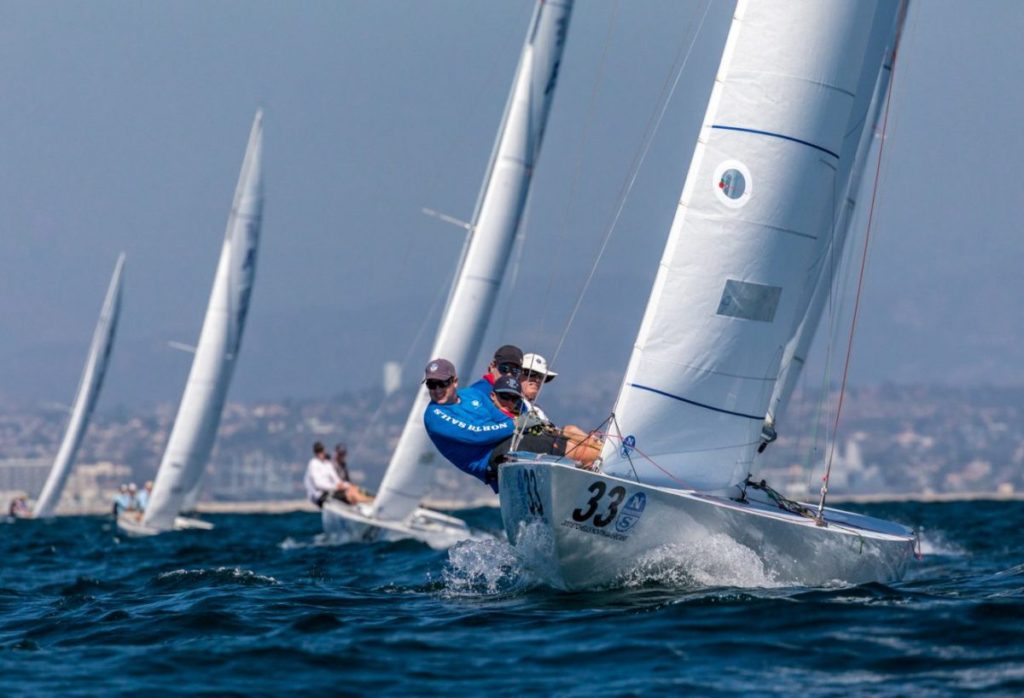 Some may be wondering whether I have finally lost it completely as I write about this event!

Well maybe, but this class and it’s competitors fascinates me every time I read about them, and this year we have a lone ‘Japie’, or more correctly former ‘Japie’, in the fleet in the form of William Voermann. But this is not about him at all, other than to note he was a damn fine sailor and a loss to our sport when he emigrated. So show them the way ‘Willem’!

I suppose it’s the fact that many of the top yachties in the world compete in this class, which fascinates me.

But before going there, let’s have a quick look at what the Etchells really is?

It’s an International one-design racing class that evolved via a competition in ‘Yachting Magazine’ in 1965 when a competition was launched to select a new three man Olympic keelboat. To cut a long story short E. W. “Skip” Etchells, a boat designer, builder and sailor, built the wooden ‘Shillalah’, and took her to Kiel, Germany, where the trials were to be held in 1966.

‘Shillalah’ won eight of the ten races, yet the judges were unable to agree on a winner, so a second set of trials were held the following year. Etchells rebuilt the boat in fibreglass, using the original ‘Shillalah’ as a plug, and went on, in ‘Shillalah II’ to win ten out of the thirteen races.

These two performances obviously did not impress the judges as they chose the Soling!

The boat’s performance had won converts, and shortly thereafter, with orders, the boat went into production, a Class Association was formed with the boat becoming known as the E22 – later in the ‘90s having the name changed simply to the ‘Etchells’.

Today there are 50 fleets around the world.

The Etchells is a fast, stable racing sloop that can be raced competitively and safely by three or four sailors. She can tack in 70 degrees and is extremely sensitive to subtle adjustments in tuning and trim. She has a sleek hull with relatively little wetted surface area, which allows her to move well in the lightest breeze. In heavier winds, she absolutely flies. Her sail plan includes a main, jib, and spinnaker. (Source Wikipedia).

Names like David Curtis; Iain Murray; Chris Law; Dennis Conner; Colin Beashal; Stuart Childerley; Lawrie Smith; Ken Read; Steve Benjamin and John Bertrand are engraved on the winner’s trophy. Many of these helmsmen, maybe all of them, are either Olympians, America’s Cup and Volvo Ocean Race sailors – to show the calibre of sailor, some of whom are even listed as ‘Grandmasters’!

Looking at the list of boat names, there are several owners with a great sense of humour, or loyalty to people and places.

‘African Queen’ is from Nigeria.

‘Alfie’ is sailed by Lawrie Smith who has Richard Parslow as crew. For those who were around in 1980 when the Fireball Worlds were sailed off Durban, Parslow crewed for Kim Slater, the duo winning the event. Parslow was then known as ‘Animal’ due to dressing like a punk rocker and complete with piercings! Incidentally JJ Provoyeur and Terry Twentyman-Jones were 2nd overall and Dave Hudson with Terry Reynolds as crew was 3rd overall.

‘Animal House’ is crewed by a bunch of Aussies!

‘Barry’ does not have a Barry in the crew! Strange name for a boat?

I wonder what ‘Cruel Jane’ did to her crew of Kiwis?

‘Great White Hunter’ – guess what they do in their spare time. But really not a name that will appease the anti-hunting lobby group.

The Aussies aboard ‘Land Rat’ were obviously not well read as kids as they simply have forgotten about the Water Rat!

‘Trekka’ is sailed by a bunch of Aussies. When they named this boat did they do it in memory of John Guzwell’s ‘Trekka’ – or the Škoda powered Trekka which was a light utility vehicle once manufactured in New Zealand. I suppose that we will never know, but hopefully a fine sailor like Guzwell inspired them.

The 2018 Worlds starts today in Brisbane, Australia – with 96 boats competing.

Whichever way you look at it, this is a hot fleet full of top sailors – and it’s going to provide some cracking yacht racing.