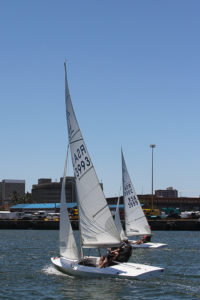 Two Durban sailors, Campbell Alexander Jeremy Kriek, are campaigning in the UK at the moment as part of the F15 70th anniversary celebration , and Cowes Week

Their first regatta over this last weekend was the Flying Fifteen Southern Area Championship, run by the COWES CORINTHIAN YACHT CLUB, and which included the 70th Anniversary race.

In a fleet of 39 boats our ‘flying Durban duo’ finished 12th overall with a best finish of 8th in the final race.

This week, starting today, they are competing in the Cowes Classics Week which runs until 21 July.