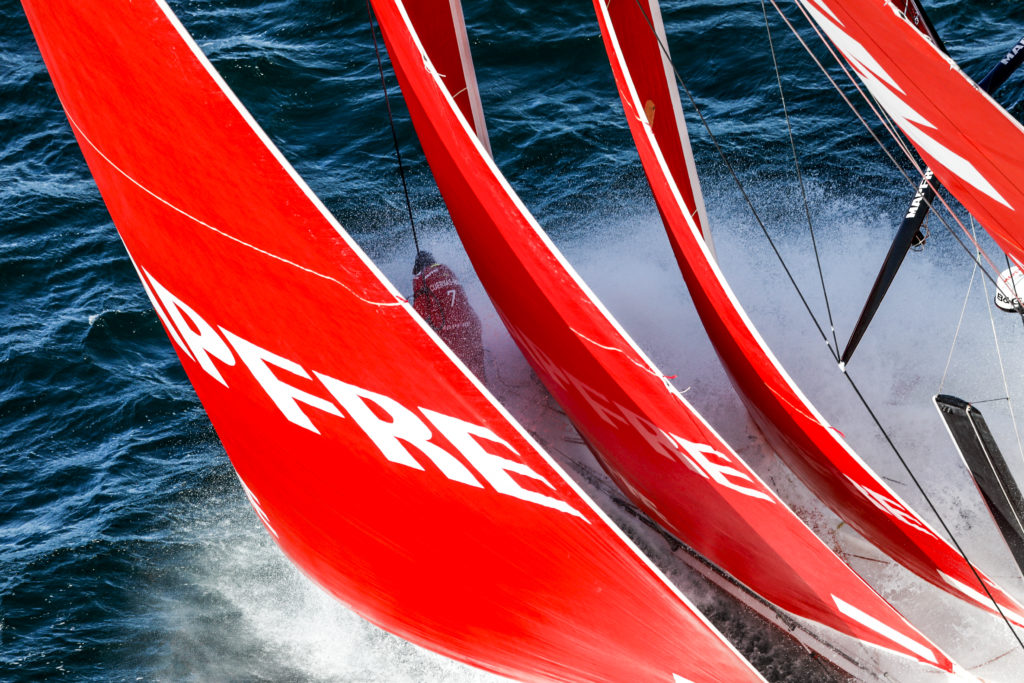 MAPFRE flying every possible inch of sail as they attempt to win the final leg into The Hague.
pic by Ainhoa Sanchez/Volvo Ocean Race

Dongfeng Race Team holds a narrow lead over MAPFRE after one day of racing in the final leg of the Volvo Ocean Race. Team Brunel is in fourth place, behind Vestas 11th Hour Racing.

Rivals Dongfeng Race Team and MAPFRE were locked in a bitter tussle for the Leg 11 lead – and overall Volvo Ocean Race victory – on Friday as they led the fleet towards the Danish city of Aarhus.

One third of the way through the 970-mile sprint final leg from Gothenburg to The Hague the seven teams were today split by less than 20 miles as they charged south through the Kattegat, the strait separating Sweden and Denmark.

After rounding the first course mark off Norway overnight, the leading pair profited from better breeze than their counterparts and extended the gap at the front.

With the second mark at Aarhus, on Denmark’s east coast, just 10 miles away, the two red boats were just one-mile apart as of 1200 UTC, keeping alive the battle that will grant overall race victory to whichever of Dongfeng, MAPFRE and Team Brunel finishes ahead of the others. 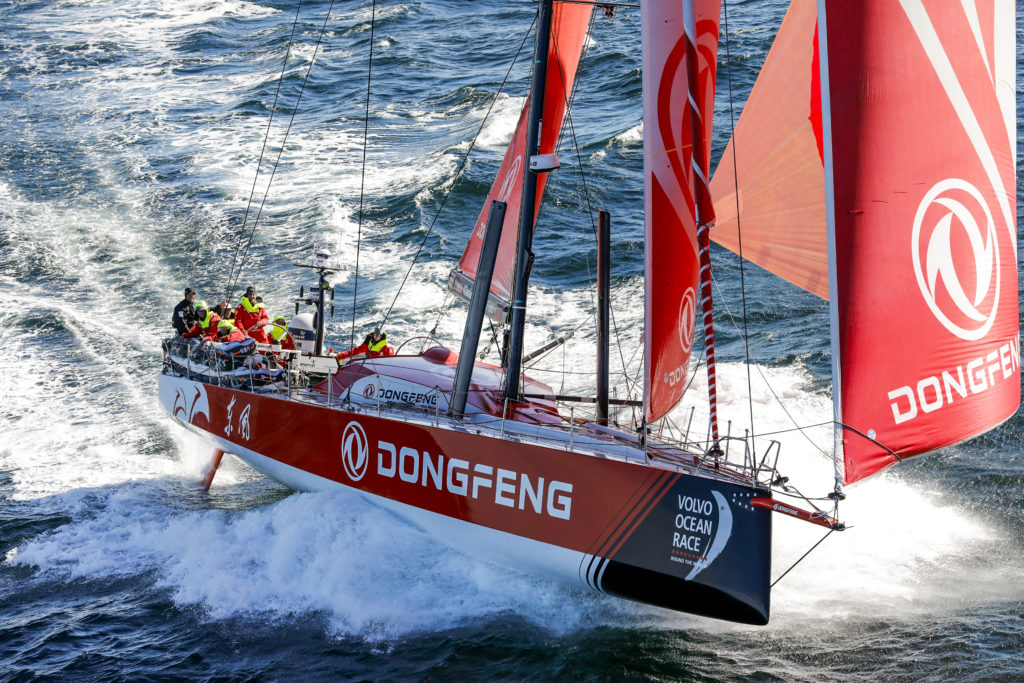 Their closest rivals on the race course, Vestas 11th Hour Racing, were a little under six miles back, in third place, while Brunel held down fourth, but have work to do to narrow a gap of over 15 miles.

As well as being a monstrous battle between the crews, the race for the overall title is also a personal one.

What’s more, if MAPFRE or Team Brunel win the race, either MAPFRE’s Blair Tuke or Brunel’s Peter Burling will become the first sailor ever to complete the ‘triple crown’: victory in the Olympics, the America’s Cup and the Volvo Ocean Race.

But one-third of the way through the challenging final leg, the focus has narrowed to the next manoeuvre, the next transition.

“This downwind section has been pretty tricky – in general there’s been a big extension,” MAPFRE’s Tuke said.

“We’ve gained quite a lot on Brunel, AkzoNobel and Vestas. We’ve managed to stay close to Dongfeng, but for a little while it was pretty scary – they managed to get five or six miles in front of us. As we’ve come into Denmark we’ve compressed again.

“We’re now on one of our fastest sail setups, so all’s good but hopefully we can catch up even more, and, at some stage before The Hague, pass them.” 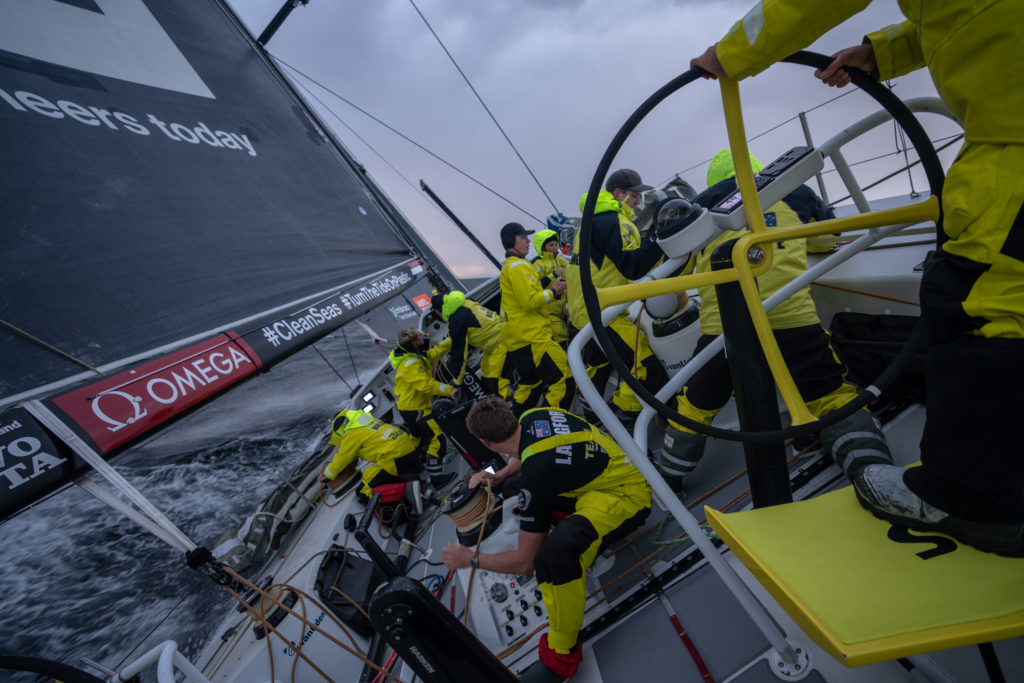 The crew of Brunel battles through a squall.
pic by Sam Greenfield/Volvo Ocean Race

On Brunel the crew were cursing their luck as they watched the gap to the front-runners grow – but had faith in the forecast which predicts the wind to drop coming into Aarhus, providing an opportunity to catch up.

“It’s been a case of ‘the rich get richer’ since rounding the mark off Norway,” Burling said. “The fleet’s been expanding a little, but there should be a pretty good compression as we come into Aarhus. Hopefully we can catch up with them again.”

Skipper Bouwe Bekking added: “We didn’t sail too smart yesterday afternoon and that has become expensive. At the rounding mark off Norway still in good contention, but then it went backwards. We will keep fighting until the end.”

Onboard Dongfeng, the crew were taking nothing for granted.

“We’ve sailed really nicely against MAPFRE and they’re still behind us,” Dongfeng watch captain Daryl Wislang said. “Let’s hope it can stay like that. It’s going to be a battle that’s for sure.”

After rounding the Aarhus mark the fleet will then head north to a virtual mark close to the Norwegian coast, which they will leave to port, before beginning the run south into the Leg 11 finish line at the Dutch capital of The Hague.