Dee Caffari: “I Love the Idea of the IMOCA” 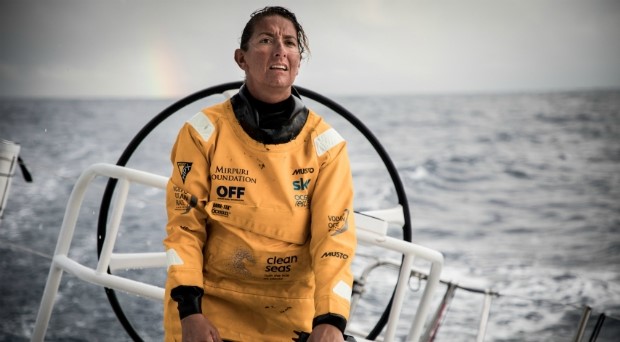 Fresh back from a month in Australia where she finished sixth across the finish line on ‘Wild Oats X’, the Reichel Pugh 66, second overall in IRC, in the Rolex Sydney Hobart Race, Dee Caffari is taking time to plan for a future in which she wants to include The Ocean Race and does not discount a second attempt at the Vendée Globe. Skipper of the first mixed gender youth team ‘Turn The Tide On Plastic’ in the last Volvo, Caffari has sailed round the world six times, completing five racing circumnavigations. She brings the same passion to pressing for improved levels of gender equality in offshore and ocean racing, and educating people to make better environmentally responsible choices in their everyday and sporting lives.

The Sydney-Hobart project seemed to come together really well for you with a great outcome, do you plan to do more together under the Ocean Respect Racing colours?
Stacey put together such a good project in a short space of time. We were lucky we were gifted ‘Wild Oats X’ by the Oatley Foundation which was very kind of them and 11th Hour coming in let us put together a really good programme together. It was really fun to do. The weather was perfect for that boat. And I said afterwards we were lucky to have come second because we can now ask to go back again and try and win it. They are all looking on the business case, what coverage there was and what impact the campaign made and hopefully we can convince the Oatley family and 11th Hour that Ocean Respect Racing is a good campaign. Stacey (Jackson) has some good ideas how to put something together which would build on what we have just done and go through to the 75th (Sydney Hobart) next year.

And so the plan is to go again?
I think there are long term plans or ideas because it worked so well. I think it was a concept that surprised a few people and we proved it works. And it was a really nice way for 11th Hour to get into Australia and have an impact there. We met a few needs and it’s just understanding what is being looked for for us to grow and develop further. For sure there are a lot of aspirations to do more together but it has to meet the requirements for sponsors to continue to invest and fund it.

What reception did you get, from what we could see it looked very positive, but are there still naysayers?
Definitely there are those who were saying ‘oh here we are again an all-women team again’. People want to knock it and put it down we put the sailors together on a really competitive boat. This kind of thinking is highlighted a bit more in Australia and New Zealand where it is still very much as male club and we have been pushing at those doors for a while now. I think it is nice it came together well on the water and with good impact, but also on the periphery as well with our environmental messages, with our beach clean ups, with the grant allocation that we could give with 11th Hour. It was a far reaching campaign in a really short space of time and that stops the naysayers.

It certainly seems like there are major steps being achieved in more women being chosen to race in key programmes?
You have to keep going. You have to keep pushing. Sometimes you can feel quite upbeat and empowered and then you come back to earth when you look at an entry list and you remember that it is not easy. We are still fighting against the majority. There is positive change, but it is happening so slowly. Changing the perceptions of those who are making the decisions, the crew bosses or the people who are putting the teams together, once they are those who have a bit more of an open mind then it will happen. But, as women, we need to show that we are credible, talented sailors not a bunch of girls out to prove a point. There are a lot of talented women out there, there are more girls waiting now to get their Figaro 3s which is an awesome training ground. We have women coming through into the Vendée Globe for 2020 and The Ocean Race can’t go back on the Volvo incentive to have at least one female in the team. We have to keep chipping away. Eventually we will get more girls into the Fast40, the TP52s the RC44s, the maxis. We keep fighting to have the conversation where we are considered quality sailors rather than male sailors and female sailors.

As someone with experience solo and two-handed in the IMOCA and with two crewed Volvo Races as skipper how do you view The Ocean Race the move to IMOCA? I assume you want to go on The Ocean Race, and beyond that the Vendée Globe?
It is interesting to see how The Ocean Race is evolving. It is very exciting that, like with the Figaro 3, the playing field will be levelled again. But timing is difficult. It is asking you to find an awful lot of money at a difficult time, especially in this country – the UK – with the economic and political situation, it is very uncertain, people are very reluctant to part with funds for sponsorship. I am keen to be involved, I want to carry on. I love the idea of the IMOCA. But its hard to talk about the IMOCA and not talk about doing the Vendée Globe, that is the ultimate. It would be interesting to have an IMOCA and push it at the intensity we sail at now on the Volvo and then do the Vendée Globe. It is always an option.

Do you want to skipper your own project?
I have no need, no necessity to skipper, but I definitely want to be involved. If I can’t make it on to someone else’s team and the only way is to find the money myself. I really enjoyed the ‘Turn the Tide on Plastic’ Project. I loved all the extra skills required to get the best from the people around you, but it is hard to raise the money. I don’t want people not to ask me to sail because they expect me to do my own thing. I want people to know that I want to be considered on merits as a sailor, not that I am just a ‘chief’. I would want to be there as a team sailor, if that ended up as my campaign with my sponsors then so be it. I am always looking though. Every conference, every talk I do, I remind myself ‘you could be talking to your potential next sponsor’.

And could you come back to the Vendée Globe?
I have enjoyed the team sailing I have done. When people ask would I do a Vendée Globe again or do more sailing, and when I do the solo coaching, I realise how much I remember, but the level is so much higher now, the field has moved on so much, I would need a decent amount of time to train myself back up to that level again. I would love to be able to test myself again at that level, though, because I am such a different person, such a different sailor now. I have grown so much. I look at Sam (Davies) with such inspiration, I would love to be back where we were in 2008 and just see. I would love to be there, I really would. But in the UK it is too hard right now. You go to a sponsor and say ‘I start in France I race around the world non-stop I come back to France and you will get a wonderful return mainly in France’ that is hard.

In the sailing world the message is slowly getting home about single use plastics, what do you see as the next steps we should be taking?
There are so many things in sailing which have become naturally considered as throwaway, I would like to see us moving towards a much more circular economy generally. We were talking about it all after we finished the Hobart. Grand prix programmes can go through two suits of sails in a season for example, we need to see these being re-purposed and reused. I really do think there is a responsibility on the part of North Sails and the other big sailmaker to be addressing that and taking some responsibility. And also there are so many dinghies and small boats which are in boat parks around the world which can be re-purposed or recycled into material for roads and all kinds of things.