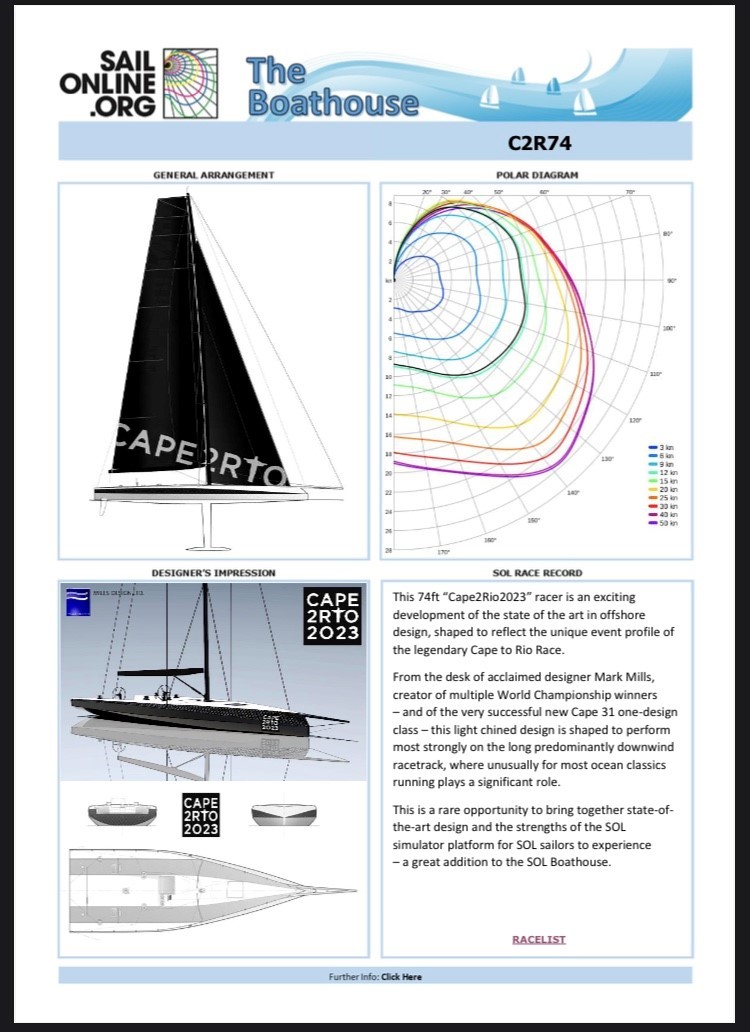 To commemorate the 50th anniversary of the 1971 Cape to Rio race, the organisers of the 2023 race in collaboration with sailonline.org and designer Mark Mills bring you an exciting online platform to hone your navigation skills between Cape Town and Rio de Janeiro.

Of special importance is the fact that Mark Mills, the designer of the successful Cape31, has penned a Virtual 74 foot boat, the C2R74, especially for the Cape to Rio Virtual Races.

The C2R74
Mills describes the boat as follows: “Our 74’ Cape2Rio2023 design is an exciting development of the state of the art in offshore design shaped to reflect the unique event profile of the legendary Cape to Rio Race. This light chined design is drawn to perform most strongly on the long predominantly downwind racetrack, where unusually for most ocean classics, running plays a significant role.”

A younger, but larger cousin of our standout Cape 31 One Design, they share some DNA, especially in the combination of light displacement, deep draft, and narrow waterline beam for low drag when upright. Increased IMOCA-derived bow volume reflects the predominantly off wind bias and ensures a bow-up running trim like her smaller sibling, while control is assured with twin rudders. The light weight and low wetted surface in VMG downwind mode promise the fastest elapsed time, while the deep draft and added stability from the hull shape when heeled, allow the crew number to be reduced to the minimum, as well as the associated weight of gear, food, and stores.

Above deck the sizeable sail plan is designed to allow the small crew to continuously get the most from the boat using powered winches, with an almost exclusively furling downwind inventory to reduce the amount of time required on the low windage foredeck. This drive towards small crews effectively sailing very powerful yachts offshore, opens up the possibility of elapsed time records falling dramatically in the Cape2Rio 2023.

Sailonline.org
Sailonline.org is a non-profit, non-commercial sail-racing navigation simulation run entirely by volunteers. All races are free and each SOLer (a Sailonline racer) gets exactly the same boat. The challenge is navigating through the weather.

Sailonline.org uses almost real-time weather downloaded from NOAA while the boat physics are considered to be the most life-like of any online simulation. Our virtual C2R2021 Race will open for pre-race practice on Monday, 28 December, to give everyone plenty of time to familiarise themselves with the performance characteristics of the new C2R74 design.

We welcome existing members of Sailonline.org and anyone else interested in racing online to join up on the website – www.sailonline.org – between now and the start of C2R2021, where there are always races available for you to hone your skills.

The Cape to Rio Race. Some Facts
The Cape to Rio race has a proud tradition of fast sailing around the dominant South Atlantic High Pressure System that guards the direct route between the city of Cape Town on the southern tip of Africa and the carnival city of Rio de Janeiro in Brazil, South America. The first race was in 1971 and since then there have been 16 more South Atlantic races.

Sign Up and Enter Now
Sign up online (Sailonline.org) now to race “virtually” and commemorate the 50th anniversary of the first ever Cape to Rio race that started on 16 January 1971. 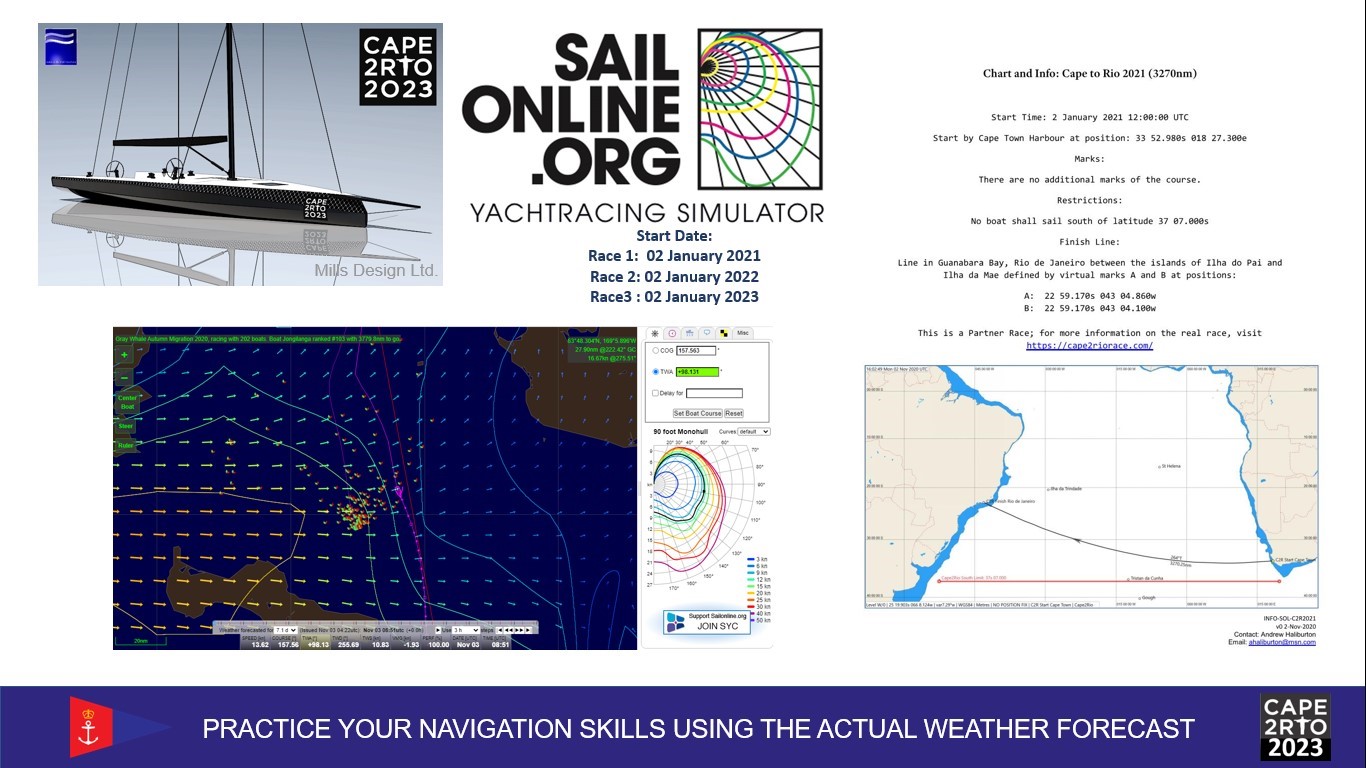