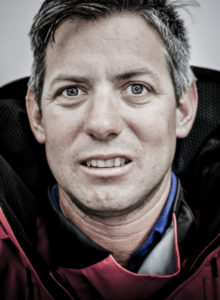 On day 3 as the fleet makes steady progress south past the UK and towards Northern France, skippers and crew are focussing on the next challenge; the Bay of Biscay, notorious for violent storms and heavy seas.

Skipper of second placed ‘Sanya Serenity Coast’, Wendy Tuck, reports: “This morning we wake to a breeze still on the nose and we are about to start our passage across the Bay of Biscay. At the moment, it is being kind to us, but it does have a bit of a reputation of not being very nice.”

Ahead of the fleet, the weather is changing somewhat. A new low moving southeast across the race track should reach the Portuguese coast by the weekend. Whilst it does not look particularly strong, it will provide several tactical options for the twelve teams.

Over the last 24 hours, positions continued to change on the leader board and 98 nautical miles now separates first placed Unicef from Greenings, in twelfth place, who selected a more westerly route as it entered the Celtic Sea yesterday.

The front four leaders, who broke away with the strong flowing tides in the Irish Sea, remain close, with 18 nautical miles separating ‘Unicef’, ‘Sanya Serenity Coast’, ‘Visit Seattle’ and ‘Dare To Lead’.

Skipper Nikki Henderson, on third placed ‘Visit Seattle’, said: “Well, the conclusion of the last 24 hours is that Wendo and Bob are really, really good at making their boats move approximately 1 knot faster than us. Definitely a frustrating night, but that’s racing for you!” 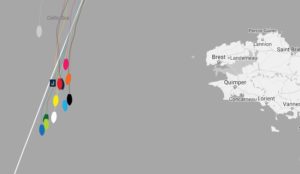 Not taking his lead for granted, ‘Unicef’ skipper, Bob Beggs, reports: “On the AIS we have a constant reminder of the competition with ‘Visit Seattle’, ‘Sanya Serenity Coast’ and ‘Dare To Lead’ helping to keep our competitive juices flowing.”

And the competitive spirit is very much present further down the fleet.

‘HotelPlanner.com’ and ‘Liverpool 2018′, in tenth and eleventh place respectively, are jostling for position and are “currently yo-yoing” according to the latter’s skipper, Lance Shepherd.

Gaëtan Thomas, skipper of ‘Garmin’, currently in seventh place said: “We are trying to catch up boat by boat, now we are nearly up with ‘Qingdao’ and ‘Nasdaq’.”

Meanwhile, Rob Graham, skipper of ‘Nasdaq’, says: “Our focus is on chasing down Dare To Lead, Visit Seattle, and Sanya Serenity Coast, whilst staying ahead of the group chasing us.”

On ‘Dare to Lead’ South African skipper Dale Smyth reported this morning that he has been down with a cold for the last 24 hours, but more importantly it also feels like ‘Dare To Lead’ is off pace despite the crews efforts.

“It’s frustrating to be losing mileage; the next few days will be critical routing trying to transition into Portuguese Trade Winds. Anyway, we will keep pushing our hardest and pray for some tactical advantage further along” said Smyth.