Clipper Race. So Near & Yet So Far for Smyth 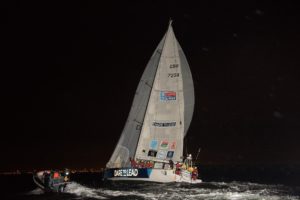 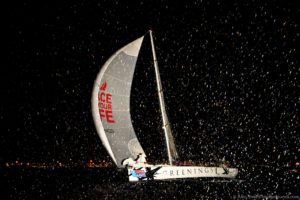 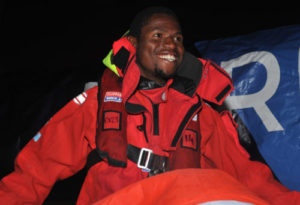 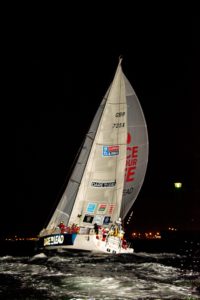 It was a case of being so near and yet so far for Dale Smyth, skipper of Dare to Lead, as he was just 17 minutes shy of taking line honours on leg 2, and leading the fleet into his home port.

Victory for leg 2 went to Greenings.

Let’s face it though, with many more legs to still complete, Smyth and his crew have ample opportunity to gain leg victories – and the major prize being the overall race winner.

He brought the rain too, and this did not deter his supporters and fans who braved the weather to see him in at night.

Arriving back to home soil, Dale said: “It’s incredible and this is going to be the highlight of my race for sure – homecoming, seeing my kids and my wife and just being in my city. To give Andy Woodruff (the Interim Greenings Skipper) his due, we tried all sorts, but he just had that little bit of pace on us. After 3500 nautical miles, he was around 3 miles ahead so we are talking a very small margin. That’s the nature of this game.”

Whilst Dare to Lead missed out on the finish line victory, the team is expected to end up topping the leaderboard as it chose to utilise its Joker Card, a one-use tactical tool, for this race, meaning its 11 race points are doubled, resulting in a whopping 22 for this stage.

Also onboard Dare To Lead was Nqoba Mswazi, 25, from Durban. Nqoba first competed in the Clipper Race in the 2013-14 race, he went on to gain his Yachtmaster Ocean certificate of competence under the instruction of his now Skipper Dale Smyth here in Cape Town. A member of the Sapinda Rainbow Foundation, which aims to provide life-changing opportunities to under privileged South African youths, his goal is to use his experiences and qualifications to pursue a career in sailing.

Waving the South African flag proudly as he arrived home, Nqoba, who has been on board with the team since the Clipper Race started in Liverpool, England on 20 August, said: “It was my first time sailing back into Cape Town with a big crowd waiting and cheering for us, so it was a great welcome back home for me. I am really pleased to have done Leg 2 on this race. It was shorter and harder than Leg 1 but it was a good one great conditions, very tactical at some stages and good sailing for us.”

It is the second consecutive stage win for the Greenings team, which featured two South Africans on the race into Cape Town. Andy Sutherland, 48, from Johannesburg is married with three young children and has always wanted to sail across the Atlantic Ocean.
Upon arrival, Andy said: “The race was fantastic. We had some incredible winds, some incredible seas, sort of what I was expecting, but it was an incredible experience. It’s fantastic to arrive back in to South Africa – I’ve got loads of family here, my sister, brother and parents have come down from Johannesburg so it’s been a perfect turnout for me and for all of us. For Greenings and the team, we all worked hard. We had loads of fun, we had a lot of laughter and we had a lot of challenging times but it all turned out alright in the end. It was fantastic.”

Fellow crew member, Janette Potgieter (35) is a Corporate Investigator who was born in Pretoria and had no prior sailing experience before beginning her Clipper Race training. She said: “There is no one word that can describe what we have just gone through. We have gone through 15 days of rough seas, high winds, light winds, laughter, a few tears, it’s an emotional roller-coaster but overall absolutely stunning.”

Janette’s Clipper Race experience will continue beyond Cape Town to Fremantle and the All Australian Leg and she said of the sailing conditions: “We had something of everything – we had sunshine, we had storms, we had hail, we had rain, from 40knots of wind to next to nothing. I think Leg 2 has prepared us even more for Leg 3 so I’m looking forward to the next one.”

Andy Woodruff is the Interim Skipper for Greenings after the original Skipper, David Hartshorn suffered an injury on Leg 1 and said: “I feel great about the race. It’s really good for the team after what they went through on Leg 1. This time they went out and crossed the South Atlantic to South Africa and won again so I think that says more about the team than anything else.

“It’s all about keeping things simple and not working the crew too hard and having a good time. We did push the boat when the openings came up and took advantage of the tactical situations that arose.”

It is the second consecutive stage win for Greenings, which also set a new Clipper Race record for the most nautical miles covered in a 24-hour period after notching up 329 nautical miles on Day 9.

Completing the podium positions, Garmin finished in third place just over two-and-a-half hours behind the race winners. Skipper Gaëtan Thomas said: “It’s a good feeling to have clinched a podium, it’s a big relief after we worked so hard.”