Clipper Race. It’s Off Around the World Again 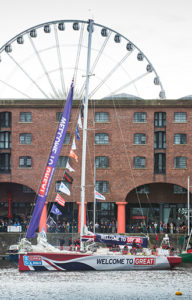 The biggest ever edition of the Clipper Race – one of the world’s toughest endurance challenges – got underway on Sunday on the River Mersey, in Liverpool, in front of thousands of supporters.

The day started with Departure Ceremonies with family, friends and supporters looking on from the Albert Dock colonnades as each team had their moment on stage before boarding their yachts.

After an emotional slipping of the lines, the teams paraded under sail up the River Mersey for the crowds of onlookers. Spectators had come from all over the country to be in Liverpool for this special occasion and were not to be disappointed.

A cannon blast marked the start of the race in sunny conditions with strong tide. With winds against them, the first mark was a test of trimming, tacking and spotting the wind.

As the excited crowd looked on, ‘GREAT Britain’ was the first team across the start line with ‘Sanya Serenity Coast’ and ‘Garmin’ less than a half a boat length behind.

With a short inshore circuit getting the race underway, ‘Dare to Lead’ led the way over the line on the course’s return loop with ‘Garmin’ less than half a boat length behind.

‘Greenings’ and ‘PSP Logistics’ initially struggled in the light airs and strong tide whilst ‘HotelPlanner.com’ faltered on the start line, but received one of the loudest cheers as it rounded the mark and has managed to keep in touch with the fleet as the teams raced into the Irish Sea.

After the excitement of starting in front of the masses, the test of endurance will now get underway as the twelve-strong Clipper Race fleet heads 6,400nm, the equivalent distance of ten Fastnet Races, through the Atlantic Ocean towards Punta del Este, Uruguay. 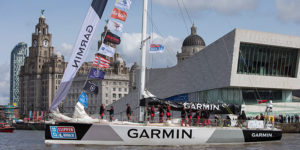 Legendary sailor and Clipper Race Chairman, Sir Robin Knox-Johnston, the first person to sail solo, non-stop around the planet almost 50 years ago, founded the race to allow anyone, regardless of experience, the chance to experience ocean racing.

He said: “Over the next eleven months, our crew and Skippers will get to face everything Mother Nature can throw at them. Upon their return they will have sailed across the world’s greatest oceans. Very few people get to say that.”

He added: “The Clipper Race has got bigger and better with each edition and I can’t help feeling incredibly proud as I watch our crew head off on what will certainly be a life changing journey.”

Greg Schey, a 27 year old doctor from Swansea who is sailing on ‘Qingdao’, said: “This is something that I’ve always wanted to do since I was knee-high to a grasshopper. It’s one of the best adventures that you can possibly imagine. There is definitely part of me that wants to prove something to myself that I can do this.”

This opening leg of the eleven-month series will take approximately 35 days to complete and is the longest ever in the race’s 21-year history.